Wrestling Preview: No. 4 Penn State vs No. 14 Northwestern 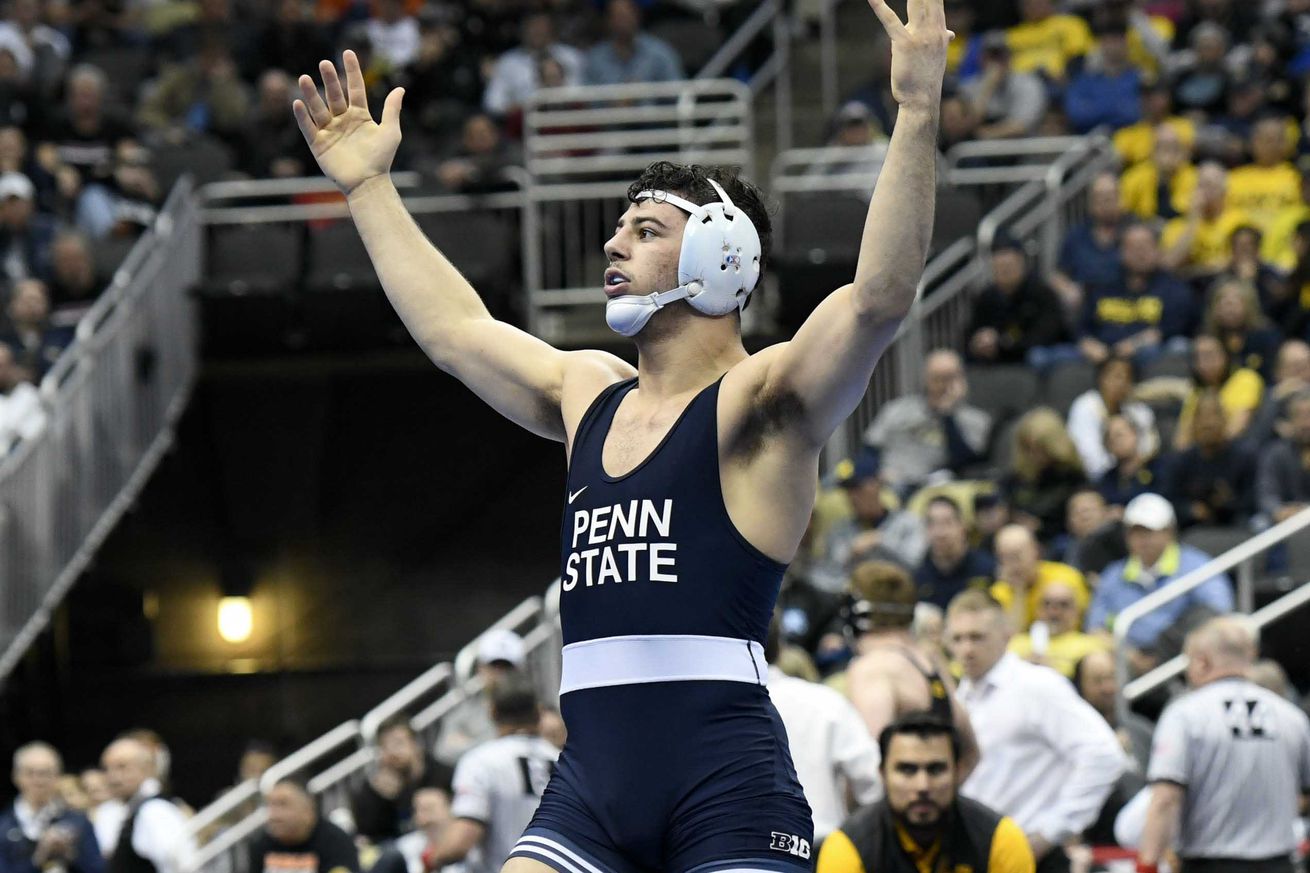 While the Nittany Lions got Shakur Rasheed back into the lineup on Friday, starters RBY, Brady Berge, and Vincenzo Joseph all did not wrestle on Friday; according to the voice of Penn State wrestling, Jeff Byers, Cenzo was sick and Berge’s not close to being ready to return after his early-season injury. That means that the outcome of this dual meet, much like Friday’s with starters on the bench, could very much be up in the air.

Northwestern, like much of the Big Ten, is not as talented top to bottom as the Nittany Lions, but they’re a deep squad and have talent at key weights. This could be a tight dual if you’re a PSU fan, especially if Joseph is still out. I’m going to presume, in these previews, that Cenzo and RBY will be back in the lineup for the Lions.

Not sure if Meredith had the bug that kept his teammates out on Friday night, but he came out remarkably flat on Friday and not what I’d hoped or really expected. I just hope he has more energy (and offense) on Sunday, and can keep the damage to a minimum.

I’d take a healthy RBY over Seabass most days, but I’m not sure that RBY is healthy. So I’ll go conservative and pick Rivera, who’s had some health issues himself this year, with the hopes that RBY gets him back in the RAC.

Lee underwhelmed me on Friday, but then I tell myself he won by bonus against a ranked wrestler. And against Northwestern, he’s not facing a ranked wrestler; he’s gonna win, it’s just a question of by how much.

Verk performed admirably on Friday, but Thomas is a much tougher animal. He can do it, but I expect it comes down to a last second takedown that Jerod just can’t make as Thomas backs up and isn’t called for stalling to finish it.

Ryan Deakin wanted badly to be a rival of Jason Nolf, but if even Tyler Berger can’t do it, Deakin didn’t have a chance. But now both the Husker and Nolf are gone, so Deakin’s number one, facing a backup in the PSU lineup. Bo Pipher faced a terrible call in his Friday night bout that put him in a 4 point hole instead of the one point that was originally called, and could never quite finish it – but his opponent was not of Deakin’s calibre. Let’s hope Bo can stem the bleeding.

A Vincenzo Joseph who is recovering from illness is still a Joseph I’d take over most guys in the bracket, and today is no exception; he should get bonus, the question is, how much.

Hall always wants the pin, trying to take the mantle from his former teammate Bo Nickal; on Friday he was super close, but settled for a DQ instead. The pins haven’t come at the rate of Bo’s this year, but he’ll still try to make up for lost time and make a run for the Hodge. It starts today.

Many, myself included, expected higher scoring from Brooks on Friday – but looking gassed and still getting a last second, last period counter takedown is still pretty darn impressive. His career is early (‘member how Hall’s started? I ‘member) and he’ll only get better from here on out.

Welcome back to competition, Shakur Rasheed!

In his first weekend back in competition, Shak shook off some rust on Friday and will look to get back into his previous fighting shape throughout the rest of the season. I think he pulls it out on Sunday, with a much bigger decision than his tentative action on Friday saw.

Big Snacks had a tougher test on Friday than he has on Sunday, and he passed with flying colors. He’s more of a traditional heavyweight than Cassar was for us last year, which means some lower scoring but really tough riding, and a lot less of a weight disparity (if one at all!). I’m excited to see how far he goes.

*The Penn State athletic department, in its official capacity, uses Intermat Tournament Rankings in all its match literature; in those rankings, Penn State is #4, and Northwestern is #12. I’m using Intermat’s Dual Meet rankings because this happens to be a dual meet.