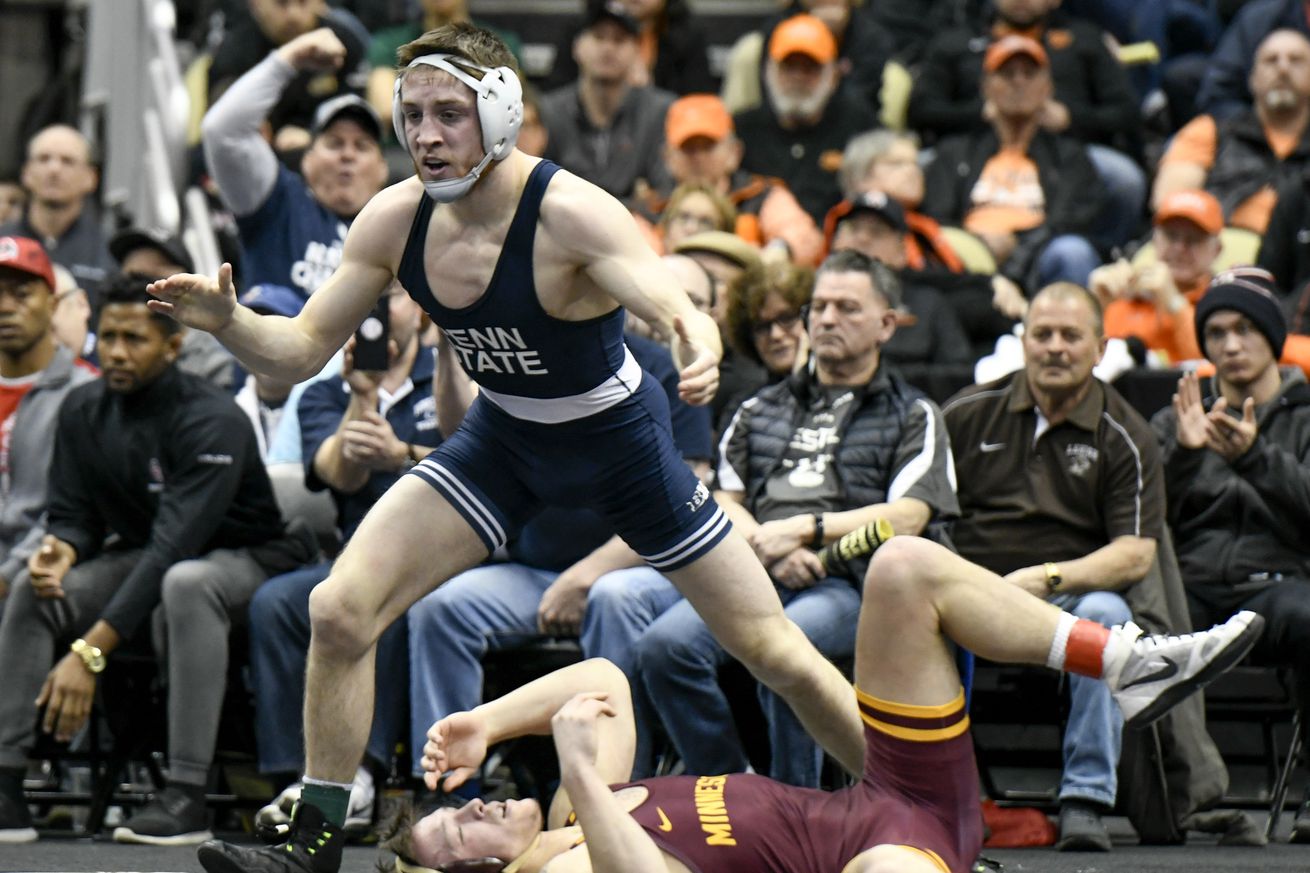 Stay nestled inside while the weather’s bad outside, and watch the good guys in blue win at wrestling.

What a difference a year makes. Last season saw the Scarlet Knights crown their program’s first NCAA champions with Nickal, Nolf, Taylor, and Retherford’s now-Scrap-Life-mate Anthony Ashnault, who used up his eligibility, and some other guy you all might know who’s currently taking an Olympic redshirt year. This season, while they have a couple of ranked wrestlers, there are none with so high a ceiling.

As for the good guys, after a somewhat lackluster performance on Friday against the Illini with backups at 133 and 165 , the Nittany Lions rebounded well on Sunday against Northwestern , including a surprise performance in a backup role by Creighton Edsall. I expect to see more of a build on that this week, and almost all starters back in the lineup (with the eleventy-billionth lineup we’ve seen for PSU this season).

What: #3 Penn State* vs Rutgers

Meredith looked much improved on Sunday compared to Friday, and came close to the upset. He has a real shot at the upset this weekend, if the Meredith that made Teske transfer shows up – but I’ll predict the favorite here.

This should be the best match of the evening, and I’m not sure that’s even arguable. RBY on his game, like he was last week, can put this away quickly. I think it’ll be a fight to the end, but some funkiness on Roman’s part does the trick in the final minute.

Nick Lee’s behind Pletcher in the rankings, which makes sense when you see who Pletcher’s beaten. But I keep thinking how RBY beat Pletcher in Columbus last season, and I think Lee can take him in State College. It all comes down to the dual a month from now, in terms of the regular season crown. This week is just another tune up to that.

Verk was solid last week, and should continue that this week. I’m still not sure who’ll end up being the PSU rep at tourneys at this weight, but regardless of who goes here, I think the PSUer comes out on top.

Bo Pipher put up a good fight against this weight’s top ranked wrestler last week, despite the loss. This week will likely be more of the same, with a hard fought match but coming up just short. If Berge happens to be back, this’ll likely be different, but I’m assuming that this’ll still be Bo.

Some thought that Cenzo might be sluggish on Sunday after sitting out Friday due to sickness, but alas, that was not the case. The now two-time Ridge Riley winner had a first minute pin last week, and this week should be more of the same.

Last week, Hall was the bright star on Friday when he forced a DQ and got a tech fall on Sunday. There’s not really anyone who can challenge him this year now that Zahid’s up at 184, and Marky should roll.

Aaron Brooks can make some noise in March in this weight, especially if he’s in the opposite side of the bracket from Zahid. The Big Ten’s not super strong at 184 this year so he’s got a real shot at taking the conference title – and provided he stays undefeated until then, that could be enough.

Shak makes his first appearance on the mat and now in the rankings, and the opponent who took him down on Sunday is now ranked (one spot ahead of him). He looked every bit the wrestler who’s had 9 months off last weekend; let’s see if he can rebound this weekend and work his way into March shape.

Nevills had a fairly good weekend last week and can continue this week to work his way up, but this weight is incredibly stacked, both in-conference and nationally. It’ll take an upset or three to make some noise here.

*The Penn State athletic department, in its official capacity, uses Intermat Tournament Rankings in all its match literature; in those rankings, Penn State is #2. I’m using Intermat’s Dual Meet rankings because this happens to be a dual meet. Rutgera is unranked in both metrics.