The Shot That Delivered The Big Ten Championship 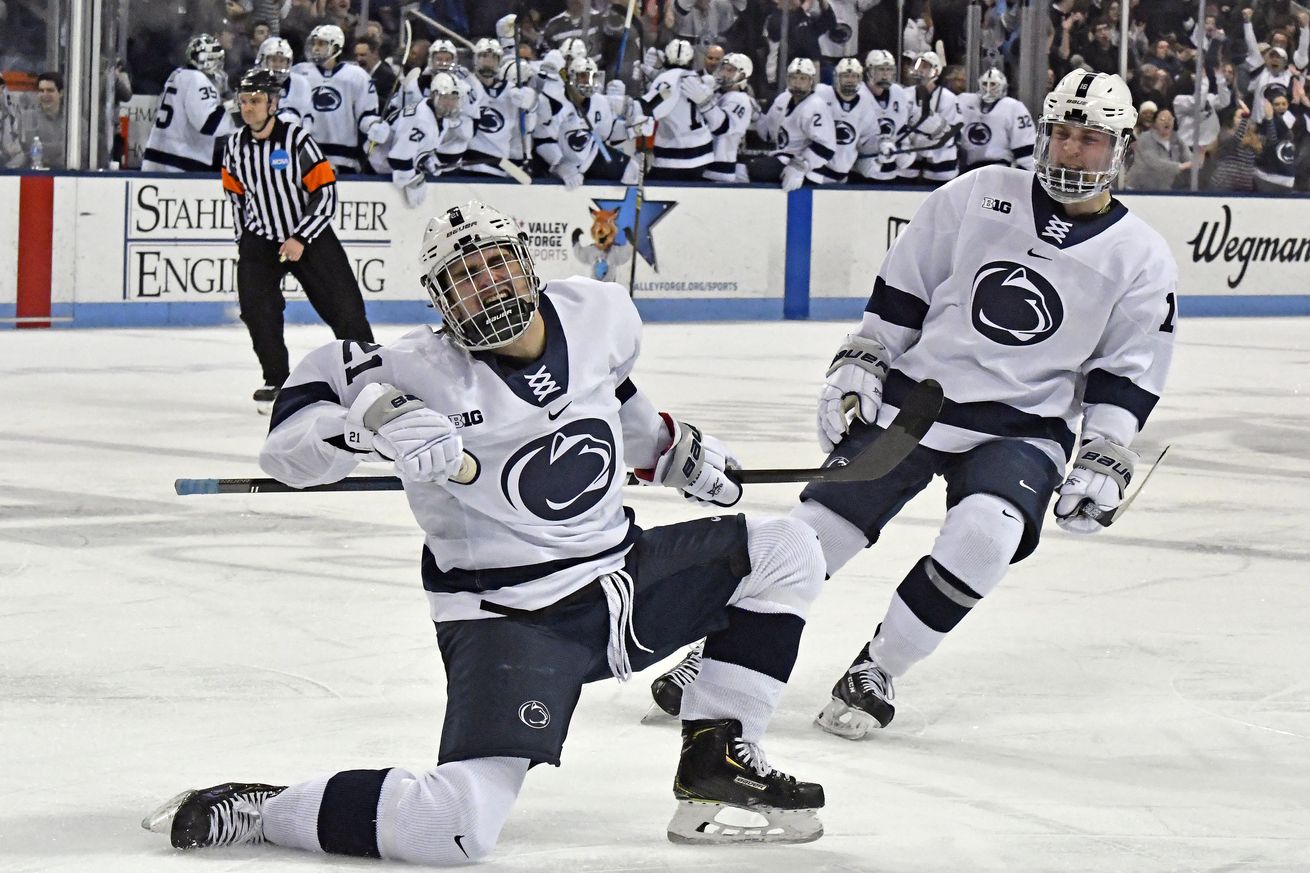 We’re moving forward with a quick look back.

There was a championship awarded a couple of weeks ago and Penn State was happy to collect it. The Big Ten regular season championship will be the final on-ice title and as such, it was the high point of the 2019-20 season.

Kevin Wall, a freshman that played well in 26 games, scoring 2 goals and 5 assists, put the puck in the net for the win midway through the final game of the season. Six days later with Penn State on a bye the win clinched the title for Guy Gadowsky’s team.

The Big Ten title is a sign of season-long success, something that the program has tried to attain while rising in the national standings. Gadowsky said last season that he feels that the regular season title is more impressive than the post-season, since it only takes a handful of wins, a team getting hot for a couple of weeks, to get the Big Ten Tournament championship. The team holds that achievement proudly for the first time. There will be a banner raised next fall inside the Pegula Ice Arena that will remind us of the season for years to come.

Let’s take a look at the goal that got Penn State a 3-2 lead against Minnesota on February 22, the last time the team took the ice.

Instead of shooting the puck through a crowd, or using the sticks of Nikita Pavlychev and Kevin Wall in front of the net, freshman Mason Snell decided to play the puck behind the net to give Pavlychev a chance to make a play. The 6-foot-7 forward took the puck and almost wrapped it around into the net but instead it went to Wall, who snapped it in.

Pavlychev will move on to the professional ranks in the coming weeks but Snell and Wall will play a major role for the team next season. It was a great moment for the players and the team. At the time it seemed like it would be a great achievement along the way to what was going to be a historic post-season for the program.

Now, looking back, it was the moment that we may remember most about the season. Had the Lions lost that game, the team could have finished as low at fourth in the conference standings, outside the top-10 in the PairWise, on the bubble but within the field for the NCAA Tournament.

Instead, they will be remembered as champions, having clinched the highest PairWise Ranking finish in program history as well.

Down But Not Out

We think first of the players, coaches and fans that lost out on the post-season this year due to its cancellation but we in the media lost a little something as well. The Black Shoe Diaries has assembled a solid team that covers the Penn State hockey program. Colin Piatt has been on the beat since day one for the Lions at the division one level, having covered as many games from the press box as any other hockey writer, possibly the most. His reporting and knowledge of the team is top notch.

Colin gets quotes from the players and the coaches following the game. Considering there isn’t a very large number of media entities that do wall to wall coverage of the program, there are times that if we didn’t publish a quote it would not get published at all.

Heather Weikel is the photographer that provides the still-frame images that we use for our articles. She got the picture for this article at the moment that Kevin Wall went into his celebration after scoring the winning goal against Minnesota. Getting a shot like that is like sitting in a tree stand, waiting for three hours for a deer to come by, then shooting it the moment it passes in front of you. Only this way no one gets hurt.

Almost all other photos that you see on the Black Shoe Diaries come from a database of pictures provided by Getty or USA Today, other than the pictures that Heather provides. Getty and USA Today do not take hockey photos, so were it not for Heather’s work, going to the games and being in the right spot at the right time, we would have to imagine what took place, rather than being able to see for ourselves.

She got this incredible picture of Evan Barratt’s lacrosse-style goal last season, the only photographer to get it in real time so cleanly. The play made ESPN’s top ten that night.

I was the first full-time hire to work the hockey beat for the Black Shoe Diaries so I have seen the program and our coverage grow from the very beginning. The videos that are included with our articles are captured and converted in real time so that the fans, who can’t always make the game, can see what happened. I’ve been capturing and editing the clips in real time for the recaps for several years now. It’s something I enjoy doing and sometimes the videos get in the tens of thousands of views, so we know that our audience enjoys them as well.

The three of us are fans just like the rest of you and while we present our coverage as straightforwardly as possible, the loss of the post-season hurt us as well. We felt all of the heartbreak of not being able to see the games as the rest of the fans. On top of that, we have a familiarity with the players and coaches that makes it a little more personal.

The three of us were looking forward to the possibility of going to the Frozen Four if things went well for the team. It would be fun, as it would be for any fan, but it would also be something we could talk about for years to come, having been a member of the media for the event, able to go behind the scenes with the team before and after the games.

Our loss is small compared to the people on the team but to us it was an added kick in the teeth. I can’t speak for Heather or Colin, but having taken videos at places such as the Rose Bowl, Fiesta Bowl and Big Ten Championship football game, I can say there’s a rush that can be similar to the athletes’, and a competitiveness among the media to get the best shot, quote or story. It’s fun, in some ways a part of the payoff for a lot of work done throughout the year. The better we do the better publicity the team will get, the more fans will enjoy the coverage.

While the season ended abruptly, two weeks after Penn State played its final game, we are still excited to cover the team. There will be announcements in the coming days and weeks when players sign professional contracts. We will give each player a proper send-off. It is a continuation of the process of watching players such as Denis Smirnov, Nikita Pavlychev, Peyton Jones, Liam Folkes, Brandon Biro, Kris Myllari, Nate Sucese and more as they complete a journey that began in Hockey Valley four years ago.