What It Takes to Win in College Football

In PSU Zone’s Grading the Lions: Nebraska, I postulated that “it is important to look the part of the team you want to be.” James Franklin consistently attracts athletic skill players, many that contribute in multiple facets of the game. Each is capable of producing a splash play whenever they touch the ball. Chris Godwin caught nearly everything thrown near him, and some even not thrown near him. He would turn a 15-yard pattern into a 70-yard touchdown. DeAndre Thompkins is an absolute weapon on punt returns while adding big-play capability as a receiver. Mike Gesicki is a matchup problem, with the size of a tight end and the speed and range of a receiver. He loves catching jump-ball touchdowns and does it a record pace. Trace McSorley is as dangerous with his legs as he is with his arm. He has another gear late in games that can will his team to victory. And of course Saquon Barkley, a natural athlete, is effective as a pure running back, as a receiver, a kick returner and can even throw on occasion. 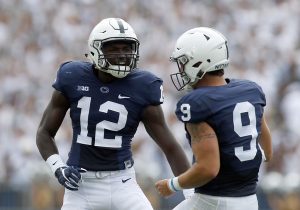 QB Trace McSorley, WR Chris Godwin and RB Saquon Barkley are a few of the many “splash
players James Franklin coached in his first four seasons at Penn State

When James Franklin arrived in Happy Valley in early 2014, he had a skeleton crew and the program was still under the heavy weight of scholarship reduction sanctions. His task was to leverage the limited resources he had, recruit his tail off over the next four weeks, and to turn out the best product he possibly could. With such a short window before signing day that year, Franklin had to hedge his bets as to which positions to target. A 2014 article by SBNation described the five hardest positions to recruit as the following (in order), and I’ve listed the signees as of signing day 2014 for the Lions: 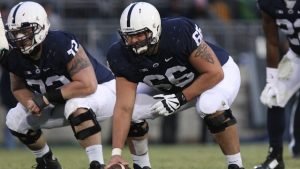 Defensive lineman and tight end sustained their levels of performance throughout the sanction era. The 2014 roster boasted four future NFL starters between those two positions (Carl Nassib, Austin Johnson, Anthony Zettel, and Jesse James). Haley, Oruwariye, and McSorley transferred their commitments to Penn State from Vanderbilt to follow James Franklin to address corner and QB (their contributions are well-known).

But with all the success of the defensive line, the offensive line has underachieved year after year. In the 90s, the Big Ten had a dominant offensive line, while the defense struggled to keep up with the “SEC speed”. With the rise of Nick Saban’s Alabama, the SEC has reinvented itself to become the most physical conference. It is this physicality, mainly at the offensive and defensive lines, that may explain why they have had so much success in recent years.

Of the 129 FBS teams, there are only 12 that rank in the top 30 in at least three out of the following four line-centric categories: total yards allowed, sacks recorded, sacks allowed and rushing yards. The teams are broken down by conference (current CFP ranking in parentheses):

South Florida is ranked in the top 30 of all four categories. Despite not being ranked in the current CFP, USF is 9-1, and Troy and Appy St. are tied for first in the Sun Belt. That combination of metrics is by no means comprehensive, but it serves as an adequate sample to try to explain why the SEC has been dominant – they have four teams on this list. When physical teams play a game against a team with better skill players, they can wear them down in the second half by running the ball and stopping the opposing offense. Alabama turns out NFL linemen every year. Ohio State used these strengths to claw back and defeat the Lions this season (by fourth quarter, their methodical and increasing dominance in the trenches rendered Penn State’s offensive line as punch-less as Ivan Drago at the end of his fight with Rocky). Wisconsin has been the most consistent Big Ten team over the last decade, always piling up rushing yards and producing sack masters like Watt brothers. Washington has seen a sharp rise in success over the last few years, possibly due to the better line play, and TCU is consistently challenging for the Big XII crown. Last year’s champion Clemson has overtaken Florida State as the class of the ACC, in position for a third straight CFP berth. It doesn’t seem like Deshaun Watson was the reason after all; at least part of their success has to be attributed to the good line play this year [after Watson graduated].

Penn State’s reserve defensive unit again illustrated the impact of the sanctions against Nebraska. Having up-and-down roster talent at the 4- and 5-star level is the goal, but not the current state. Alabama and Ohio State exemplify why this is so critical. While James Franklin is able to consistently recruit top skill players, his staff must focus in the immediate term on bolstering the offensive line and continuing the emphasis on the defensive line. Fortunately, the data shows that this focus is shifting accordingly. Per ESPN, the number of 4 star (or above) lineman recruits for Penn State since 2014: 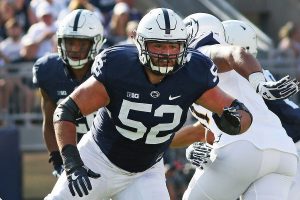 An injury to key offensive lineman Ryan Bates could have been the catalyst to the two road loses at Ohio State and Michigan State this season.

It seems to take about 2 years for lineman recruit to be a regular starter, barring an injury or glaring need (or elite, generational talent like Saquon). Ryan Bates, as an example, joined the Lions in 2015. Though Bates’ injury can likely attribute to the losses to Ohio State and Michigan State due to lack of depth, the Lions’ strategy to fill the cupboard with quality lineman aligns well with what has been working well in college football. Franklin is building this team for long-term success; it is only a matter of time. The Nittany Lions are again poised for a NY6 bowl. Though they will lose some great talent this offseason, the strategic work on the recruiting trail will make the foundation of the team much stronger for title runs in the very near future.