Stats And Storylines: Penn State Moves Up the B1G Standings and National Rankings 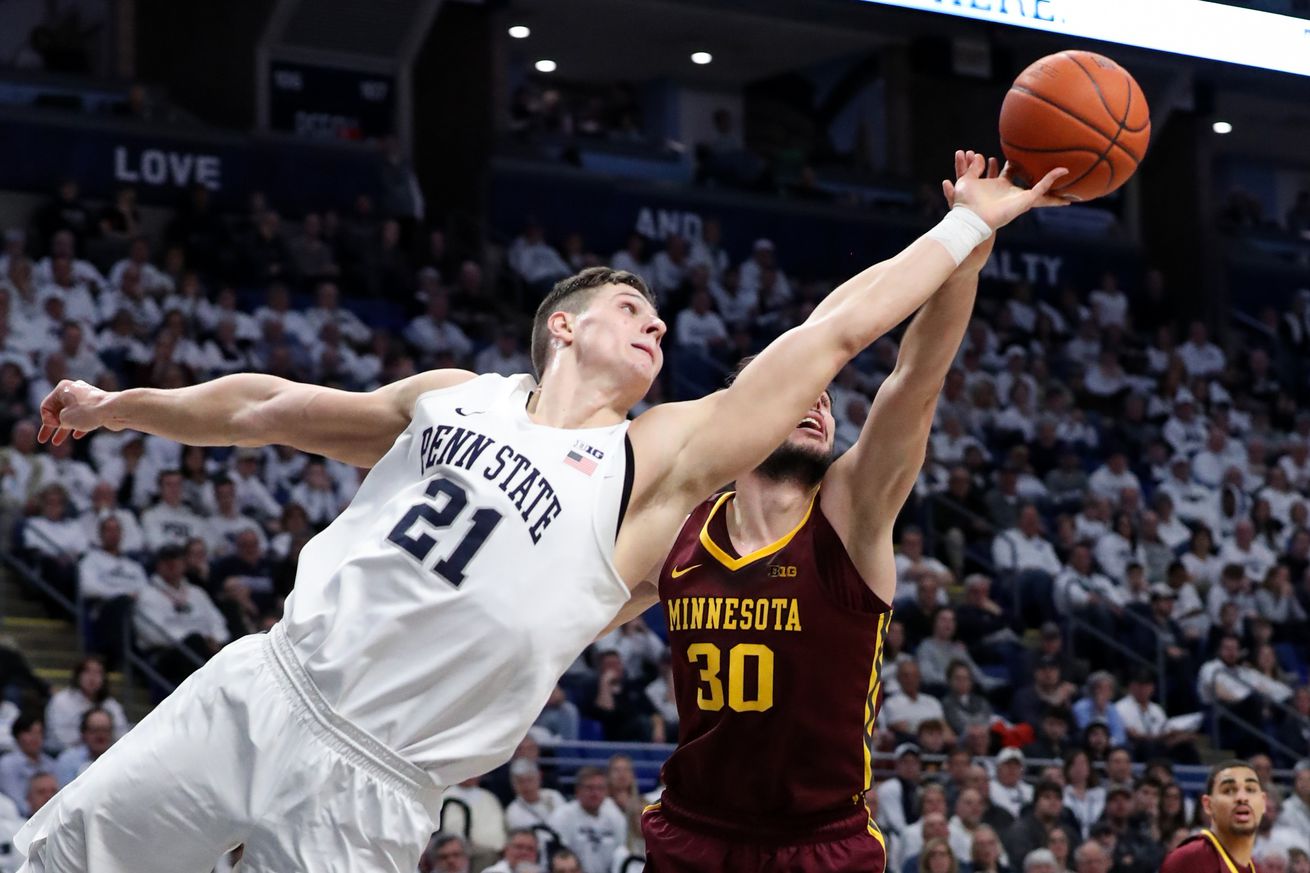 Anyone buying John Harrar’s stock after last week’s column did well. We are going to have to come up with a name for his supporters. Harrar’s Harassers? Nah, we can do better.

Penn State moved up to No. 19 in the NET Rankings with the win against Minnesota on Saturday and now sits in a share of second place in the best conference in the country. It was a sell-out crowd in the Bryce Jordan Center and the 15,000+ fans in the stadium got the entertainment that they anticipated.

It’s the second week of February and Penn State is getting national attention for their success on the basketball court. A season that began with some people doubting whether the team would make the NCAA Tournament now has those fans discussing the possible seeding that the Lions will get once they gain an invitation to the big dance.

It has been a great ride but one thing is for sure, it’s not worth stressing the small stuff when it comes to the current team. The Lions are in a position that is unfamiliar but the success is undeniable. Supporters should soak in the glory of each win, knowing this is possibly the best season they will ever experience as a Penn State basketball fan.

It will likely be the most successful season, by the time all the games are played, that most fans have witnessed. There will be ups and downs along the way. The next game is on the road against a Purdue team that plays great at home. We’ll hope the Lions win the final 8 games of the regular season, but in reality, a .500 finish would be great. Anything more than 4 wins would be a new Big Ten record for the program.

It wasn’t too long ago that some fans had to be convinced that John Harrar was a solid basketball player for coach Pat Chambers. When Harrar arrived on campus two and a half years ago as a project that had more offers as a football player than basketball coming out of high school, there was good reason to believe he might not pan out.

Following his play late during his freshman season, people began to take note that Harrar could be used as a serviceable role player. The team had won the NIT Championship with him as their primary center, with Mike Watkins out with an injury. Last season Harrar started more games than Watkins and proved to be a solid backup Big Ten center.

His statistics are what throw people off. Harrar has not shown much of a scoring ability to this point, though his effectiveness has increased recently. He may never score enough to grab much attention, or get more than ten rebounds in a game, but he has made a major impact on several wins this season.

For every win that the team has had in which Mike Watkins was not at his best, which includes Saturday, John Harrar deserves the credit that the primary center for the team should get. He has been on the floor during the tough minutes when Watkins was in foul trouble or just not effective, for one of the best teams in Penn State history.

On Saturday he showed his abilities to a sold-out crowd and national television audience. Sure, his offensive production and rebounds doubled as did his minutes played, but the little things that he does were there for everyone to see. It was impossible to ignore the impact that he was having on two of the best players in the Big Ten.

Marcus Carr is among the national leaders in assists and we saw what he can do when he gets going on Saturday. He can become a force that is impossible to stop. Jamari Wheeler did a good job on him for most of the night, but it was help from Harrar and others that made it possible.

Watch as Harrar waits for Carr to come across the screen and then sticks with him, moving his feet like a guard alongside one of the best guards in the conference. He’s a center, and has a huge body, but he is able to stay clean and avoid being put in a position that favors Carr. Wheeler came back and provided a double-team that got the ball out of Carr’s hands.

Then Harrar went back down into the lane, he was after all covering one of the best centers in the country while he was doubling Carr. Harrar put his big body between Daniel Oturu and the rebound as it was in the air, boxing him out well enough to keep him off the boards.

Technically Harrar didn’t do much than provide a ladder for Oturu to climb up with his left arm but he got in the way. Keeping his big body in the right location is also a subtle skill that Harrar has mastered that sometimes is not appreciated.

It was the type of defense that Harrar provided all game, while also doing some of the things that show up in the box score.

While we’re singing Harrar’s praises, notice freshman Seth Lundy . He was initially on the ball handler then he settled into the lane to provide backup on Oturu while Harrar was away. Once Harrar returned, he went out to get a hand in the face of a 3-point shot, then chased the shooter to the rim and blocked the shot, then got the rebound.

If that is what we can expect from Lundy, he will be able to provide some of the skills needed to replace Lamar Stevens next year, both on offense and defense.

Here is a look at a play with Harrar doubling with Wheeler. This time it paid off with a steal, which Harrar quickly used to start a break to Izaiah Brockington . That’s Daniel Oturu in the poster shot watching Brockington soar in for the dunk.

A Look At The Numbers