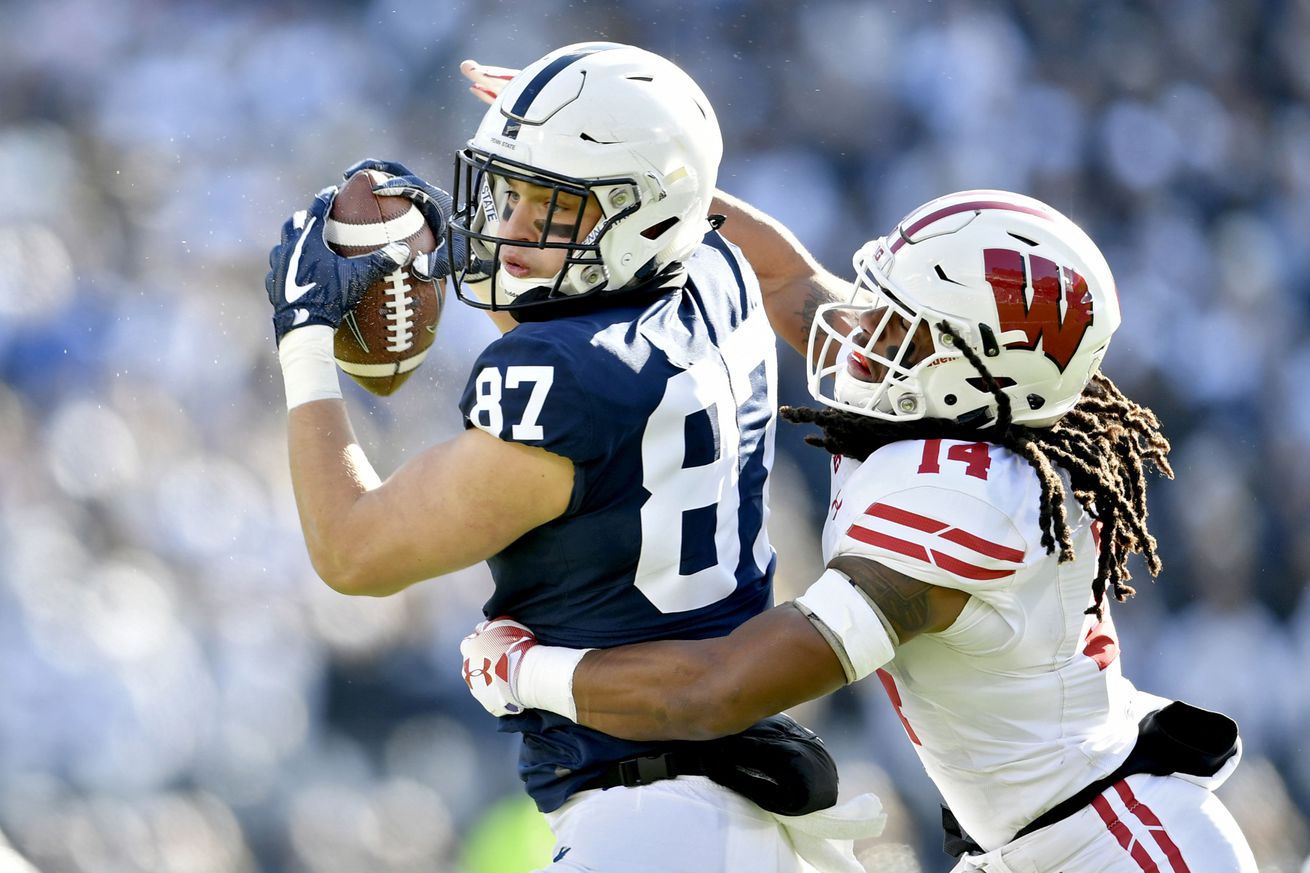 How do the two teams compare?

In the last few weeks, we’ve seen how Penn State stacked up against Ohio State and then Michigan on a position-by-position basis. This week, rather than look at a straight comparison by positions, we’re going to do each position against the opponent’s counterpart – that is, defensive line vs offensive line, secondary vs receivers, etc. This week’s opponent wouldn’t be seen unless both teams make the B1G Conference Championship Game, but the Badgers are undoubtedly a top 4 team in the conference, so let’s take a look!

Funny enough, there really isn’t a good comparison for QBs. They don’t really have a defensive counterpart, so we’re just going to do this the old-fashioned way!

On the basis of overall production, I’m going with Clifford. He had more combined yards, and more combined TDs. This could be a fun competition to watch, however.

When the Lions have the ball, they’ll bring in one of the most experienced offensive lines in college football. Wisconsin’s defensive line isn’t bad by any means, but since they play a 3-4 defense, they’re very reliant on help from their OLBs. In a pure man-on-man basis, the Lions get the nod up front.

When Wisconsin has the ball, they’ll bring a solid group, comprised of one redshirt senior and four redshirt juniors. The offensive line has a good amount of experience, but are more of a mixed bag when it comes to talent. Two of the players – left tackle and center – are former 4-stars, two – right guard and right tackle – are former 3-stars, and the left guard is a former 2-star. Compared with the Penn State defensive line, which has no player lower than a 3-star rating, and I’m tempted to give the edge to PSU. However, Jayson Oweh is just a redshirt sophomore, the youngest player between the two lines, so we’ll say that neutralizes his natural skill advantage. Wisconsin and PSU are even on this side of the ball, meaning the Lions’ win when they have the ball gives them the overall advantage in the trenches.

When Penn State has the ball, I like their chances. They literally have one of the best RB rooms in the country, with Journey Brown , Noah Cain , Devyn Ford , and Caziah Holmes all being players that could start for D1 schools. They should be featured heavily in 2-back sets. The flipside is that same 3-4 defense Wisconsin uses. There are four stand-up players for the Badgers that could make things tough. The reason I give PSU the advantage when the Lions have the ball comes down to the inexperience up the middle for Wisconsin – their two ILBs include a true junior and a true sophomore. The Lions have the edge when they have the ball.

When Wisconsin has the ball, for the first time in seemingly forever, they won’t have an All-Everything running back. Jonathan Taylor is off to the NFL, and their current stable of backs doesn’t have anyone that seems overly daunting. Given the absurd talent that PSU has at LB – namely Micah Parsons , Brandon Smith , Lance Dixon , Ellis Brooks , and Jesse Luketa – and Penn State easily wins this side of the ball. Strong advantage to PSU in this matchup.

I think we all knew this one was coming. Penn State has Pat Freiermuth and Jahan Dotson , and then a whole bunch of unknowns. Could the receivers be all right? One can hope, but right now they face one of the top defenses in the country. All four of Wisconsin’s DBs are at least redshirt juniors, but if there is a glimmer of hope, it’s that all four were only 3-star players. Perhaps some of the former 4-stars PSU has can attempt to out-athlete this secondary, but I won’t hold my breath. Wisconsin has the edge on this side of the ball.

On the other side, when Wisconsin has the ball, I’m willing to call it a push. Wisconsin is not known for their passing game, but they have a couple decent receiving options between SR Danny Davis, RS SR Kendric Pryor , and RS JR TE Jake Ferguson . The pass defense was easily the worst portion for the Lions in 2019, and they lost two starters in the back half. I’ll give the receivers the nod, and thus Wisconsin gets the overall category win.

When the Lions are special teaming it up, they’ll have Jordan Stout booming punts, kickoffs, and long field goals. Jake Pinegar went 11/12 for the Lions as well, which is pretty good. Unfortunately there aren’t very many proven return options, as KJ Hamler is off to the NFL.

Wisconsin has Conor Schlichting punting, and Collin Larsh kicking. Schlichting is entering his first year as starter, while Larsh had an okay year in 2019, going 12/18 overall. As far as kickers go, I’ll give the edge to PSU. The two returners the Badgers have – Jack Dunn and Stephan Bracey – are largely unknown. Dunn averaged 8.3 yards per punt return in 2019, while Bracey is entering his first year as kick returner. We’ll call the returners a wash, and give the overall category to Penn State.

Look, I really think James Franklin is a good game day coach. He’s not perfect, but he’s gotten better every year on game day itself. I like him to keep improving as well.

Paul Chryst is one of the better game day coaches in the country. Aside from the talent development – Wisconsin very regularly outperforms its average roster skill level – he knows what sort of team he wants to run, and sticks to it. His team will have a solid defense, and a good run game, and there’s nothing you can do about it. Granted, his team is in the B1G West, so their path to the conference championship game is easier than PSU’s, but he still gets them there more often than not. Just this past year, the Badgers were up 21-7 at the half of the Conference Championship Game over OSU before the Buckeyes stormed back for the win. Overall, I’ll give the game day coaching nod to Chryst.

Were these two to meet, I think you’d see Penn State win fairly decisively. When the Lions have the ball, I’d expect the PSU OL to take care of business up front, and for the PSU RBs to have the advantage as well, especially if 2-back sets are used. The PSU passing game might struggle, as Clifford is not as accurate as Coan, and the receivers need to prove their worth, but using Clifford as an extra rusher will cost Wisconsin.

On the flip side, while Coan is accurate, his OL will have their hands full with the PSU DL, and there don’t appear to be any All-Everything RBs to bail him out in the run game. The PSU LBs will live in the backfield, and if PSU can keep the lid on the couple decent receivers Wisconsin has, I foresee a tough day at the offense for the Badgers.

If the game does stay close, due to Paul Chryst’s game day skills, I still give the edge to PSU, as they appear to have the better specialists. On a neutral field – which this matchup would be for 2020 – I’d say the Lions win it 75% of the time.