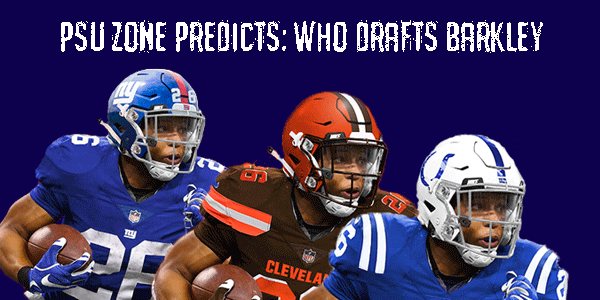 Cleveland is on the clock. We will soon find out how the 2018 NFL Draft pans out, and the thought on everyone’s mind is where Saquon Barkley will land. We already broke down why the Browns would be smart to pick Saquon #1 overall, and why they probably won’t choose him (even though they should). Now it is time for our own predictions on what will actually happen as to when and who will actually choose Saquon Barkley in the NFL Draft. Nothing serious at stake here, just PSU Zone bragging rights. No matter what happens, whatever team drafts Saquon will be the real winners.

Cleveland is Cleveland. Although they should draft him #1 overall, my prediction aligns more with Dan’s perspective, in that Cleveland is more Cleveland than we give them credit for.

One school of thought as to why they would draft Barkley first is that they traded for Tyrod Taylor. Taylor, while not elite, is serviceable and experience NFL quarterback certainly better than any of the three options they had last year. Plus, the QB model of drafting a guy to enter a system and back up a veteran is gaining popularity after Aaron Rodgers’ success following Brett Favre in Green Bay. Either Sam Darnold or Josh Allen (I think they take Allen) is a project, and will back up Taylor this and possibly next year.

The Jets are in dire need of a QB as well, but I don’t think Barkley lasts that long. The Giants, at #2, need a running back. They were 26th in team rushing, tied for 28th in rushing touchdowns, and 22nd in yards per attempt. They also need a future franchise QB, with Eli Manning fading fast with each passing year (no pun intended). But none, repeat NONE of the QB’s in this year’s draft are worth it. Eli is still better than most, and what he needs most is a game-breaking back to give opposing defenses pause when deciding how to play them.

Skeptics will say how the leading rusher in 2017 (Kareem Hunt) was a third-round pick. RB value has dropped, Reggie Bush (the last RB taken that high) didn’t live up to the hype, etc.

The problem with all of those arguments is that none of the comparisons were with a player like Saquon Barkley. His talent is so much better than others that it is often overlooked. He is the next Le’Veon Bell, possibly better. There are salary cap concerns, as the Giants have guaranteed money tied up in WR and safety as well. But my contention is: would you rather place your bet for top-2 level guaranteed money on Saquon Barkley, or Sam Darnold/Josh Allen?

The Giants will get it right. With the second pick in the 2018 draft, the New York Giants select Saquon Barkley, running back, Penn State University.

The Browns will not take Saquon #1 overall, mark that down. The New York Football Giants have the second overall pick. Many are predicting that this is where Saquon will actually go.

While they may feel the pressure to take the best man on the board, I do not believe that the Giants really want to draft running back. When NYG traded Jason Pierre-Paul, this was to make room for new defensive coordinator James Bettcher’s 3-4 scheme, and specifically to draft Bradley Chubb (who can play down end or linebacker). The Giants may also be looking for the future replacement for Eli Manning at QB. But I think the Giants will draft Chubb, the best defensive player in the draft, to start rebuilding the new defense.

This puts the other New York football team on the clock, the J-E-T-S. The Jets traded up to #3 for a better position in this year’s draft, but it wasn’t for Saquon. The Jets really need a franchise QB, and they are really worried that they won’t have their top choice at quarterback, or even their second choice. The Jets will take whatever they deem as the top QB still on the board.

So we are back to Cleveland with the #4 overall pick. We have discussed at length on how Cleveland is probably not smart enough to take the best player in the draft. So what is stopping them from passing on him twice? Well with the #1 and #4 overall picks, the Browns really should be shopping one of those picks, and I think that is what will happen at #4, the Browns will trade down. For Cleveland, assuming they go QB at #1 and Chubb goes to the Giants, they will be looking for an offensive lineman next. The top lineman, Quenton Nelson (who Todd McShay ranks as the #2 best player in the whole draft) will still be available at #7, and they will add more than just that with the trade.

Enter the Tampa Bay Buccaneers. They are the top team in the draft who has an absolute NEED at the running back position. Doug Martin is gone. The Bucs need a playmaker, and more than that, they need a marketable face of the franchise. Saquon fills these holes for Tampa all in one. Trading up from 7 to 4, probably won’t cost them too much (maybe an additional pick or expendable player). With Barkley next to Winston in the backfield as a serious run and pass threat, the Bucs will look to follow in the footsteps of the style of offense that Carolina fielded last year that led them to a postseason appearance.

This is a win-win for both Cleveland and Tampa. The Browns will get an additional player/pick via the trade (the more the merrier in Cleveland), as well as the O-lineman they want. The Bucs will get their man at #4 with what will be the absolute steal of the 2018 NFL Draft, Saquon Barkley.

I’m going to make my prediction short and sweet, these pictures were taken at a Pennsylvania barber shop and were posted on April 12th… Saquon knows where he’s going! (Courtesy: TMZ) 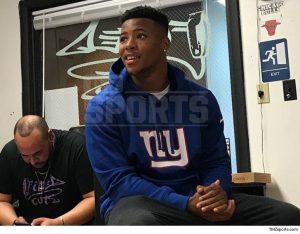 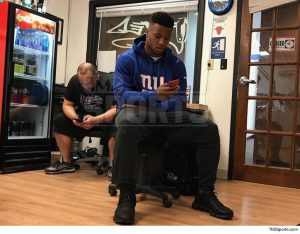