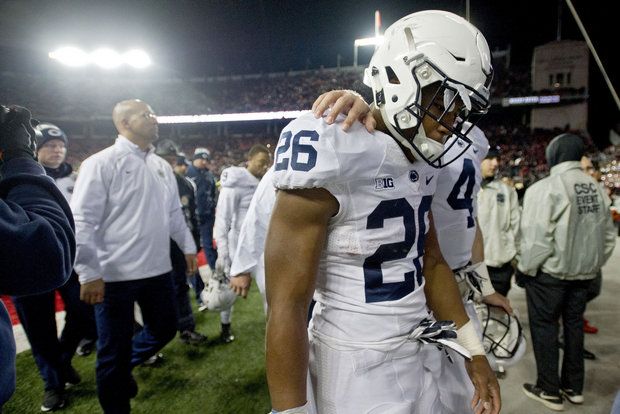 Consecutive loses to Ohio State and Michigan State have the Penn State fanbase deflated. Saquon Barkley’s Heisman hopes combined with a favorable November are hopeful points of emphasis that should be embraced

The result of the Ohio State game was not shocking, though the manner in which it ended may have been given the prior 58 minutes. A 1-point road loss to a top-10 team was able to be overcome, and there was still a great shot at the CFP given Ohio State’s schedule. The thought process up until the marathon game ended went something like:

“Ohio State has to go to Iowa (we know what happens there against good teams), and still play Michigan State, Michigan and likely Wisconsin if they survive the first three tests. Sure, Penn State still had to beat Michigan State, who always plays “touch defense” and can upset anyone. But talent wins, even if the Lions aren’t at their best MSU can’t score with Penn State. The committee would have to put Penn State in the CFP with 1 loss if Ohio State loses another game even if the Buckeyes win the conference, just like last year in reverse! Wouldn’t that be something!”

Problem was (with apologies to Ernest Lawrence Thayer):

Though somewhere Iowa was smashing Ohio State, and Lions fans about to shout;

There was no joy in Muddy Lansing – mighty Penn State had struck out.

More accurately they had struck low, a personal foul putting the Spartans in makeable field goal range to snatch defeat from the jaws of overtime. The harsh reality finally hit home as the Lions checked in at #14 in the CFP, down head-to-head tiebreakers to two divisional opponents and projected to go to the Holiday Bowl. The air has certainly left the balloon on a season that seemed destined for immortality on the wall of Beaver Stadium. With three very winnable games remaining, how does Coach Franklin inspire this team to maintain the same intensity it had when dreams of national titles danced in its head?

Like so many questions Penn State has had over the last three years, the answer lies in its All-World running back. Saquon Barkley has been exhibiting Heisman-caliber talent his entire Penn State career. He has a rare combination of vision, size, balance, speed and receiving ability that invoke comparisons to both Ki-Jana Carter and Le’Veon Bell. Barkley is unquestionably a once-in-a-generation talent that can take over games by himself. The fact that the Nittany Lions’ young and banged up offensive line was not able to match the conference’s two best defensive lines for four quarters cost Barkley valuable national visibility to his skills. The recent struggles have brought his great first half of the season back down to Earth, while Baker Mayfield put up video game-like numbers against its rival on national TV. 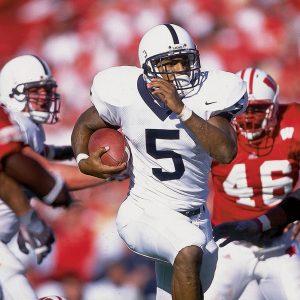 Despite three Penn State losses, star running back Larry Johnson was invited to the Heisman ceremony as a top-finalist in 2002

But if Barkley can put up big numbers against lousy defenses the last month of the season, it will tie back to his early-season success and may allow him to return to the front of the Heisman race. He is within striking distance of school records for career yards and touchdowns. Chewing up yards against sub-par defenses has been done before: Larry Johnson ran for nearly 800 yards his last three regular season games in 2002 to earn a trip to New York, though he finished third, largely due to Penn State’s three losses and Carson Palmer’s membership to the Old Boys Club.

Saquon Barkley has been a great ambassador for Penn State football throughout his tenure. He’s been a model teammate, had excellent work ethic and been one of the biggest reasons for Penn State’s rapid resurgence to national relevance. But more than that, he has shown that elite talent can flourish in Happy Valley again. If Barkley were to join 1973 winner John Cappelletti and win Penn State’s second Heisman trophy, the recruiting ramifications could be immense. You could easily make the argument that the impact of a Heisman trophy would appeal to a 5-star recruit more than a national title, as such a highly-regarded recruit would know that the program is able to support a player enough to win the top individual award in the sport.

As Penn State enters the last quarter of its season, its fans would be wise to let themselves admire and appreciate the last few games of a player the caliber of which they’ll likely not see for a long time. It’s time for the Nittany Lions to raise the curtain on Act II of Saquon Barkley’s Heisman campaign.