The Rose Bowl Game Presented by The Old Boys Club 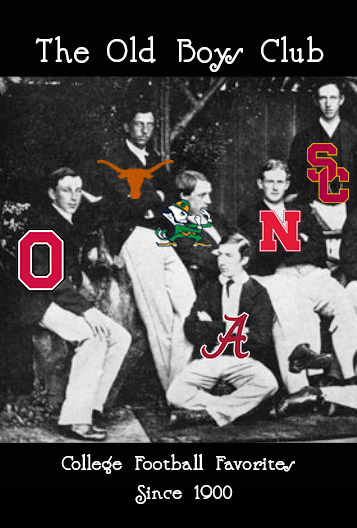 Penn State played its latest bowl game at the location of and against the opponent of their first bowl game in 1923: The 103rd Rose Bowl against USC. The “Granddaddy of them All” is the most historic and picturesque contest of the bowl season, which follows the Tournament of Roses Parade on what is always a perfect day in southern California. Long the ultimate objective of Big Ten and Pac 12 teams, there is no doubt both participants were thrilled at this reward for the seasons they had.

But unlike the 1922-23 season, there is an even bigger prize for college football teams this year:  the playoff national championship. Penn State’s narrow road loss to Pitt cost them a chance to play for the title in the playoff. Though the committee considers the teams’ performance, head-to-head results, whether they have won a conference championship and results against common opponents, the rankings are a composite of the subjective opinion of the committee members. As Penn State won a conference with 4 top-ten teams outright, landing at #5 surely stings. The primary reason Penn State was excluded, as it turned out, is that both UW and OSU had only 1 loss. This, according to the committee, superseded the head-to-head win the Nittany Lions handed the Buckeyes. Washington’s embarrassing non-conference schedule alone should have eliminated them from consideration. Does college football really want to encourage Washington-Portland State instead of Wisconsin-LSU?

Excluding Penn State from title consideration is nothing new, of course. No, college football’s national champion, despite many efforts to allude that it is determined on the field, has been and still is highly subjective. The members of the Old Boys Club, Ohio State, Texas, Notre Dame, Alabama, Nebraska and USC are the only serious perennial contenders for the national championship. These teams account for more than 40% of the titles won since 1900 (before any were vacated). And the bias against Penn State over the years is interwoven with each of its members and was in 2016 as well. 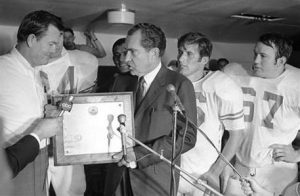 President Nixon presenting Texas with a plaque declaring them national champions after defeating Arkansas in a regular season match-up. Meanwhile, Penn State was in the midst of it’s historic 23-game win streak.

Joe Paterno’s third and fourth teams, in 1968 and 1969, were undefeated and won the Orange Bowl. The ’68 team finished second to (you guessed it) Ohio State, despite being the only other undefeated, untied team. The ’69 team was offered a trophy from President Richard Nixon for having the nation’s longest win streak, an impressive 23-game stretch. The problem was that Nixon offered the trophy to Paterno and Penn State as a consolation prize for unilaterally excluding them as national champion to repair the political damage done in Pennsylvania. Nixon had previously presented a plaque to Texas, after declaring the winner of the [regular season] Game of the Century between #1 Texas and #2 Arkansas to be the national champion. Paterno refused the longest-win trophy, infuriated over the disrespect to his team. He quipped at graduation in 1973 “I’d like to know, how could the President know so little about Watergate in 1973, and so much about college football in 1969?” He didn’t know much about either, apparently, as Arkansas would go on to lose the Sugar Bowl to Ole Miss. Perhaps the Rebels deserve a plaque as well. Ironically, the sentiment against Penn State in the 60’s was that their schedule was too soft, and as a result they didn’t deserve a shot at the title. This factor is apparently worth much less today, with the inclusion of Washington in the CFP. Sorry, Penn State.

The 1973 team finished undefeated and untied, this time boasting Heisman winner John Capelletti. A logjam at the top of the standings pushed undefeated, untied Penn State to finish 6th. Notre Dame beat Alabama (not Penn State) to win the title. Though it remains independent in football only, Notre Dame is annually praised for its difficult schedule despite refusing to join a conference (thus unable to win a conference title) and enjoys special rules from college football regarding the CFP. Sorry, Penn State. 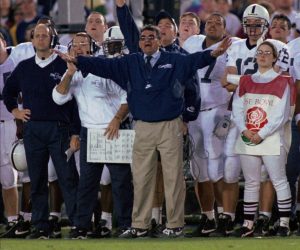 Despite having an impressive undefeated record and one of the most explosive offenses in college football history, the 1994 Nittany Lions were passed over for a shot at the national championship in favor of Nebraska and head coach Tom Osbourne.

The 1994 team with its prolific offense reached #1 after an epic game at Michigan, who was only ranked #5 thanks to a walk-off Hail Mary thrown by Colorado’s Kordell Stewart. Following a bye, PSU drubbed Ohio State 63-14 but fell to #2 in the AP when Nebraska beat #3 Colorado 24-7 the same day. Nebraska coach Tom Osborne had previously come close but never won a title, and it was widely thought that his team was elevated to #1 primarily due to that fact. Unfortunately, the Rose Bowl locked in the Big Ten winner and thus the title could not be settled on the field. Although Penn State dominated Oregon in the Rose Bowl, no team ranked #1 who won its bowl game had ever moved down. Sorry, Penn State. This was until 1997, of course, when Michigan won the Rose Bowl but was moved down in the Coaches poll in favor of Nebraska, likely because word of Osborne’s retirement “leaked out” before the bowl. Congrats, Nebraska, poor Osborne now has 3 titles!

The other participant in the 2017 Rose Bowl, USC, has been the beneficiary of the Old Boys’ Club as well. In 2003, the BCS, created to resolve the national champion on the field, rated USC #1 despite computer rankings placing them 5th-7th. But the AP failed to acknowledge the BCS champion and kept USC at #1. At least they were consistent with their final rankings in 1994 and 1997.

So it’s clear that if you’re in the Club, you’re given the benefit of the doubt. History shows it’s no surprise that Penn State was kept out of the CFP in favor of Ohio State. In the final CFP rankings, USC was placed one spot ahead of Colorado despite not playing in the conference title game and having one fewer win. As a result, they punched their ticket to Pasadena, a virtual home game in which USC has both played and won more than any other team. I wonder if the Club envisioned PSU putting on the show they did. 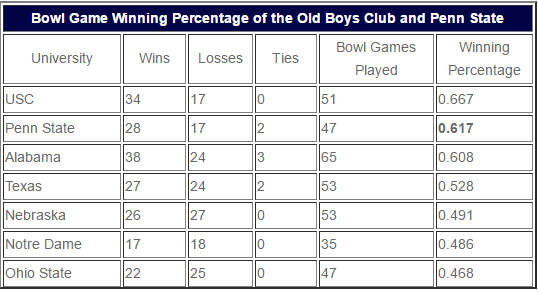 Interestingly (but not surprisingly), Joe Paterno proposed a playoff in 1978 in a Washington Post article. His idea was to take coaches and experts in the field to pick four teams, though selection would happen after the bowl games. That would be bad news for the Club since PSU has a better bowl winning percentage than all those teams but USC. Perhaps the Lions would have an even higher percentage if it played 2/3 of its bowl games 30 minutes from their campus.

After seeing the two awful games in this year’s playoff, followed by an epic Rose Bowl played by two teams who beat Ohio State and Washington, it would be intriguing for the FBS to determine a champion entirely on the field, as opposed to re-defining criteria to cater to the Old Boys Club.