Recap: Penn State caps off a 10-2 regular season with a 27-6 victory over Rutgers 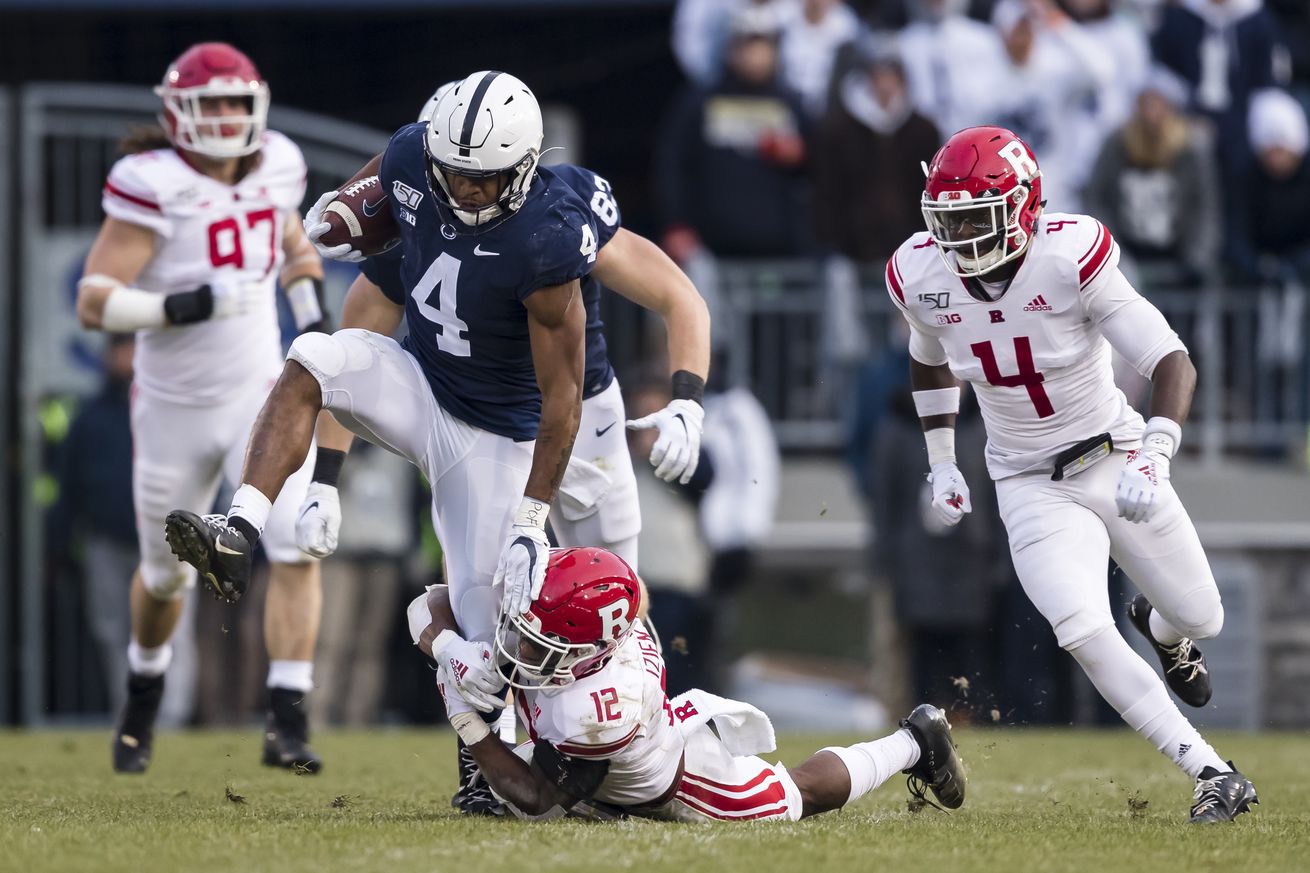 Everything might not have proceeded as we foresaw, but the Nittany Lions emerge with its 10th win of the year.

Penn State took the ball first after Rutgers won the coin toss, and drove the ball into the opponents’ territory. After a short run by Journey Brown , a pass to KJ Hamler went for 17 down the left sideline, and Brown avoided a huge loss by handing it off on a reverse counter play to Hamler , who managed to gain three yards. The Nittany Lions went for it on 4th down from the Rutgers 44, and Levis scooted around left end for a new set of downs. However, the Scarlet Knight defense stiffened, and Blake Gillikin was on to punt, pinning Rutgers at their own 11. The Penn State defense allowed a big pass play on the ensuing third and three, putting the ball at the Scarlet Knights 45, but Micah Parsons wrapped up quarterback Johnny Langan for a six-yard loss, and Langan ’s third down pass fell to the turf, resulting in a punt of their own.

Penn State started their second offensive possession from their 20, but went backwards and Gillikin was on to punt again. Rutgers took the ball at their own 37, and used a 39-yard trick pass play to move it into Penn State territory at their 15. However, a hands-to-the-face call on the offensive line stalled the drive, and the Scarlet Knights settled for a 29-yard field goal to take a 3-0 lead.

Levis and crew started from the 24 on their third drive, and Brown ripped off a 19-yard run up the middle on first down. Two plays later, Levis sprinted between right guard and right tackle for a gain of 30 to the Rutgers 21, and two plays after that, hurdled a defender for 14 yards down to the four. On third and goal from the two, Brown burrowed his way in, and Penn State took the 7-3 advantage with six seconds left in the opening quarter after the nine-play, 76 yard drive.

Rutgers started the second frame with a quick first down, and two plays after Daniel Joseph and Judge Culpepper wrapped up Langan in the backfield for a five yard loss, the redshirt freshman quarterback hit Isaiah Washington for a 22-yard gain. However, the Nittany Lion pass rush eventually got to Langan and forced an incompletion to Bo Melton on third down, and Melton committed an unsportsmanlike conduct penalty, leading to a punt returned by Hamler to the 30. Unfortunately for the Nittany Lions, the Rutgers defense forced a quick three-and-out. Fortunately, Penn State had Blake “Kill the ball” Gillikin, who drilled a 72-yard punt, pinning Rutgers back to their own three.

The Scarlet Knights ran the ball out to the 28 in just two plays, but managed one yard in their next three downs, keyed by a four yard tackle for loss by Shane Simmons and Garrett Taylor. Hamler called a fair catch at the 30, and Penn State appeared to be on a solid drive following some solid runs. However, Levis threw a deep jump ball to Daniel George , and Tre Avery picked it off for the visitors at the one. Rutgers moved the ball into Penn State territory, but their 35-yard field goal was wide right, giving the Nittany Lions the 7-3 lead, despite a sluggish effort.

Rutgers started the second half from their 25, and the Penn State defense forced a quick three-and-out. The offense started from their 26, and Levis took it for 49 yards down the right sideline, breaking several tackles along the way. Two plays later, Brown was in for a 18-yard score off of left tackle and Penn State led 13-3 with 12:05 left after a blocked extra point.

Rutgers picked up one first down before being stopped around midfield, and the Nittany Lions had a chance to expand further on their advantage starting from their 17. Levis picked up a first down on an option read up the middle, and fired another to Daniel George to the 41. Unfortunately, he missed a deep shot to Hamler, and was sacked on the next play to force another punt. The Scarlet Knights were set to go three-and-out, but Cam Brown ’s roughing the passer penalty momentarily extended the drive on third down. Rutgers used the penalty to move into Penn State territory, including a fourth down conversion to the 29. The Scarlet Knights went to the fourth quarter with a fourth down and two from the Penn State 21, and hit the 38-yard kick to make it a one-score game with 14:55 left.

Hamler brought the kick out to the 39, but despite three Ricky Slade runs (one negated by holding, and another for 14 yards to the Rutgers 41), the offense appeared to stall again thanks to a seven-yard loss on a sack of Levis. However, the redshirt freshman scooped up the snap and fired deep to Jahan Dotson , who evaded his pursuers en route to the right corner of the end zone for the 44-yard score, making it 20-6 with 12:16 left. The Scarlet Knights tried to get tricky again on the next drive, but Cam Brown shut down the flea-flicker and brought down Mangan for the sack, eventually leading to a failed fourth down conversion.

Journey Brown had a hard-fought run to the two on the ensuing drive, and two plays, he punched it in for his third score, giving the Nittany Lions the 27-6 lead with 5:13 left. After the play, Rutgers incurred an unsportsmanlike penalty, and Jake Pinegar ’s squib kick took a high bounce, deflecting off of a Rutgers player and into the arms of Noah Cain at the six-yard line. Unfortunately, new quarterback Taquan Roberson couldn’t lead the short touchdown drive, and Rutgers took over on downs. The Knights were held in check by the Nittany Lion backups, making the final score 27-6 good guys.

Will Levis finished 8 of 14 for 81 yards, a touchdown and an interception, and also led the Nittany Lions with 17 carries for 108 yards. Journey Brown added 16 carries for 103 yards and three touchdowns. Defensively, Micah Parsons continued his stellar year with 10 tackles and a sack, and Cam Brown had 1.5 sacks in his final game at Beaver Stadium.

Penn State improves to 10-2, and now awaits their bowl fate to be determined on December 8th.