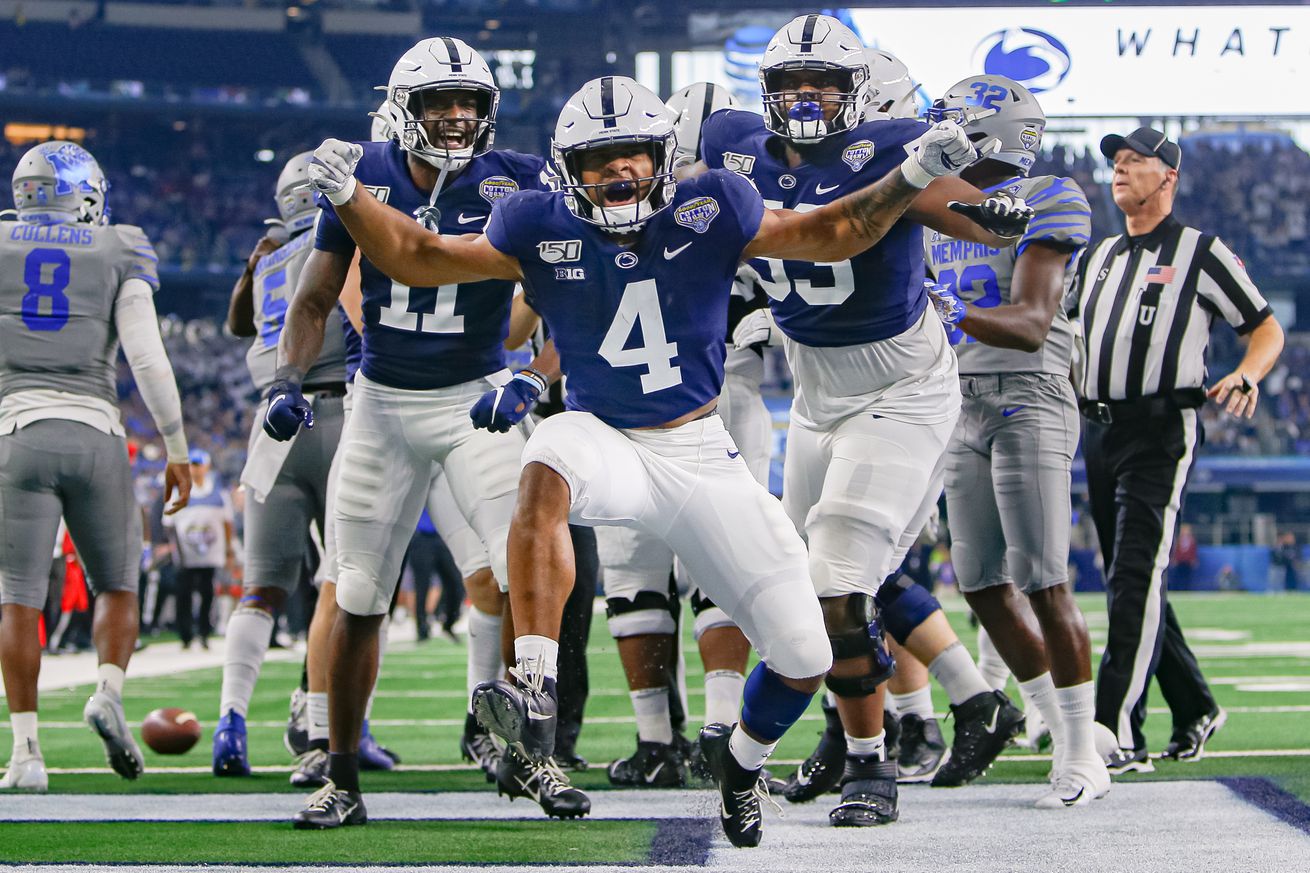 Join us on our journey to find the Penn State offense’s top position group.

Which position group will be the cream of the crop for the Penn State offense in 2020? Let’s take a look at each unit and where they stand heading into the fall:

The running back position remains the crown jewel of the Penn State offense, and somehow seems to keep getting better year after year. The 2020 group is led by Journey Brown , a speedster who has broadened his skillset and is ranked as the fourth-best running back in the nation by 247 . There’s not much dropoff behind him either. Noah Cain proved to be a powerhouse in just his true freshman season, and is the type of back who can consistently pick up chunks of yardage and keep the chains moving. Devyn Ford also returns for sophomore season after showing promise as a true freshman, earning a 5.7 yard per carry average with three scores. Ford has immense potential as an all-purpose back and should carve out a larger role in the offense in 2020. The Nittany Lions have also added two four-star running backs with the 2020 class, with Caziah Holmes receiving early buzz for his playmaking ability that could see new offensive coordinator Kirk Ciarraocca find some fun wrinkles to get him on the field.

This group is bolstered by Pat Freiermuth , who could very well be on his way to the John Mackey award as the nation’s best tight end. Freiermuth has been a difference-maker since the start of his true freshman season. He is the total package, combining fantastic blocking skills with his ability to score in the red zone, and be a threat anywhere on the field. There isn’t much experience behind Freiermuth, but there’s plenty of promise. Zack Kuntz is looking to emerge in his redshirt sophomore season, and should be used to create mismatches with his 6-7, 254 lb. frame. Four-star prospect Brenton Strange also will look to join the mix in his first year of eligibility and appearing in two games and scoring a touchdown against Idaho in 2019.

It feels strange to say this, but the offensive line group feels low. However, that is to the credit of the immense talent at running back and tight end. From end to end, the offensive line is packed with experience and talent. Tackles Rasheed Walker and Will Fries , center Michal Menet and guard C.J. Thorpe all return to their starting roles in 2020. Mike Miranda will take over the left guard spot, but has seen enough meaningful minutes the last two seasons that there is no real concern about his ability as a full-time starter. For the first time in a long, long time, the offensive line can actually point to results, not just potential. While there is still room for improvement, the offensive line took a major step forward and showed the ability to impose its will at crucial times in 2019. New offensive line coach Phil Trautwein produced standout offensive lines at Boston College, and could do some real wonders with the talent level now at his disposal.

Sean Clifford didn’t receive his proper due for his performance in 2019, but that is what happens when you follow a massively successful three-year starter who helped rewrite the record books before moving on to the NFL. Clifford performed extremely well for his first year under center, but did often run hot and cold within the same game. He can see a huge leap and become one of the nation’s top quarterbacks with more consistent play and better rapport with his overall receiving corps in 2020. Backup Will Levis provided a spark when Clifford went down against Ohio State, but showed he still has a ways to go to gain full command of the offense in his lone start against Rutgers. Ta’Quan Roberson and Michael Johnson Jr. both enter their redshirt freshman seasons, but it’s far too early to access how either four-star prospect will pan out at the next level without any quality reps yet.

Here’s the lone worrisome spot of the offense. Jahan Dotson is the only proven talent with KJ Hamler now a member of the Denver Broncos. Outside of Dotson is lots of uncertainty. Redshirt Daniel George saw plenty of time last season, but never developed a strong rapport with Clifford and finished with nine catches for 100 yards on the season. Cam Sullivan-Brown has proved a reliable target when given the chance, but injuries have limited him to just six games during the past two seasons. TJ Jones , a three-star prospect out of Florida, was penciled in as a starter along with Dotson and George on the spring depth chart, but he is entering his redshirt freshman season and has yet to record his first reception in a Penn State uniform. There is potential in the room, but many more questions than answers at this point. It will be absolutely vital for several of these young receivers to develop into reliable targets this fall for the overall productivity of the offense.