Penn State and Michigan State have played 31 times, and the series is tied. The 1948 game in State College ended 14-14, which mandates that a 32nd installment of the rivalry is needed to break the tie. The Spartans enjoyed early success against the Nittany Lions, winning 8 of the first 9 decisions through 1966.

After a 27-year hiatus, the teams met again at the end of Penn State’s first football season in the Big Ten in 1993. Most fans of the schools are aware that they have played nearly every year since then, with the victor earning the esteemed Land Grant Trophy. The trophy is named in honor of the schools’ status as the first two land grant institutions in the U.S. “Land-grant” refers to universities established on land granted to states by the Morrill Act, aimed at imparting expertise in agriculture, science and engineering in response to the blossoming industrial revolution.

Sorry, I blacked out there for a second, what was I saying?

Ah, the trophy. Even for a trophy as consensually hideous as the Land Grant, the participating teams should share a legitimate rivalry if only to justify its existence.

While many know the trophy, few know the origin of the rivalry itself. The Big Ten was thrilled to get Penn State as a member, but the historic success of the program presented a challenge. The conference already had a great rivalry in Michigan-Ohio State, so where would Penn State fit? 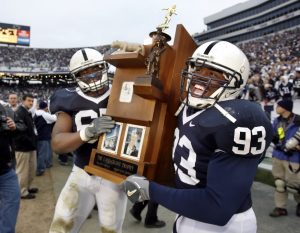 Enter George Perles, Michigan State’s coach from 1983-1994. Perles was also the defensive line coach, defensive coordinator then ultimately associate head coach of the Pittsburgh Steelers’ Super Bowl Championship teams in the 1970s, on which former Nittany Lions Franco Harris and Jack Ham played. With no obvious geographic connection and no recent historical games between the schools, Perles called his friend Joe Paterno to propose playing the Penn State-Michigan State game each year in the final conference game. Who knows, maybe he liked what he saw from Penn State-coached players.

In an interview with Pennlive in 2014 about the rivalry, Perles said his thought was that “We wanted to make sure we had a good game the last week of the season so [people would] stick around and see some college football instead of going deer hunting.” Perles designed the titanic trophy, and the rest is history. While the rivalry did not have immediate appeal to fans, there have been some terrific games over the years:

1993: Kerry Collins, Ki-Jana Carter and company come back from a 20-point second-half deficit to beat the Spartans 38-37 (Carter would blow up for 5 TDs the following year).

1995: Wally Richardson led the Nittany Lions on a game-winning drive with no timeouts to win the game with a touchdown pass to Bobby Engram. It was one of the best games no one remembers.

1997: Michigan State running backs Sedrick Irvin and Marc Renaud both ran for over 200 yards to knock Curtis Enis and Penn State out of major bowl consideration.

2004: In a very forgettable year, Zack Mills goes out a winner after leading the Nittany Lions to a 37-13 blasting of Michigan State, catapulting Penn State toward return to the top 5 in 2005.

2016: Penn State gets revenge for Michigan State’s recent success with a 45-12 victory that propelled into the Rose Bowl.

With so many great games and moments over the years, the battle for the Land Grant Trophy has turned into at least a memorable rivalry, if not a heated one. And on the eve of deer hunting season, Penn State and Michigan State fans alike have George Perles to thank for the great college football action to which we’ve become accustomed over the years.