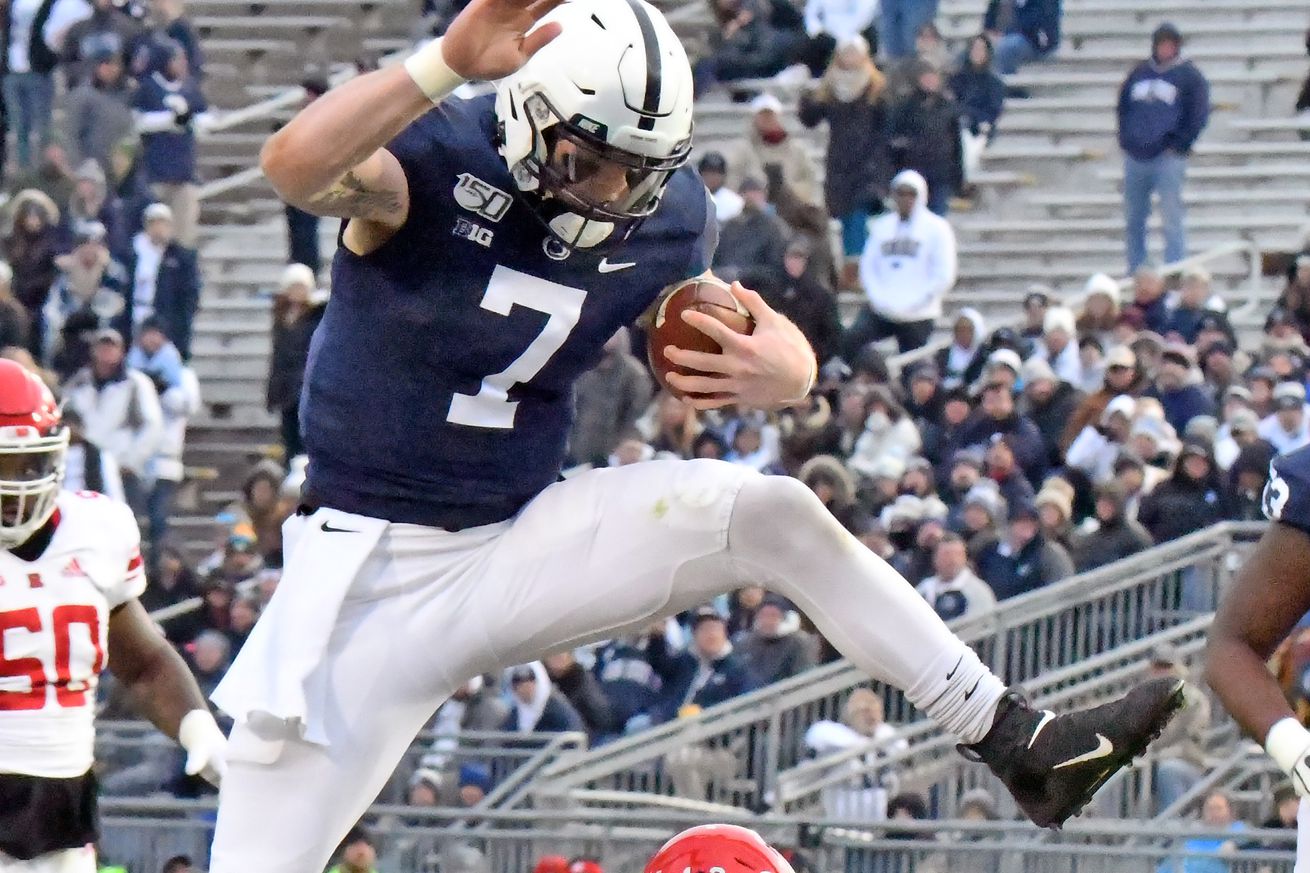 How did we grade a contest that was ugly at times, but still a decisive win?

Much like the team playing against Rutgers yesterday, it was quite hard to feign interest in doing this post giving out position grades against Rutgers. But, here goes something…

Will Levis’ first career start was a mixed bag, to put it kindly. He ran the ball 17 times for 139 yards, when you take out the sacks (which quite frankly, should not be counted against a QB’s rushing total), ripping off a few huge gains in the process. His passing left a lot to be desired, however, completing only eight of his 14 attempts for a touchdown and an interception. He was also sacked four times, which while not entirely his fault, it was clear why Sean Clifford has been the starter, because Cliff would have taken off and ran after sensing the pressure, while Levis stood in the pocket as a sitting duck.

That being said, Levis did also provide the game’s best highlight: With PSU clinging to a 13-6 lead early in the fourth quarter and facing 3rd and 15 just inside Rutgers territory, Levis scrambled away from pressure and tossed up bomb to Jahan Dotson, who caught it inside the 10-yard line, pushed the spin button a couple of times, and ran it into the end zone, to effectively ice the game for PSU.

James Franklin and his staff committed to the run from the get-go, running the ball 46 times, as opposed to only 15 passes. Along with Levis, Journey Brown also provided the bulk of the carries, going for 103 yards and a hat trick of TD’s on 16 carries. Ricky Slade and Devyn Ford also saw some action, with Slade averaging a smooth six yards per carry, including a 14-yarder.

In the few years that I have done the position grades posts, I have never given an ‘incomplete’ grade to a unit. However, given how few passing attempts there were yesterday, which meant few opportunities for the wideouts and tight ends to showcase their stuff, I had a hard time figuring out how to adjust the grading curve.

Shout-out to Jahan Dotson of course, for coming up with the biggest play of the game, quashing any upset hopes Rutgers had been harboring up until then.

Yes, they did a decent job with run blocking, but when you give up four sacks to a team that was dead last in the Big Ten in sacks per game, you get the grade you deserve. Thankfully, Rasheed Walker and Steven Gonzalez will have time between now and the bowl game to heal up from the injuries they suffered.

Yetur Gross-Matos sat this game out with an undisclosed injury, which gave Jayson Oweh the starting nod in one of the defensive end spots. Oweh had three tackles in a quiet afternoon for him, and the unit as a whole was rather underwhelming, at times, allowing Rutgers’ offensive to push them around on running plays and failing to get a consistent pass rush, with Daniel Joseph and Judge Culpepper combining to give this unit their lone sack of the game.

Like clockwork, Micah Parsons led the way in tackles for the defense with ten of them, including a sack, and was all over the field making plays. Cam Brown in his Beaver Stadium finale, recorded seven total tackles and a sack, himself. Once again, the linebackers led the way for the defense, and were instrumental in keeping Rutgers out of the end zone during a few drives where the Scarlet Knights were threatening to do so.

Johnny Langan had his second-best passing performance of the year, yardage-wise, throwing for 164 yards on 12-for-24 passing. It wasn’t a terrible performance by the secondary, and Garrett Taylor did force a fumble to go with his seven total tackles in his final game, but the unit once again felt like it underperformed to an extent. Story of the second half of the season.

Blake Gillikin was another senior who saved one of his best performances for his final game in Beaver Stadium, averaging a tremendous 49 yards on his four punts, which included a 72-yarder that pinned Rutgers at their own two-yard line. Jordan Stout booted all of his kickoffs into the end zone, and KJ Hamler had a 24-yard punt return, and also had a shot at breaking a couple of kickoff returns to the house, but ran out of real estate on the sideline. The blocked extra point for Jake Pinegar was the lone blemish for the special teams, so I can’t quite give this group a solid A, but it was hard to ask for more besides KJ taking a return all the way to the end zone.