It’s been couple weeks since the clock finally struck midnight on Penn State’s Cinderella season in the form of a walk-off field goal from USC. But the positive energy around the program continues to build, and since the first of the year the Lions have parlayed the strong showing into another verbal 2017 commitment, a top-10 ranking in the final standings and three starters confirming their return to Happy Valley for their senior seasons. Before finally closing the book on the 2016 season, I wanted to share the article I wish I got to write. With just over two minutes to play, Penn State converts the 3rd and 4, and runs out the clock to seal the win. 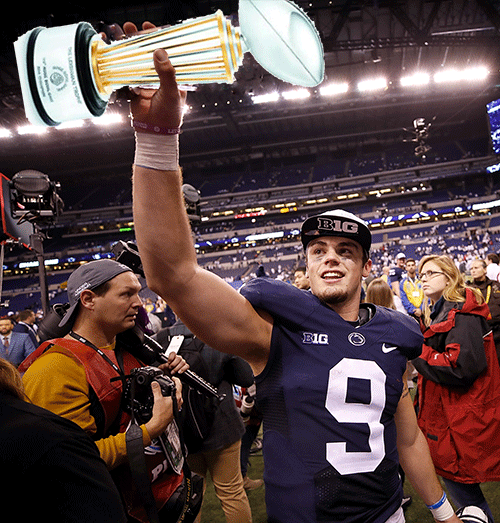 A rendering of Trace McSorley hoisting the Rose Bowl trophy

Last night, Penn State completed yet another double-digit comeback with an epic Rose Bowl victory over USC. Trace McSorley bested Sam Darnold in what turned into a shoot-out between 2017 Heisman hopefuls. Saquon Barkley had his Ki-Jana Carter Rose Bowl moment with a 79-yard lightning bolt on the first offensive play of a half, the signature play in the game. But as glorious as the last two minutes were, seeing James Franklin jubilantly embrace his girls and watching as the seniors punctuated their college careers with a Rose Bowl victory signaled that the moment was bigger than one game.

This game was the culmination of 4 years of adversity; a chance for the entire Nittany Lion community to celebrate together and to ring in a new year with its program restored to its former glory. Cynics (and Pitt fans) mistake Nittany Nation for football-crazed lunatics that care about nothing but winning. They question our morals, our priorities, even our university as a whole. But a closer look shows how much the character of the university, and those who comprise it, stands firm in the face of trial. Starting with Zordich and Mauti on the practice field in front of Lasch, to Ficken against Virginia and Wisconsin in overtime, to O’Brien, to Hackenberg, to Breneman at Wisconsin, Penn State persevered. From Franklin, to Ireland, to double OT against OSU, to Ficken against BC in Yankee Stadium, to 0-for-November, Penn State pushed onward. And from Michigan, to Minnesota in OT, to The Block, to the division, to the conference, Penn State proved its resolve was bigger than whatever it faced.

There were atrocities that occurred at Penn State. And while the specifics may not ever be fully known or understood, the university itself should and must be held accountable to prevent such things from ever occurring again. But while it is clear that the NCAA punishing a group of student-athletes that had no involvement in these horrific sins committed near one of its campuses was redundant, reversing the effects of that mistake proved harder than anyone imagined. Penn State gets to bask in the glory of a great game-comeback at the end of an historic program-comeback today, but those euphoric final two minutes don’t being to tell the story of the journey this team and university just completed. That’s the beauty of college football, as Coach Franklin stated after the game. It isn’t the NFL, and it’s not just about wins and losses. It’s about boys growing into men; it’s about demonstrating and celebrating character, integrity, and brotherhood. These were moments that could never be fabricated. These were young men, realizing what the university means to its community and its students. The win becomes secondary; it was the incredible journey of perseverance for which we as the Penn State community should be most proud.