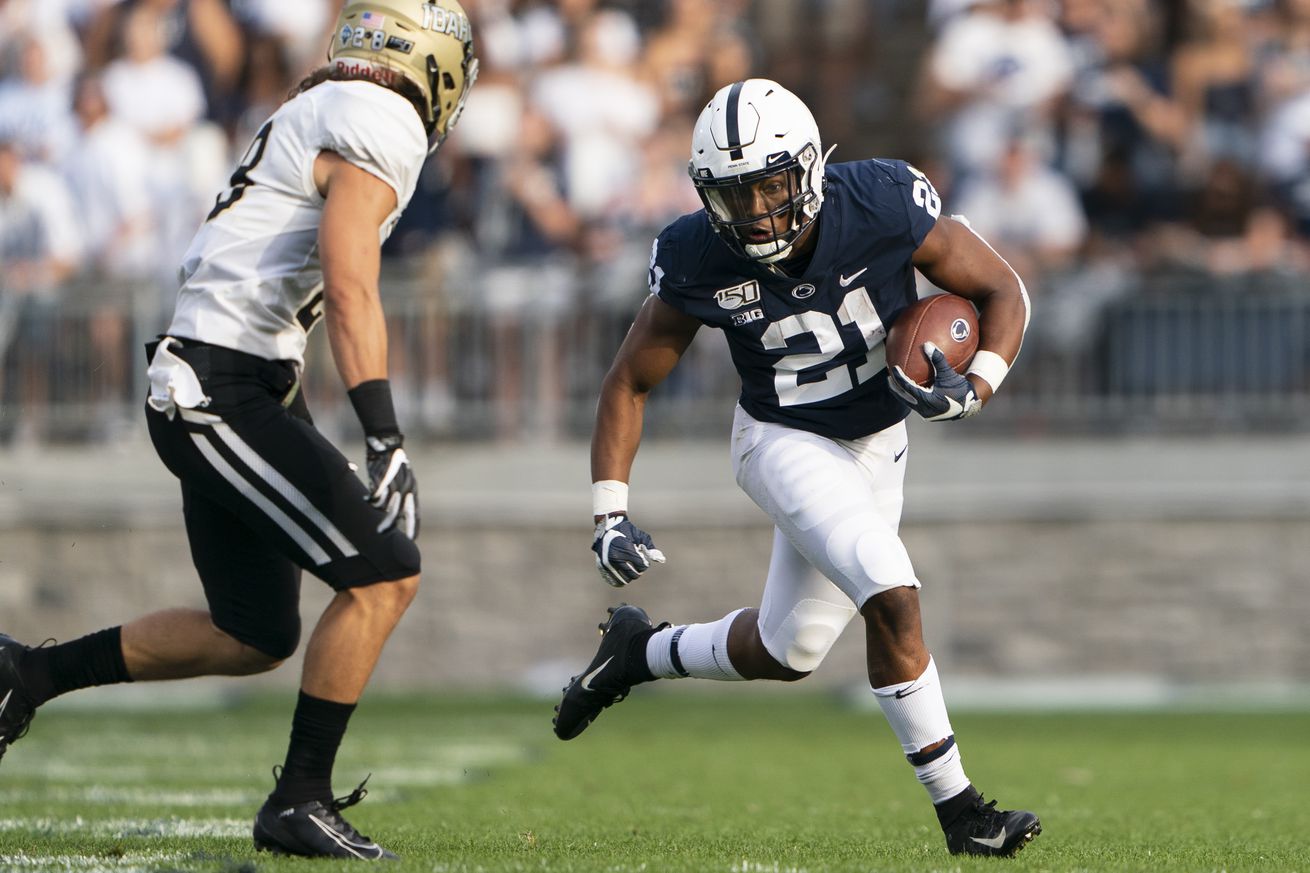 Cain is ready for more after making a splash as a true freshman.

It’s time for our annual season top 10! Each summer, the staff votes on its top 10 players ahead of the upcoming season. A first place vote is worth 10 points, second place is worth nine points, and so on.

How He Got Here

Noah Cain didn’t waste time any time turning heads as a true freshman. While Cain didn’t make the type of plays to get on SportCenter’s Top 10, he gave the Nittany Lions something that had been sorely lacking despite the program churning out elite running backs — the type of running back who can consistently keep the chains moving and churn out the clock.

Cain isn’t just a typical big-bodied power back. He has outstanding patience as he moves behind his blockers until the hole appears, then gets upfield and falls forward for additional yardage. He’s not the type who will get caught in the backfield and kill a drive with a 2nd or 3rd-and-long, or force an early punt when the Nittany Lions are sitting on a lead.

Cain proved so effective that the amount of his touches became a frequent storyline, even while the team was undefeated and climbing up the polls. Despite being part of a four-back rotation, Cain saw his carries increase which paid off with consecutive 100-plus yard games — going off for 105 yards against Purdue and 102 on a season-high 22 carries at Iowa). However, an injury would force him out of action against Minnesota, Indiana and Rutgers, and limit him to just one carry against Ohio State. He bounced back with a 92-yard, two touchdown effort int he Cotton Bowl victory against Memphis.

Cain will play a large part in Penn State’s offensive game plan for 2020, but the extent will be unknown until the season develops. This isn’t due to Cain’s ability, but rather being part of an extremely talented running back room with just one ball to go around. Journey Brown figures to be the primary ball carrier after an explosive ending to the 2019 that established him as one of the best running backs in the nation. Cain will be right by him, and will certainly see his carries increase when Penn State is trying to kill some clock, or just in a situation where they need help keeping the chains moving. Ricky Slade will no longer be part of the rotation after transferring to Old Dominion, although Cain’s classmate Devyn Ford will be back and expected to continue his role as well. Penn State also welcomes two highly-touted four star running backs in true freshmen Caziah Holmes and Keyvone Lee.

However this ultimately plays out, Cain will be building on a phenomenal true freshman season. While the offseason plans were thrown out the window, Cain should come back even more physically developed and add more strength to his already powerful running style. He showed incredible restraint as a runner for a true freshman — something that can be difficult as players need to learn to adjust to the speed of the game, and not just depend on athleticism to outrun everyone at the lower levels. There’s little doubt that Cain will continue to further develop his ability as a runner, and will be carrying the rock in crucial situations for the Nittany Lions throughout the 2020 season.