One of the best things about college football is its historic rivalries being played nearly every year for the better part of a century. Michigan-Ohio State, Texas-Oklahoma, Miami-Florida State, Alabama-Auburn and Florida-Tennessee are just some of the great games we have to look forward to each year. These types of games immediately remind us of past contests between its participants, and often have significant recruiting, bowl, or following-season momentum implications. Michigan and Ohio State take turns knocking each other out of national championship and major bowl participation. Cam Newton ran over Alabama en route to a national title in the middle of the Tide’s dominant decade. Peyton Manning could never beat Florida, but the year after he left Tennessee finally beat the Gators and won a national title. And you only need the phrase “wide right” to capture the mystique of the Miami-FSU game.

Making the Case for Playing Pitt – Keep the Fans Happy!

The games are loads of fun for the fans, the geographic area, and surely the players and coaches. Almost every national champion has a current historic rival. But Penn State, the new kid [back] on the block, is without one at the moment. Upon joining the Big Ten in football in 1993, there have been several attempts to create a rivalry for Penn State. Michigan State played Penn State every year in the final regular season game from 1993-2010, with Penn State holding a 13-5 edge in those games. With the advent of the Leaders and Legends division (and the addition of Nebraska to the Big Ten), Penn State and Nebraska were paired together from 2011-2013, with the Huskers taking all 3 games.

But without question, Penn State’s most logical and natural rival has been Pitt. The two most established football programs in their state, separated by 3 hours, played every year from 1935-1992 in a series dating back to 1893. At its competitive height, the rivalry was one of the most important games of the year in the northern/eastern region and usually capped off the teams’ regular seasons. However, once both teams had football conference affiliations in the rivalry was put on a 5-year hiatus. By the time the rivalry was renewed in 1997, it was played early in the year and just didn’t have the intensity of the previous games. Another long break came from 2001-2015, with the rivalry renewed in 2016 once again, thought again early in the season. After Pitt held on for an epic 42-39 win, many fans from both sides began pushing for the rivalry to be a permanent annual fixture in each other’s schedules. But from the standpoint of the athletic directors, would this really make sense for each program?

A Reoccurring Rivalry Makes Sense for Pitt, but Where is the Incentive for Penn State? 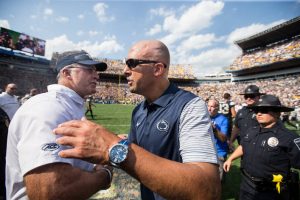 James Franklin and Pat Narduzzi will meet in Beaver Stadium this Saturday. The next time the Nittany Lions and Panthers will square off remains undetermined.

For incoming Pitt AD Heather Lyke, this seems like a no-brainer. After Penn State joined the Big Ten, Pitt began playing West Virginia in its season-ending game. Though not as good an option as Penn State, the Mountaineers served as a suitable rival for Pitt, both in geographic flexibility and competitiveness. But since moving to the ACC, Pitt has played Miami (FL) and Syracuse to end its year. Syracuse is a basketball rival but no longer relevant in football, and though Pitt may consider Miami a rival, it would not be considered one of Miami’s main opponents. That leaves Pitt with having to secure a non-conference rivalry with either Penn State or WVU to give its fans an exciting end-of-season matchup. With a stadium 75% larger than WVU’s, the in-state proximity and huge PSU alumni base residing near its campus, Pitt would very likely prefer to play Penn State to end the year, even before the Nittany Lions returned to national prominence. With the TV exposure and attention that come with being a top-10 team, playing Penn State in the last game of the year would provide Pitt the opportunity to definitively show recruits and bowl representatives alike that they are on par with Penn State. Additionally, they would enjoy a share of the gate from the bi-annual trip to Beaver Stadium, even if they fall short, which could bolster their other athletic teams and the university facilities. 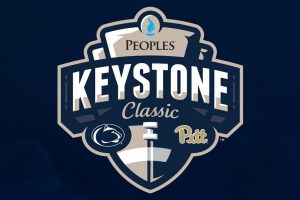 You know it’s a rivalry when the marketing folks assign a catchy name to the game and line-up a sponsor!

For Penn State’s Sandy Barbour, however, the decision is (at best) more difficult, and becomes an economic one. Penn State’s fans want a rivalry game to end the year, and would even welcome a non-conference matchup with a team like Pitt if it makes sense, similar to Florida-Florida State or Georgia-Georgia Tech. But already firmly [re]established as a national powerhouse, Penn State enjoys the luxury of being able to dictate its terms due to the revenue the football program generates. In 2011, Forbes reported that Penn State [then-recently] netted $50MM from football (another $4MM profit was realized from men’s basketball). In addition to coaches’ salaries, recruiting budgets and gameday expenses, that profit is used to fund 25 other men’s and women’s sports with neither additional fees to the students nor outside support from the university and state. In 2014, the program netted $36.2MM in profits in a year they went 7-6, and this was in a year that still had only 8 conference games. With the Big Ten moving to 9 conference games in 2016, even more pressure is put on the AD to protect for 7 home games, as the years now alternate between 4 and 5 away conference games. This upcoming year, for example, PSU plays 5 Big Ten away games, forcing all non-conference opponents to visit Beaver Stadium.

As I’ve mentioned before, of this schedule investigation concluded, it is advantageous for A-list programs to schedule A-list opponents to motivate the CFP committee to favor them for the playoff. But even if Pitt were willing to accommodate Penn State’s scheduling requirements (I wonder how long it would take Pitt fans to inundate social media with opinions of that request), should Penn State marry themselves to Pitt with an annual, multi-decade agreement? The answer should be evident from this season. Pitt had another mediocre year with several good players, no defense and some bad losses. They did have two epic wins, the second being the road win at Clemson. But the first, a wild game against Penn State, proved much costlier for the Lions than beneficial for the Panthers. Pitt parlayed the 2 good wins into a Pinstripe Bowl loss to Northwestern. Penn State’s loss to Pitt cost them a playoff berth and shot at a national championship. There is no upside to playing Pitt other than the natural rivalry, and Penn State would have to pay (or more accurately forfeit revenue from games in Pittsburgh) to do so, hampering its athletic department. Penn State is Pitt’s Super Bowl; Pitt would only be at best the 3rd most important game of Penn State’s season each year. They do not provide the boost of playing a non-conference powerhouse team such as LSU or Oklahoma, and a loss would normally prove catastrophic as it did in 2016. While it would be nostalgic and interesting to alumni of the two schools, before Pitt fans pound on a table and insist Penn State play them every year, they should probably fill their stadium and make sure they can beat North Carolina (in football) first.