It was November 1912, almost exactly 105 years ago, Penn State and Ohio State met for the very first time in Columbus, Ohio for a game that sometimes is not even counted in the history books (at least the OSU ones). The Ohio State fans laughed at the team from the small Pennsylvania farming town. The local media predicted a rout for the home team. However, these “farmers” got the last laugh. Penn State proceeded to show the Buckeyes, and their fans how they did things back east. Through hard-nosed football, led by their quarterback “Shorty” Miller, with about 9 minutes to go in the fourth quarter, PSU had a commanding 37-0 lead. Ohio State coach John Richards then complained to the refs that Penn State had been playing dirty all game, and proceeded to walk his team off the field and into the locker room. The refs told Penn State that they had to remain on the field for the time left on the clock to be able to claim the forfeit. In that time, OSU fans started storming the field, attempting to attack Penn State players, even burning Penn State decorations. The two teams did not play again for another 44 years. In the books, it went down as a 1-0 forfeit, but in any Nittany Lion fan’s book, it is a 37-0 drubbing to start off one of the greatest rivalries in college football. Bad blood was born. 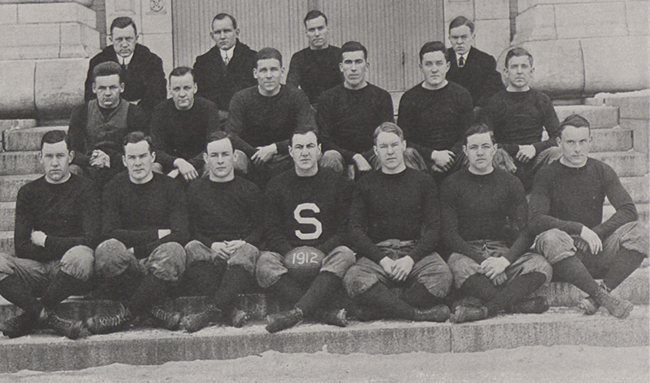 The 1912 Penn State Nittany Lions were the first to face Ohio State, ending in a Buckeye forfeit.

Fast forward oh, a century or so, and the rivalry remains. Through the classic games like the 1980 Fiesta Bowl, the horrible tragedies like the Adam Taliaferro injury, as well as the euphoric moments like the come-from-behind victory to give Joe Paterno his 324th victory to become the all-time winningest coach in NCAA history, we have seen it all in this matchup. Whether it is the close vicinity of Columbus to the many PSU fans coming from Western Pennsylvania, the tightly contested games over the years, or the literal blood that was spilled in that first game, Penn State-Ohio State is a heated matchup that always means something.

The main topics and stats you will hear from most sports outlets this week will focus on last year’s epic come from behind victory, or even that the Buckeyes have the edge 18-14 in the all-time series, or that Penn State has struggled in the Horseshoe in recent years, or that OSU has won twice as many of the matchups since Penn State joined the Big Ten. 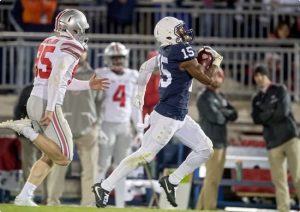 But this game means something different this time. Both teams are in the Top 10 in the country, with potential College Football Playoff hopes riding on this game. If anything, last year’s game is quite evident of that. But this is only the eighth meeting where both are in the Top 10 and the first since 2008. In all seven of those previous Top 10 matchups, the higher ranked team has won every single time. Good news for the #2 ranked Nittany Lions going into this weekend (despite the odds that Vegas is currently giving).

This Penn State team is also a very different squad than the ones that have come into Columbus in 2015 & 2013 (let’s just not mention the score of those games for now). The boys in blue and white this year are led by a prolific veteran defense, and the scoring prowess of both Trace McSorley and your leading Heisman candidate Saquon Barkley. 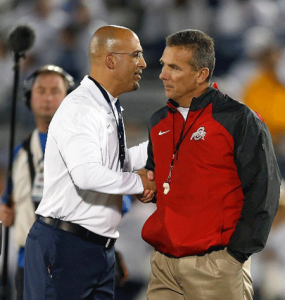 What has somewhat become the calling card of this team (much to the chagrin of our heart rates and fingernail lengths) is that they are a second-half team. We obviously recall the recent memory of the Iowa game with Juwan Johnson’s touchdown with no time remaining on the clock, as well as the epic punt-block-touchdown finish to last years Ohio State game. What you probably didn’t realize is that Penn State has outscored their opponents in the second half for the last 16 consecutive games, going all the way back to the midpoint of last season. This is a phenomenal statistic to think about, considering there were some blowouts in there, where the team continued to play ball in the second half, and not just sit on a lead. What is even more important about this statistic, and why it matters against Ohio State, is that 15 out of the last 17 meetings between the Lions and Buckeyes have been won by the team scoring the most points in the second half.

While I think we would all prefer Coach Franklin’s team to get out to a big lead and see it through to the end (certainly would be better for the blood pressure at least), the Lions will have to have a strong second half to beat their proverbial bad blood rivals. They are the higher ranked team, and on the national stage, need to prove to everyone why they are.

In a rivalry steeped in bad blood, over 100 years in the making, revenge will definitely be on the minds of the scarlet and grey (and I am sure the FOX broadcast will remind us of it plenty of times). But the Lions in Blue and White, the team from the little farm town in central Pennsylvania, need to walk into Columbus the same way they did the very first time, with a chip on their shoulder, proving their own point, and showing everyone how we play football back east.