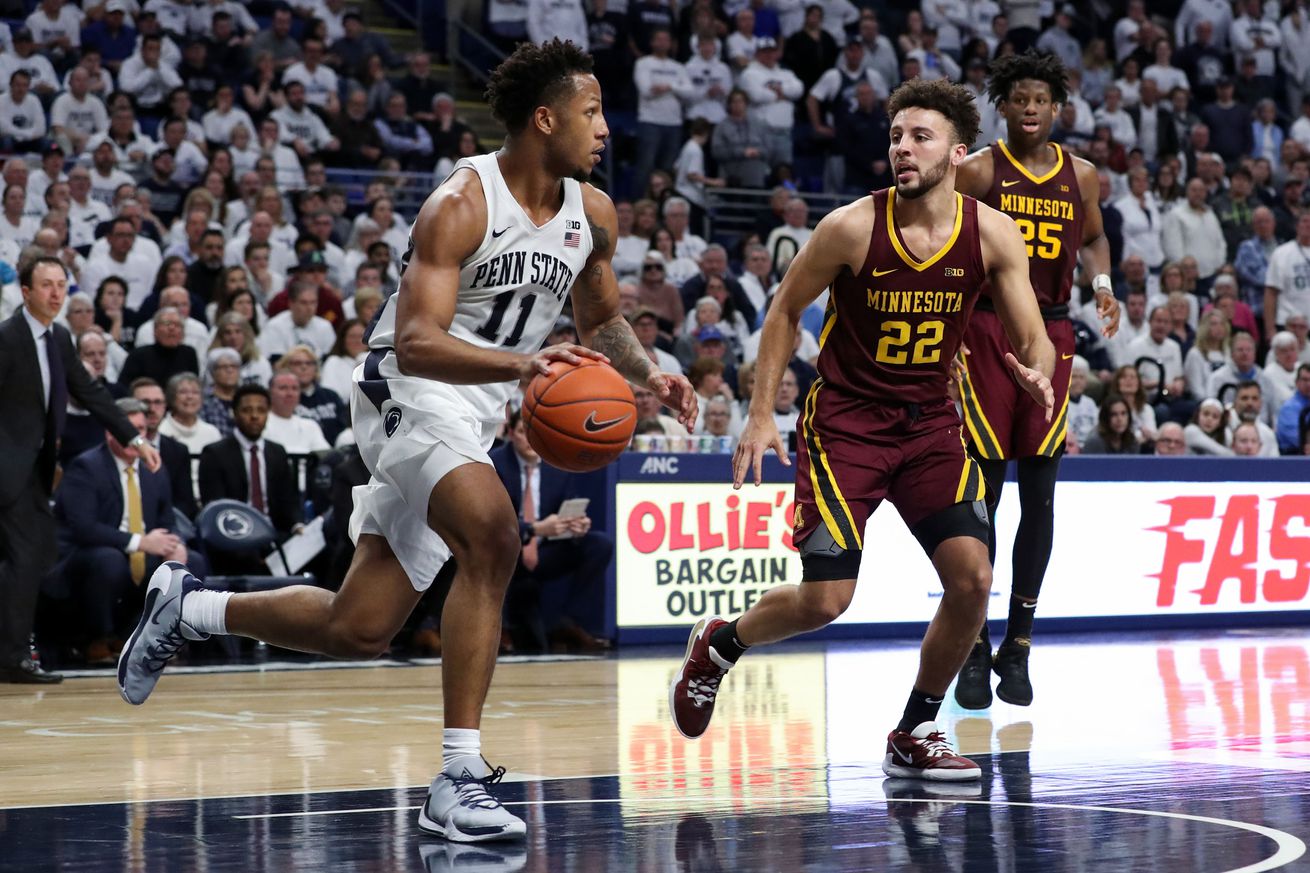 Given how well Penn State had been playing lately, especially being fresh off a huge upset win at Michigan State, one should have expected a higher-than-usual attendance for a Saturday afternoon home game rematch against Minnesota. What may not have been expected however, was the Bryce Jordan Center’s first sell-out since March 2011, which coincidentally, was also the last time PSU made the NCAA Tournament.

With a nearly full-to-the-rafters “White Out” crowd cheering them on, PSU jumped out to an 11-4 start, thanks to some quality free throw shooting from Lamar Stevens and Seth Lundy (who nailed all three of his FT’s after being fouled in the act of shooting a three-pointer). The Gophers however, would claw their way back with Daniel Oturu leading the charge (he scored eight of Minny’s first 10 points).

Right as it seemed Minny might take their first lead of the game, PSU responded with Lamar and Myles Dread nailing back-to-back threes to push the lead back to seven. From there on, PSU played some very solid defense to hold every Gopher player not named Daniel Oturu in check, holding Minnesota to just 30 percent shooting from the floor in the first half. Lamar meanwhile, continued to play like a man who hadn’t forgotten that testy post-game handshake moment with Oturu, racking up 17 points in the half, which allowed the Lions to take a 36-22 lead going into the locker room.

The second half saw PSU picking up where they left off, as the team used their aggressiveness to attack the rim and continue to keep Minny at bay, leading by as many as 19 at one point. With the Lions seemingly in control, the Gophers to their credit, never said “die” and would claw their way back, thanks to Marcus Carr and Gabe Kalscheur catching fire by picking up the scoring slack, and nailing several treys to spark the rally.

With six minutes to play, PSU was clinging to merely a three-point lead when Lamar Stevens completed an old-fashioned three-point play and Myles Dread, who was filling in a starting role for Myreon Jones , who missed the game with an illness, followed it up with a cold-blooded trey with Carr closely guarding him, to PSU back up by nine with 3:13 left.

PSU would utilize clutch free throw shooting down the stretch to deny the Gophers the rally and the sweep. When it was all said and done, Lamar had reached a new career single-game high of 33 points and PSU more importantly, kept their winning streak intact, now standing at six straight victories. That streak will certainly be tested once again in West Lafayette this Tuesday when the team faces Purdue, but for now, the climb continues in a positive direction.

Both teams ultimately shot the ball very well, Minnesota with 44 percent and PSU with 50 percent, hence the high PPP’s. The difference-maker here was PSU getting twice as many trips to the free throw line (26 to Minnesota’s 13). Granted, PSU did have their issues down the stretch making FT’s to help ice the game, finishing only 19-for-26 (73 percent), while Minnesota hit 11-fo-13 (85 percent).

Lamar asked what he and (Daniel) Oturu said to each other after hugging it out in the postgame handshake. Says they are both competitors and they sometimes let things get out of hand with their competitiveness. Sounds like they have both buried the hatchet.

Penn State (18-5, 8-4) travels to Purdue this Tuesday, in their only meeting with the Boilermakers this season. Tip-off will be at 6:30 PM ET on BTN.