Historically, Northwestern does not exactly frighten its opponents. In addition to wearing purple and white (no judgment), it plays in a “stadium” so small that you can hear the individual claps after a positive play (literally). To their credit, the Wildcats do have 3 Big Ten Conference titles in a 6 year span under Gary Barnett and Randy Walker. Furthermore, while it may not be the size of Beaver Stadium, Ryan Field is adorned with successful years in Wildcat football history. Not to be exclusive, however, the program doesn’t limit its recognition to national championships (there aren’t any) or even conference title-winning seasons (there aren’t many). No, Ryan Field displays the 13 years Northwestern has played in bowl games for all some to see. Before 2012, the only bowl win in Northwestern history came in 1948.

While Beaver Stadium (left) is known for being one of the loudest places to play, Northwestern’s Ryan Field gives the Wilcats an advantage for the exact opposite reason.

It is hard for Penn State fans to understand the struggle Northwestern has had throughout its football history, and the Nittany Lions have won 8 of 13 against the Wildcats all-time. Don’t feel too bad for NU, though. The university is annually ranked the best academic institution in the prestigious Big Ten with successful alumni across the globe. But as Penn State leaves the safe confines of Happy Valley, Northwestern does hold one advantage few visiting teams realize – until they find themselves down double digits before the students roll out of bed. The 11am local start in Evanston, in front of possibly the quietest Power 5 crowd in the country, lulls its opponents to sleep while the Wildcats pounce. Of Northwestern’s five wins against Penn State, only one was played at the second time slot (2:30 Central), and that came at the hands of the 1995 conference champions. The 2003 and 2015 games were played in Evanston, and the 2004 and 2014 games took place in State College; all were at 11am Central time. 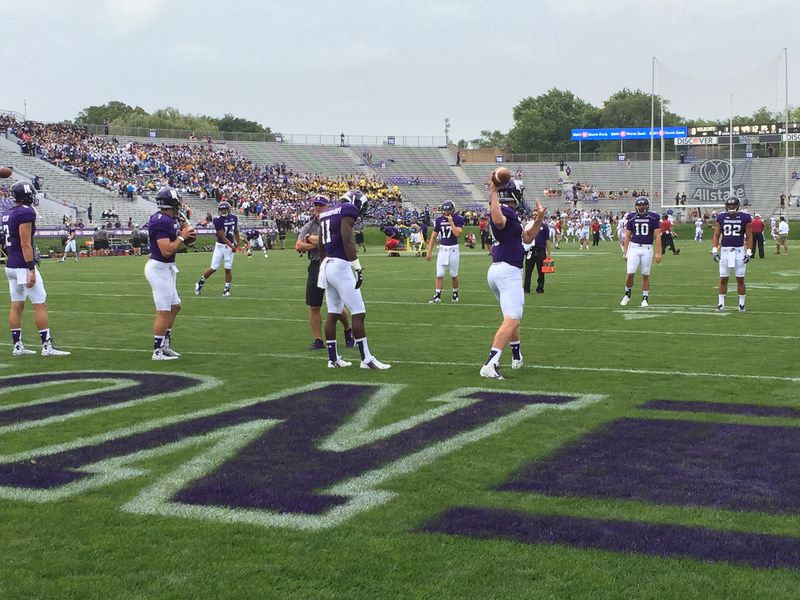 Northwestern warming up before a game against Stanford at Ryan Field in September 2015. Notice how empty the bleachers are.

While Penn State has won its share of early-kick games, Northwestern continues to schedule home games against good teams in the early time slot. Their 2015 home win over eventual #3-ranked Rose Bowl champion Stanford is a classic example of the early-game advantage, exacerbated by the fact that the Cardinal was still on Pacific time, a 9am effective start. Later that year, the Wildcats defeated Saquon Barkley, Chris Godwin and Penn State in an 11am game. NU jumped out to a 20-7 halftime lead against a sleepwalking Penn State offense before kicking a late field goal to win the game.

Northwestern again welcomes the Nittany Lions to Ryan Field Saturday morning, hoping to lull them to sleep and steal a huge upset. I’m sure Barkley and the coaching staff remember what a frustrating first half they experienced two years ago, and will be ready for the individual claps, whispers, and echoes of an open stadium with a practice field-like atmosphere. Penn State traveled to Iowa and beat the Hawkeyes at their own game, and now will likely have to do the same in Evanston.