The New Big 2: Has the Balance of Power Shifted in the Big Ten?

It was when Penn State joined the Big Ten in 1993 that I first heard the term “Big 2, Little 8”. “8” quickly became “9”, as Dick Honig and the Boys were quick to group the Nittany Lions in with the lower tier teams of the conference. It was always Michigan and Ohio State’s world, and the rest of the Big Ten was living in it. And to be fair, Michigan and Ohio State to date have won nearly half of all football Big Ten championships between them since the conference’s inception in 1896. Their most successful coaches’ names are on the Big Ten coach of the year award. 8 out of 13 Big Ten Heisman Trophy winners came from the two schools, and 23 (24 if you count a year they tied for it) out of 38 national championships, including all since 1968, came from either Ohio State or Michigan.

Since 2010, two other teams have pushed themselves into the inner circle, challenging the notion that the conference is two prize fighters among a bunch of sparring partners. Penn State and Wisconsin, last year’s participants in the Big Ten title game, make a strong case that the balance of power in Big Ten football is changing hands. Wisconsin has gone to the Rose Bowl three times in that span and won their respective division four out of a possible six times. They are running away with their division this year and are ranked in the top 5. Penn State has won two division titles and a conference title in the last 8 years. They currently boast the Heisman frontrunner and sit at #2 in both polls. The Nittany Lions and the Badgers are on pace to meet for a second conference title matchup in a row. 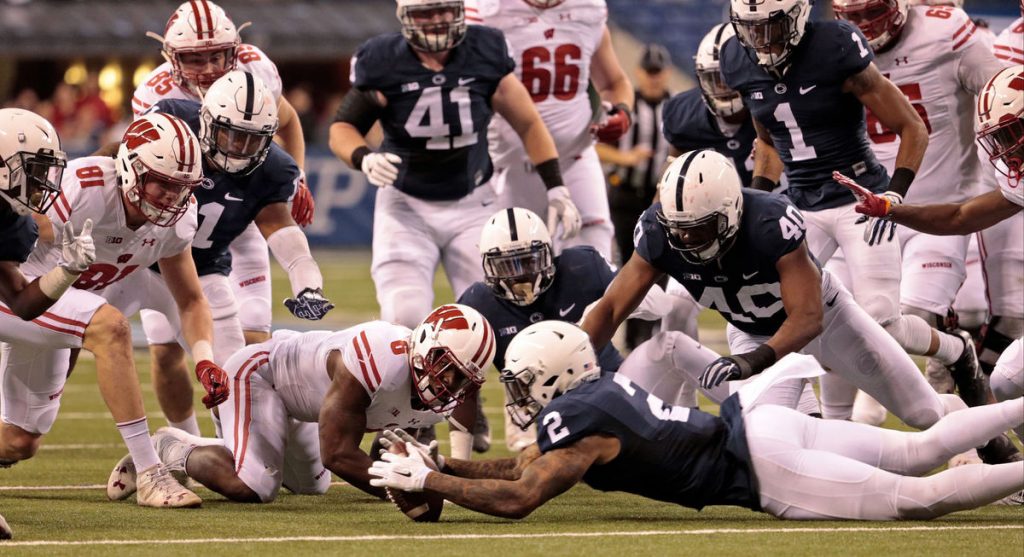 Conversely, Michigan has finished no higher than second in their division since 2010, with no real excuse for their gradual slide into mediocrity. They consistently have great recruiting, top-notch facilities and a universally-known program brand. Jim Harbaugh, to his credit, has brought them back to relevance. But a quick look at the Big Ten East standings shows a three-way tie for first place, with Michigan on the outside looking in. Their senior-laden 2016 team has taken a step back this season, dropping a rivalry game against Michigan State before being whitewashed by Penn State. The significance of the beatdown that happened this past Saturday night should not be understated. The team Michigan used to be would never give up 7 sacks and lose by 4 touchdowns. Never. The most troubling part for a Michigan fan must be the inconsistent play at the QB position. Jim Harbaugh was seen as a quarterback whisperer, but both Wilton Speight and John O’Korn have played poorly this season, seeming to regress with each game. 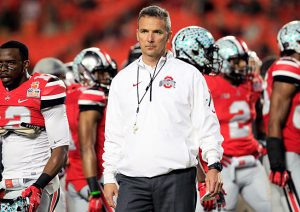 Since arriving in Columbus, Urban Meyer has continued the consistent winning tradition Ohio State fans have come to expect. However, recently they’ve come up short when it matters most and are no longer the unquestioned kings of the Big Ten.

Ohio State is still a top-five team every year. They enjoy a recruiting pipeline that never allows them to drop too far after graduations and early NFL draft exits. They have A-list talent up and down all sides of the ball, and will as long as Urban Meyer is their coach. But they have developed a disturbing trend of losing the one game each year that they can’t afford to lose to ensure a conference championship game berth. In 2015, they lost an inexcusable game on their home field to a very overrated Michigan State team that went on to get destroyed by Alabama in the CFP. MSU beat an even more overrated Iowa team in the conference title game, who themselves were obliterated in the Rose Bowl. Last year, of course, they were upset by then-unranked Penn State after one of the worst executions of a field goal attempt I’ve ever seen. For some reason, Meyer did not use one of his TWO timeouts to make sure the field goal unit got set. Instead, they ran onto the field and rushed the attempt before the play clock ran out. I guess talent is only realized if it’s used correctly. After the Old Boys ensured OSU wasn’t passed over for the CFP again, Clemson promptly shut them out while Penn State played a white-hot USC team even on essentially their home field. Penn State was not intimidated by #2 OSU last year, nor was Michigan State the year before. The reality is that the Buckeyes no longer intimidate opponents the way they used to.

It is too early, and even inaccurate, to say that Michigan and Ohio State are has-beens who are no longer the class of the Big Ten. But it is fair to presume that Michigan may not be the team we thought they were after Harbaugh took over. Further, it is reasonable to conclude that Ohio State is not maximizing the elite talent they enjoy as they continue to fall short against college football’s best teams. To whom much is given, much is expected, right?

Penn State and Wisconsin have quietly become the class of the league. The Badgers get Michigan November 18, where Michigan will likely pick up its third of at least four losses. Penn State has its opportunity for complete ranking-validation this weekend, where it is asked to play its biggest rival, on the road, with revenge on its mind. The game feels like an inflection point, not for the season, but for the State of the Big Ten. A win would help to confirm that the balance of power has definitively shifted to the New Big 2.