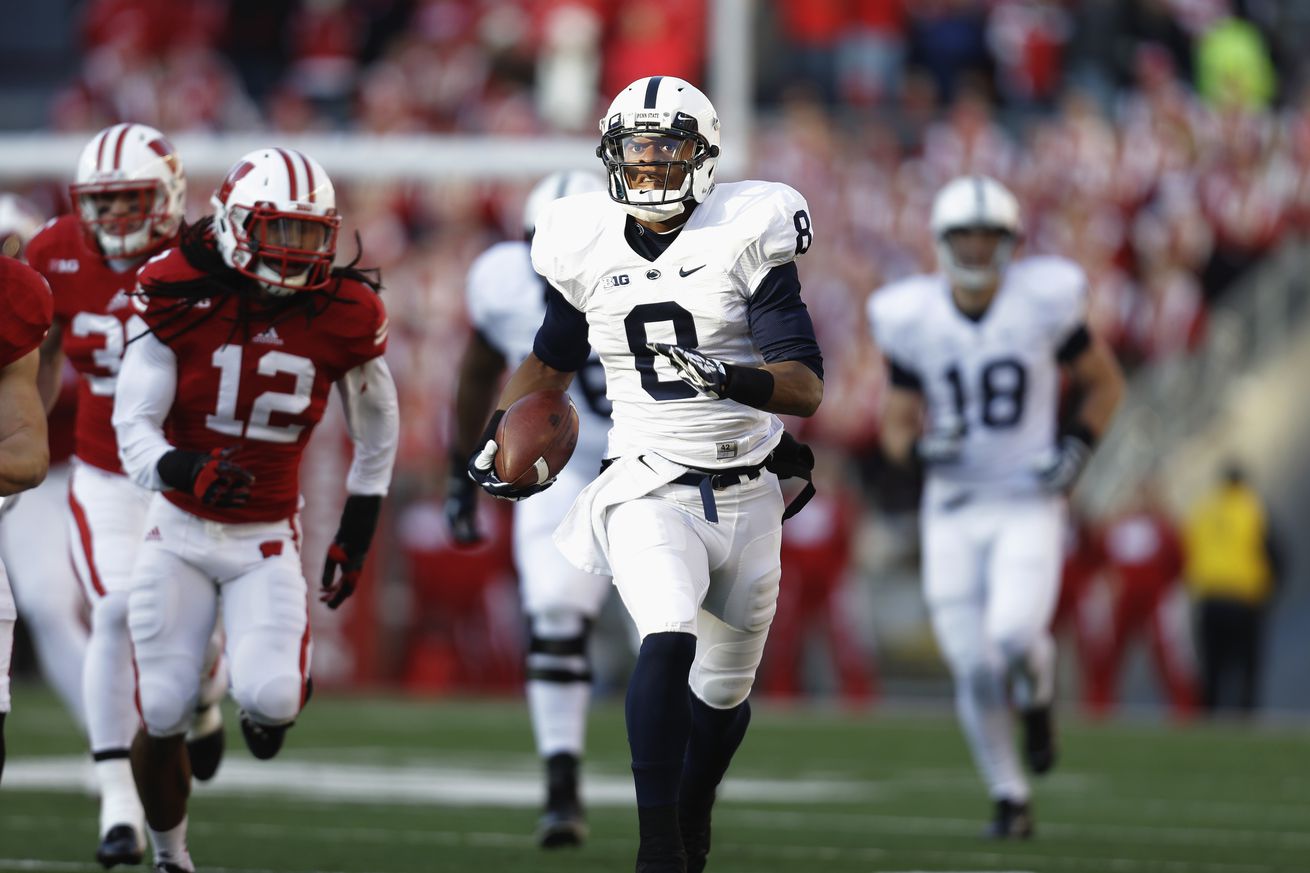 This is not a new concept, but one I thought I’d revisit because, y’know, off-season n’at. Here’s the premise: you’ve got $30, and have been tasked with building the best Penn State football team possible. You have $15 for offense, and $15 for defense, so spend wisely! For the sake of ease, this will just be Big Ten-era players.

On offense, you must choose one QB, one RB, one WR, and one TE, and then one additional Flex player from the remaining RB, WR, and TE selections.

In case any of you were wondering, here’s my offense:

I decided to go RPO with my offense, so with my first pick I had to take Saquon. I wanted a QB that could do everything, so I went with Michael Robinson at QB next, leaving me with 7 dollars for three picks. I originally wanted Chris Godwin as my WR1, but I realized I wouldn’t have enough money left for my Flex position, so I instead dropped down and grabbed Derek Moye for a good value at $2. At TE I went a little light, opting for Isaac Smolko for just $1. With my remaining $4, I unloaded on WR and picked Bobby Engram.

Robinson and Barkley running the RPO would have been an awesome thing to behold, especially with how difficult to tackle the two of them are. At WR, I’ve got two guys who can do pretty much everything between the two of them – Engram is a bit more of a deep threat than Moye, but either one could take the top off a defense without much issue. That leaves Smolko, who I would use chiefly as a possession-type receiver, exploiting the voids left behind by the WRs; release him up the seam or into the flats, and consistently churn out gains of 6-10 yards.

From recent research, I knew Penn State was pretty stacked at DE, DT, and LB, but the secondary was another question. I led with safety, going with Marcus Allen, followed by D’Anton Lynn at CB, and $8 for the remaining three picks. At $3, Micah Parsons was a legit steal, probably the best value in this whole endeavor, regardless of position. With my last $5, I wanted to get after the QB, so went with Courtney Brown at DE, arguably the best DE PSU has ever had. And with my lone $1 left over, I got one of the more underrated DTs in Kevin Givens.

I think this defense is a very solid one, but one that is built for pass defense more than run defense. Givens is a 3-Tech at DT, so teams could try to attack the middle of the line. Luckily Parsons and Allen are excellent in run support, leaving Brown to get after the QB. Lynn isn’t necessarily a shut-down corner, but is very solid overall. I’ll rely on my pass rush to disrupt the line, and thus the QB, meaning Lynn won’t be asked to do too much; just a little bit of coverage, and the QB will get swallowed up in no time.

What say you, dear reader? What does your team look like?