Michigan: Just Give Me 2 More Seconds

For decades, the name of one state could ignite an explosion of college football rage in Penn State football fans – MICHIGAN. All the pageantry so endearing to its fans, from the winged helmets and banner slaps to the monotonous, repetitive, mind-numbing refrain of The Victors, pushed Nittany Lions players, coaches and fans to the brink of a riot after epic games. From 1997-2007, Michigan beat Penn State 9 consecutive times. That streak excludes 2003-4 (the two worst seasons in recent Penn State history) when PSU was somehow able to avoid the Wolverines, who won the conference title both years.

There were some painful losses among the 9, notably those in Beaver Stadium. “Judgement Day” in 1997, where #4 Michigan walloped #4 PSU to springboard their run national title along with 2-way player Charles Woodson’s Heisman campaign. 1999 saw Tom Brady overcome a 10-pt 4th quarter deficit to edge the Lions 31-27. In 2006, the Wolverines knocked out two Penn State QB’s and suffocated the offense. It was also my wedding day, so I’ll never forgive them for that. But it was two games at Michigan Stadium that epitomize why Michigan elicits so much ire from Penn State fans.

Water cooler etiquette dictates that fans should not blame officiating for a loss. However, the 2002 and 2005 losses in Michigan Stadium each have moments that, at least to Penn State fans, definitively prove that Big Ten officials slanted their calls in favor of the Wolverines.

With Penn State driving down the field, Zack Mills hit Tony Johnson inside the Michigan 25, which would have given them a first down and put them in position to kick a game-winning field goal. Instead, Johnson (who video evidence later showed had BOTH feet in bounds) was ruled to be out of bounds. There was no instant replay at the time. Coach Paterno went on record after the game, raising the following concerns: 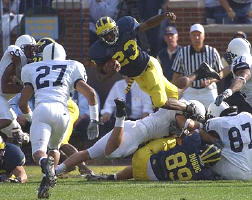 Our first examination into the heartbreaking Penn State vs. Michigan rivalry begins with the 27-24 loss in 2002

Aftermath: Michigan would go on to win in overtime, handing the Nittany Lions their second loss. The Wolverines  would finish in the top ten that year, one conference win (and place) ahead of Penn State. The Big Ten agreed to an extensive review of Penn State’s complaints about the officiating, and that game helped pave the way for a video review pilot program in 2003 with full conference implementation in 2004.

This one will be long-remembered by fans of both teams. After the painful 2003-4 seasons, 2005 became a renaissance year for Penn State. Paterno had met with university administration in the offseason to discuss an exit strategy, during which asked them to be patient. The coach knew he had to win in order to make it past another year, so 2005 was critical. They came up with a miracle first down against Northwestern on a 4th and 15 to Isaac Smolko, leading to Derrick Williams’ game-winning catch. The Lions destroyed Minnesota in their next game cracking the top 25 to place No. 16, then suffocated Ohio State in a classic performance by Tamba Hali, Paul Posluszny and the defense. The now #8 Nittany Lions entered the Michigan game with sudden BCS bowl aspirations. 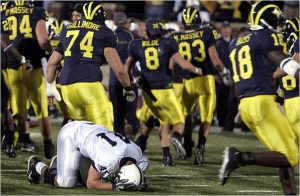 One of the most infamous endings to any Penn State game – vs. Michigan in 2005

The game itself went back and forth, with Penn State scoring twice in 17 seconds to take an 8-point fourth quarter lead. Michigan came back to pull ahead by 3, then Michael Robinson led Penn State on an epic 81-yard drive with no timeouts, converting a 4th and 7 and scoring a touchdown himself. Thanks to Steve Breaston, Michigan started its final drive near midfield. 3 Chad Henne completions and a Mike Hart run set Michigan up at the Penn State 16. Then the fun begins. Henne then completed a pass to Manningham to the Penn State 10 with the clock at 0:04 and called timeout. Michigan Lloyd Carr argued that two seconds be put back on the clock, to make it 0:06 remaining. Coaches could call time out from the sidelines, so Carr felt he was owed extra time. The next play was an incompletion to Breaston, the end of which saw the clock frozen, for what seemed like an eternity, at 0:01. Henne hit a somehow wide-open Manningham on a crossing route to secure the walk-off win. There was a small table in front of me as I was watching that game…after that play, well, there was no table anymore.

Neither of my biggest issues are that time was added to Michigan’s drive, as Coach Paterno argued and got time added to Penn State’s final drive as well. The two problems I have with the end of that game was that the it didn’t at all appear to take 2 full seconds between when Carr called timeout and when it was granted. Maybe one second would have been reasonable. But the fact that the last “second” following Breaston’s incompletion took about 3 seconds of real time is a little too convenient given Ann Arbor’s propensity for home-cookin’. Granted, Michigan was given incredible field position against a prevent defense, which allowed them to even get close. But they still mismanaged the clock, which should have cost them the game. They were given by all accounts a free play, which to their credit they converted against a shell-shocked defense that broke down on the last play.

Aftermath: The 2005 season was a race to #3, though, as the BCS title game was a foregone conclusion. Matt Leinart, Reggie Bush and USC, #1 all year, would play Vince Young and #2 Texas in the Rose Bowl. That matchup was a near certainty to start the year, and unlike most preseason near certainties that one actually happened. If the Lions win at Michigan, they were only #8 at the time, and likely would not have caught Texas anyway. They beat Florida State in the Orange Bowl and finished #3, so the game really didn’t cost the team anything. It did cost Joe Paterno a chance to have an undefeated season in five (!) consecutive decades, which is ridiculous on every level. But that team brought Penn State back from the doldrums of 2000-2004, and cemented Michael Robinson’s legacy at Penn State.

Fortunately, this year’s game is at Beaver Stadium, and fortunately, Penn State has Saquon Barkley (and a better scoring defense than the vaunted Michigan unit). Here’s hoping Dick Honig and his cronies are retired and playing bridge somewhere during this year’s game.