Bye weeks are usually difficult for Penn State fans. We love spending part of a Saturday watch our team in the classic blue and white, and very often ringing the victory bell at game’s end. This year’s bye has been especially difficult, as the last time we saw our team they were still shell-shocked by a wild, double-digit come-from-ahead loss to the hated Ohio State Buckeyes.

The good news this year is that despite not playing a game, the Nittany Lions moved up 3 spots, returning to the top 10, and actually achieving their highest rank so far this season. And while the Lions are seemingly on the rise after their loss, this week’s opponent is headed in just opposite direction. Michigan State exits the rankings after a 10-point home loss to previously 1-3 Northwestern. Given that result, all signs point to a trip to Blowout City this weekend in Happy Valley. 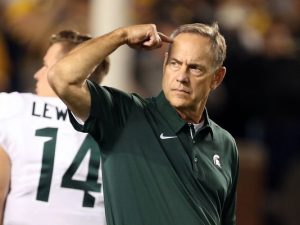 To coin Lee Corso: not so fast, my friend. Michigan State has developed a habit in recent years of bouncing back. The Spartans have been good at avoiding slides, not losing back-to-back games since 2012 (excluding the train wreck that was Michigan State’s 2016 season). They’ve also either beaten Michigan or Ohio State or lost to one within 3 points each year since 2012. Penn State has won only once in the last 4 meetings, themselves. So going into the game against Sparty this week, James Franklin can count on two things: the Spartans will likely play much better than they did last week against Northwestern, and Mark Dantonio will have his defense prepared with game film on what Ohio State did to Miles Sanders and the running game 2 weeks ago.

Last year’s game was frustrating on many levels for Penn State fans. A ridiculous 3.5-hour total delay due to lightning completely messed up the rhythm of the game. But there are a lot of similarities: both this and last year’s games will follow 1-point, emotionally-draining losses to Ohio State, who made double-digit 4th quarter comebacks in each. Penn State has developed a penchant for jumping out to big leads against elite teams, but failing to close them out. That says the preparation and talent levels are there; the “elite” factor, though, as Franklin noted in his post OSU-game comments, still needs to be developed.

It will be great to see how the young team’s focus after the bye week. Abhorrent tackling plagued them against Ohio State, likely costing them the game. Dropped passes still show up at inopportune times. A critical fumble snapped the stalled Buckeye offense out of their first-quarter funk. To beat good/elite teams consistently, preparation, focus and execution all need to occur together. Know the tendencies; catch the ball; attack the legs of the runner. The Nittany Lions still have a great shot at the Rose Bowl, and pounding Michigan State would be a great first step toward achieving that goal.