J.T. Barrett is halfway through what seems like his 6th season as Ohio State’s starting quarterback. He will leave Columbus with nearly all of the major career and season school records a quarterback can have. Barrett has thrown for six touchdowns in a game twice and was the primary QB on Ohio State’s 2014 national championship team. He has won the Griese-Brees Big Ten Quarterback of the Year in both 2014 and 2016. This year, he is on pace to exceed 3,000 passing yards and career-best 36 TDs. By the numbers, Barrett has been the best and most successful quarterback in Ohio State history, which is an accomplishment in and of itself due to their storied history. 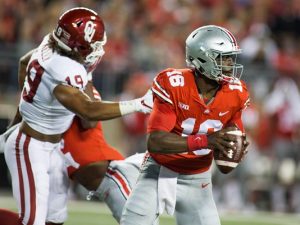 J.T. Barrett shouldered much of the blame for the early season loss against Oklahoma

However, much has been made recently about JT Barrett’s struggles, to the point where some have inferred that he is the reason Ohio State was pounded in the second half by Oklahoma. Of primary concern was his inability to stretch the field. Going back to the Clemson game last year, through September Ohio State has seemed very inept on offense. No one questions his heart, leadership and importance to the program. However, at a school where success is based entirely on results from your last game, history has a very short shelf life. To his credit, since the Oklahoma game, he has put up video-game like numbers and led the offense to four consecutive 50-point games. The problem is, those have come against UNLV, Rutgers, Maryland and Nebraska.

There is significant disparity among Big Ten teams this year; all the teams against which Ohio State put up 50 points have losing records and seem allergic to defense. Nebraska is especially disappointing. But as Barrett goes, so go the Buckeyes. Michigan State in 2015, Penn State, MSU, Michigan and Clemson all took away the deep ball and condensed the offense. While the analysts have backed off of their sharp criticism of Barrett after the Oklahoma game, Ohio State has backed away from playing competitive teams (though to be fair the schedule is largely dictated to them). 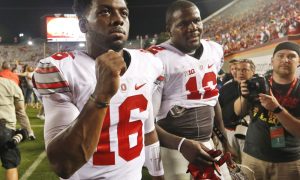 J.T. Barrett was replaced by Cardale Jones as a starter multiple times in his Ohio State career, both due to injury and performance

Barrett likes to run, and can escape containment as he showed in last year’s game. He has not so much regressed as he has affirmed what it takes to beat him. It is worth pondering, though, what would have happened had he not been hurt against Michigan during the Buckeyes’ title run in 2014. Recall that it was Cardale Jones throwing rainbow touchdowns to receivers and [mainly] Ezekiel Elliott running like a man possessed that delivered them the title. Would Barrett have been able to beat both Alabama and Oregon? Maybe, due to Zeke.

After four years, Barrett is who he is and will not suddenly play differently. Ohio State has shown to be a good front-running team, but struggles when pressed. The Nittany Lions, who have yet to allow a first quarter point this season, need to get an early lead on the Buckeyes, likely accomplished by stretching the field with the deep pass. This reduces the ability of Ohio State to rely on the running game and will force Barrett to drop back. Penn State, conversely, can succeed either playing with the lead or coming from behind. Their leadership is used to fighting through adversity. Penn State has better players, better coaches, and an affinity for pulling out tight games. Ohio State, on the other hand, has faltered in the face of challenges in recent years. 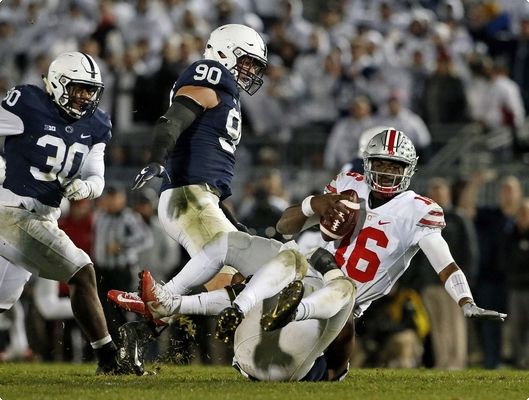 Saturday night’s matchup against #2 Penn State may be one of J.T. Barrett’s last chances to show he can be elite against stiff competition. However, if history remains constant, fortune should smile on the Nittany Lions

JT Barrett has done a lot of great things throughout his Ohio State career, and is by all accounts a great quarterback. History, though, indicates that he’ll likely come up small Saturday night, with Ohio State becoming just another notch in Penn State’s belt.