Since Penn State joined the Big Ten in football in 1993, Michigan has the best winning percentage against them at 65%. Ohio State is next at 60%. Neither of those is a surprise given the historical success of both those programs. The surprise, though, is in the only other school to boast a winning against Penn State as a conference member, with at least 4 games played. 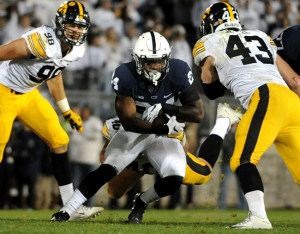 Since Penn State joined the Big Ten, the Iowa Hawkeyes have been an unlikely thorn in their sides – winning more often than not.

That school of course is Iowa. The site of Penn State’s first Big Ten conference game in 1993 (that year a 31-0 PSU whitewash). But while Michigan and Ohio State introduced Penn State to the rigors a full, no-compromises conference schedule provides, Iowa quietly began to assert itself as an annual thorn in the Lions’ paws. From 2000-2010, Penn State only registered 1 win against Iowa, its lowest winning percentage against a conference opponent in that 11-year span. Since 2000, Penn State has only won once in Iowa City.

Joe Paterno bested Iowa icon Hayden Fry in four out of six meetings, but Fry’s coaching disciple Kirk Ferentz took over in 1999 and instantly had Paterno’s number. After dropping his first game against Penn State, Ferentz led the Hawkeyes to 9 wins in the next 10 games. These included some of the most critical, season-derailing outcomes the Nittany Lions suffered since joining the Big Ten. For entertainment, I’ve included some classic nicknames we shouted at the players from the stands, with apologies to Chris Berman of course.

The 2000 Penn State-Iowa clash in 2000 was the first overtime game for both programs. Iowa jumped out 13-0, but Rashard Casey had a tipped-pass interception to seal the game for Iowa in the second overtime. Iowa only had 3 wins on the year, but the loss guaranteed Penn State a losing season for the first time since 1988, the first of four in five years.

The 2002 game, again in Beaver Stadium, was brutal. Iowa led 23-0, then 35-13 with 8 minutes left. Zack “General” Mills engineered an incredible comeback, knotting the game at 35 before heading into overtime. Iowa scored a touchdown on their possession, and the officials blew an obvious TD catch by receiver Tony Johnson. After the loss, Paterno chased down Dick Honig, the referee who always seemed too happy to have a call go against Penn State.

In 2004 the teams played the worst college football game of all time, with a baseball-like score of 6-4. Glass-is-half full people will say it was a defensive slugfest. If you were dumb enough to waste money on that game, like me, it was easily the most frustrating 3.5 hours ever spent on something supposed to be fun. The Lions’ offense was so bad (or defense so good), that Iowa took an intentional safety just to get the anemic Penn State offense on the field. Robbie “all that glitters is” Gould missed two very short field goal attempts. To see him in the NFL years later was unbelievable after this game. Some other offensive (pun, sorry) stats for the PSU: Mills and Michael Robinson each threw 2 interceptions, and when coupled with zero touchdowns, yielded 2 QBs with negative adjusted yards per pass attempt (AY/Y). This is a complex metric that includes TDs and INTs, and accurately quantifies the level of passing futility they experienced that day. Tony Hunt, who had back-to-back 1,000-yard seasons, was held to 48 yards on 16 carries. Though Iowa would win a share of the conference title and Penn State’s defense would be the cornerstone of the great 2005 season, this game (coupled with Toledo’s 24-6 win in 2000) most exemplifies how awful the millennium started out for Penn State football. 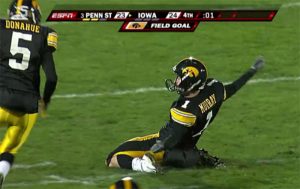 In 2008…ugh, 2008. That year most resembled 2016 to me, for a lot of reasons, but here the main similarity was the narrow loss to an unranked road opponent. The 2008 team walked into Columbus, having not won there in 30 years, and gritted out a 13-6 win after Big Ten MVP QB Darryl Clark was knocked out of the game with a consussion. They had a bye week the following week, which seemed like a break so Clark could recover. Problem was, Penn State then spent two weeks hearing about how they could (or even should) win the national championship, on the backs of Clark and Evan “Rolls” Royster. Clark still wasn’t recovered from Ohio State, and faded in the fourth quarter throwing a crushing interception with under 4 minutes left with a 9-point lead. To this day, I blame the horrible pass interference penalty on Anthony Scirrotto for that loss (not the fact that Penn State forgot/did not want to bring sideline heaters). That call just can’t be made on that play, a horrible throw, as Scirrotto was clearly going for the ball. The worst part was, had PSU won at Iowa and won out as they did, they likely would have played Oklahoma for the title, avoiding both USC (thought to be the best team at the end of the year, sound familiar?) and Florida, the eventual champion.

The 2008 loss started a string of three consecutive losses, the latter two less competitive, before Penn State finally turned the tide. The home loss in 2009 cost them a trip to the Orange Bowl. Iowa is good at messing up favored teams’ seasons, especially on its home field late in the year (see last year’s Michigan game). But the Iowa game last year cemented the fact that the nucleus of this team is special. They had no answer for Saquon Barkley then, and I expect him to break out in a big way rushing the ball this year. It’s easy for this year’s team to overlook Iowa’s historic success against Penn State, but I know at least one man who’s had nothing but Iowa, Iowa, Iowa on his mind since the clock showed zeroes last Saturday night.