Impact Play: Cam Brown And Jan Johnson Arrive At The Point Of Attack 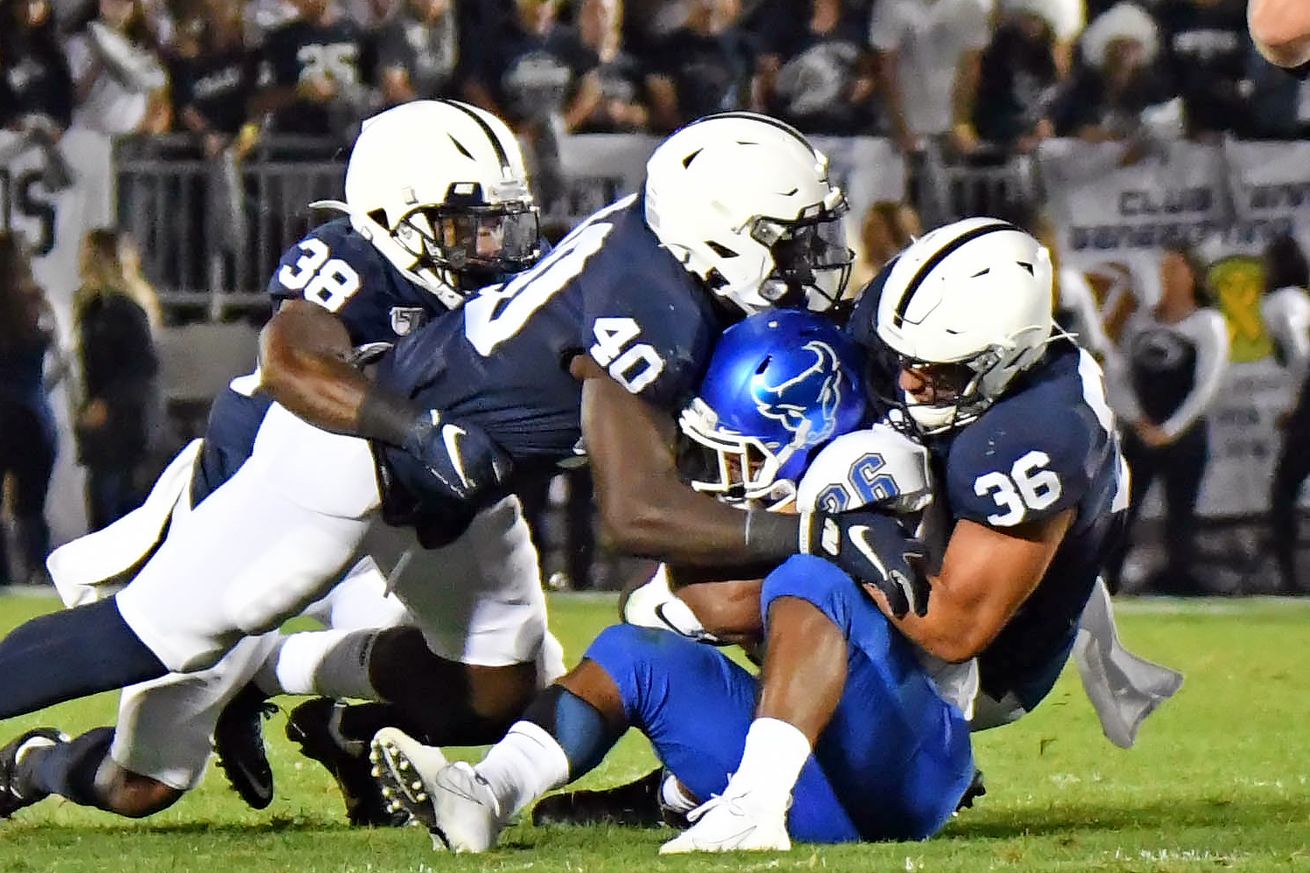 It was a great play by the entire defense.

Penn State’s starting linebackers were the top three tacklers against Buffalo. Jan Johnson led the way with 14 followed by Cam Brown and Micah Parsons , who each had ten.

The linebackers have often been the identity of the Lions’ defense and this year there is a great deal of talent and depth at that position.

Cam Brown got his first taste of competitive action. Brown missed the first half against Idaho and by the time he got into the game in the second half the score was lopsided. He made an immediate impact, causing a fumble and recovering it a little more than five minutes into the game against Buffalo. He got an assist on the play from Jan Johnson .

Let’s take a look at the play that set up Penn State’s first touchdown of the day.

It was 3rd and 3 early in the game and the Lions had their base personnel on the field with Shaka Toney (18) at left defensive end, PJ Mustipher (97) at defensive tackle alongside Robert Windsor (54) and Yetur Gross-Matos at the other end. In the secondary, safety Jonathan Sutherland (26) was giving Tariq Castro-Fields (5) deep help at the top of the screen.

On the near side, safety Garrett Taylor (17) provided deep help. John Reid (29) watched the outside area at the first down marker. Cam Brown (6) began the play spread outside, aligned a few yards off the slot receiver, able to take away a slant thrown to the marker. That’s two savvy, veteran defenders right at the potential point of attack for a pass.

With just the running back and receiver lined up left of the center, Micah Parsons and Jan Johnson did not have to worry about covering a pass over their heads. There were two defenders behind them covering one receiver. They only had to watch the running back and quarterback, which they did very well.

Here is what it looked like just before the snap.

At the snap of the ball the four defensive lineman were immediately fighting the battle on the left side of the blue line, which represents the line of scrimmage. That left Parsons and Johnson free to pursue the runner, which they did while staying short of the first down marker.

John Reid on the outside did a great job of protecting the first down marker in case of a pass, but also kept his eyes up so that he could come and support the run, which he did by forcing the running back to cut it inside.

Cam Brown took care of his pass responsibilities and then came up and made the hit, just as Jan Johnson met him coming from the other direction. Micah Parsons looked like Koa Farmer did so many times last year, hanging back long enough to make sure the run wasn’t coming his way, then taking a good pursuit angle to the play, only to stand and watch while everyone else had all the fun. Even though Parsons did not touch anyone on the play, his job was just as important as the other ten players on the defense.

The controls on the gif will allow you to pause, slow it down, and switch to HD.

It was a great play by Cam Brown, and he deserves the credit for what he did, but the rest of the defense played it perfectly as well. All areas of the field were accounted for in both the run and the pass. Had Buffalo run the other way, they would have been dealing with Yetur Gross-Matos , Micah Parsons, and Tariq Castro-Fields . That’s no bargain, either.

While the level of competition in the first two weeks was not what it will be moving forward, there aren’t too many teams in the country that match up well against the lineup that Brent Pry is able to put on the field.

Go Easy On Our Own

Last year Koa Farmer took a lot of abuse from Penn State fans, most of it was unfair. With only two games played there are murmurs of discontent from some fans concerning players that are on the field. Whether it is running back, offensive tackle, or linebacker, when a negative play is made, some call for a change in personnel.

Jan Johnson is the starter. What has Johnson done to deserve the spot? You would have to ask Pry. Otherwise you could trust one of the best defensive coordinators in the game to select the player that gives his team the best chance to win. The better the defense plays, the better Pry’s chances of getting a head coaching job, a raise, or simply achieving at a higher level within his profession.

Johnson wrestled in eight duals for the National Championship Penn State team in 2015 while redshirting for the football team. The next year he was thrust into the lineup when the Lions faced a number of injuries and suspensions at linebacker, and was injured during a blowout loss at Michigan.

Johnson spent the following months rehabbing the injury, unable to enjoy things such as waking up pain free, walking without a limp, practicing with the team or playing football. He played sparingly the following season but last year won the starting job at middle linebacker, holding off Micah Parsons initially and then Jesse Luketa and Ellis Brooks .

Johnson did all of this while graduating with a degree in Psychology in 2018, a master’s in management and organizational leadership in May of 2019, and is working on a third degree in health policy and administration. He is one of the most decorated athletes in recent memory when you consider the wrestling national championship, football letters, and degrees.

And Jan Johnson is Brent Pry’s choice to play middle linebacker. No player or coach is above criticism, but it is predictable that Johnson will be the scapegoat in the mind of some fans when anything bad happens to the Penn State defense. We should remember, when throwing harsh comments at our fellow Penn Stater, to include coach Pry in the discussion. It is Pry’s decision after all.

There are a half-dozen linebackers on the team that would start in Johnson’s place were they given the nod by Pry. If a fan is unhappy with who is on the field, the ire should be directed at the man making that decision.

To presume that another player should be on the field instead of Jan Johnson is to presume to have more knowledge of the situation than one of the best linebacker coach/defensive coordinators in the country. Pry will put the eleven players on the field that he feels will give the team the best chance to win.

I have no issue with whoever Pry chooses to play. I would figure that it is the correct choice and if it doesn’t appear to be so, then it is probably something that I don’t know that is causing the confusion. The confusion would be on my end. Either that or Brent Pry doesn’t know who should be playing on his defense.

It’s fair to criticize Jan Johnson but it would be nice to remember that he is trying his best, has beat out several talented football players for the spot, and has done a great deal for the university.

Johnson grew up just outside of Reading, Pa., with his father a former Penn State wrestler, his mother swam for the Lions. Johnson’s uncle wrestled at Penn State and his aunt swam. He is Penn State through and through. And he will be right in the middle of the battles this year, fighting hard, risking injury, and representing our favorite team.