Best Case Scenario: How the Nittany Lions Finish 2019 With a Perfect Record

Penn State enters 2019 with plenty of question marks. The Lions had 6 players selected in the NFL Draft, another 6 undrafted free agents among 13 senior-eligible players on the roster. In PSU Zone’s annual season preview, we predicted a 7-5 finish. This perspective was driven by the tremendous loss of talent coupled with a murderous stretch of the schedule against the conference’s best teams.

The Nittany Lions visit Ohio State, Iowa, Minnesota, and Michigan State and host Michigan. With questions as to who will start at QB and RB, it is difficult to see how Penn State can replace Trace McSorley and Miles Sanders. However, James Franklin has had success recruiting during his time in Happy Valley, and the blue-chip talent on the roster can replace the significant departing talent.

A few bounces differently, and 2018 was an entirely different year. If Miles Sanders doesn’t fumble at the end of the first half against the Ohio State game, Penn State could easily have given the Buckeyes the Purdue treatment they got later in the year. Had the Lions converted any of about a half dozen plays, they would have finished off Michigan State. What if the Citrus Bowl had gone 5 minutes longer? It is easy to see how Penn State could have finished 11-1 in 2018. 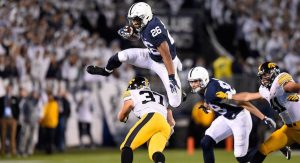 The Hawkeyes love to mess up games. This year’s team is better than they were a year ago, and they get Penn State on the biggest weekend of the year in Iowa City. However, if Penn State can jump out with a special teams or quick-strike early TD, Iowa will have to play from behind, something it does not like to do. Special teams or a gadget play could be the difference. While they shouldn’t take a reckless gamble, the Nittany Lions could try an RB pass or fake kick to douse the energy in the stadium early. They can go punch for punch with the Hawkeyes, but Kirk Ferentz usually has Iowa prepares and fundamentally sound, so PSU is unlikely to get any gifts. Penn State can not leave points on the field against a team built to limit mistakes. 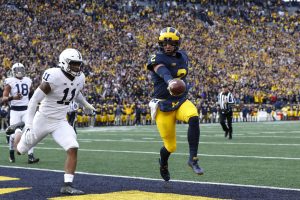 The ability to contain Michigan QB Shea Patterson could be key in upsetting Michigan in a friendly, whiteout environment

Michigan has the most talent of any team on the Lions’ schedule. They return Shea Patterson at QB and were the only team that Penn State could not play with last year. Fortunately, the game will be at home, and a White Out, but the combination of talent and experience is the reason many think Michigan will win this game. Much like the Penn State-Iowa game, the road team will look to quiet the crowd early. Michigan wants to get a lead and keep Penn State at arm’s length as long as possible. I don’t think Jim Harbaugh can out-coach James Franklin, so weathering the Wolverines’ likely early surge will be important. Holding them to field goals, winning field position, and limiting big plays early will be critical to upsetting Michigan. Patterson will want to throw the ball downfield, but deep 7-step drops make him susceptible to the pass rush. If the Lions’ DL’s can get home early, Patterson will have one eye on the lines and be less confident. If Penn State is within 10 at halftime and proves to be able to stop Michigan’s offense, they’ll have a great shot to win. The Nittany Lions’ defense also needs to eliminate Patterson’s success running the ball when a play breaks down. Patterson’s escapability has hurt them mightily in the past. 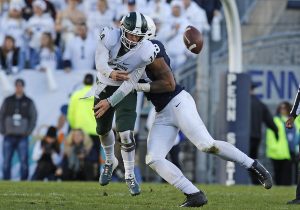 If Penn State’s defense is able to stifle the Spartans run game and force QB Brad Lewerke into 3rd and long situations, the Lions can leave East Lansing with a W

This game has been infuriating the past two years. Penn State should have won both, and Mark Dantonio outcoached James Franklin. The Spartans are being overlooked by many, who predict the annual Michigan-Ohio State game to be the only real game of consequence in the Big Ten this year. I think Michigan State will be better, making the game all the more dangerous for Penn State. However, this rivalry is often competitive, so the game is again likely to be close. Dantonio likes the trick play himself, so Penn State must do a better job of not leaving points on the field on offense, and stopping drives on defense. QB Brad Lewerke is pedestrian, even as a senior. I think Dantonio employs gadget plays to reduce the impact his QB has on the game. To win, Penn State needs to stop Michigan State on first and second down, and stifle the running game. Putting Lewerke in 3rd and long situations significantly increases the likelihood of him making a mistake, and decreases the probability of trick play success. 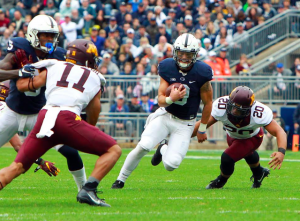 We gambled in our season preview and predicted that this would be the year the Golden Gophers live up to their potential. If not, it’ll be business as usual in a Penn State victory.

On the surface, the Golden Gophers’ schedule before they play Penn State, doesn’t look that challenging. If they survive the perennial early-season Big Ten late-night game at Fresno State, Minnesota has a legitimate chance to enter the game against the Nittany Lions undefeated. Yep, I said MINNESOTA COULD BE 8-0 ENTERING NOVEMBER. They ended 2018 with 3-TD wins over rival Wisconsin and Georgia Tech in the Quick Lane Bowl. 2019 conference games against Purdue, Illinois, Nebraska, Rutgers, and Maryland don’t exactly constitute murderers’ row. However, last year, these opponents were 3-1 against Minnesota (Rutgers was not on the schedule) and scored an average of 40 points. If Minnesota’s defense doesn’t improve, they may not be able to keep up with Penn State in a track meet. 2019 looks like the year Minnesota takes a step forward, and they avoid Ohio State, Michigan, and Michigan State. However, if the Gophers continue to play down to middle-tier competition in the Big Ten, Penn State will take them down. 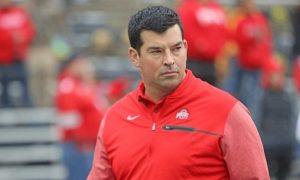 Changes at both head coach and quarterback make this year’s Ohio State team a bit more unpredictable. If the chemistry doesn’t happen in year 1 for head coach Ryan Day, the more experienced coach may walk away with the victory when the Buckeyes host the Nittany Lions

This is the game against the Big 3 that I think Penn State has the best chance to win. The Buckeyes will be favored, may be in the top 10 or 5 at this time, and are playing at home. But Penn State came within a point the past two years and outplayed Ohio State for much of the game in both years. The Nittany Lions seem to have a good game plan for OSU, but as soon as adversity strikes, they can’t recover. Sanders’ fumble last year was a great example. Without that, Dwayne Haskins looked totally lost, and the Buckeyes may have gotten run over. A new QB and head coach could level the playing field, given Urban Meyer’s ability to out-adjust James Franklin after halftime. Ohio State will always have NFL talent across the field, but if Penn State can limit mistakes and maintain composure following adversity, they have a good shot at upsetting OSU. Making field goals and finishing drives will be critical.

There you have it, a 7-5 record being perilously close to 12-0. Penn State is slowly rising to reload no rebuild mode, and 2019 could be the first time we see fresh talent come in, pick up the baton, and keep sprinting forward. An overlooked factor that could move the offense forward is Sean Clifford’s ability to run, something he’s worked on this during the offseason. If he can freeze opposing linebackers and safeties only for a second, it might allow the speedy receivers to get behind the defense.