MMQB: How Does Penn State’s 2020 Defense Shape Up? 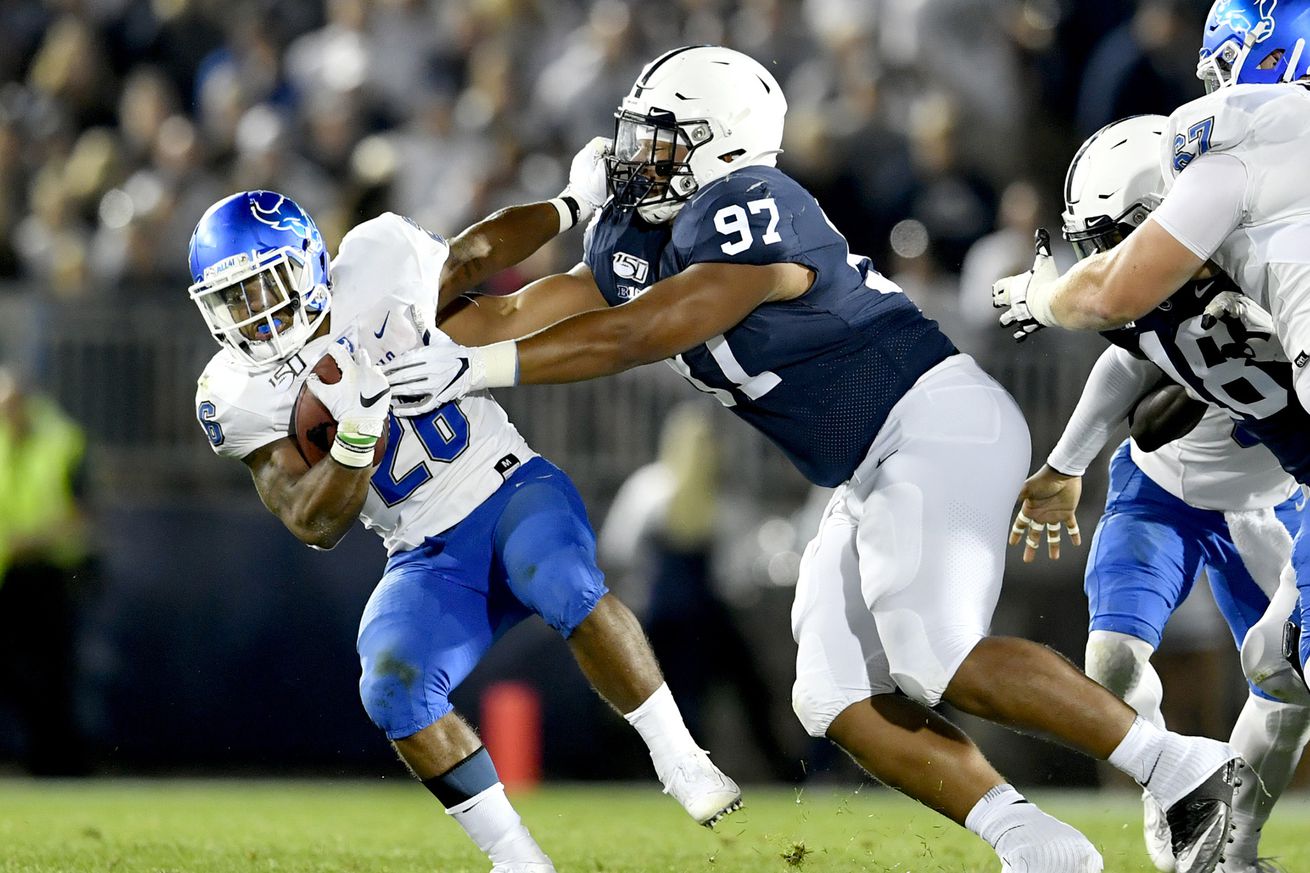 This gon’ be gud.

We recently got a glimpse at the 2020 depth chart, and took a look at how close BSD’s prognostications were. But now let’s take a little bit deeper look at starz, statz, and what we could expect from the defense next season.

The good news up front is the return of Shaka Toney . He flirted with heading to the NFL, but opted to return for one last go at things. He’ll bring a stabilizing presence, as a returning starter. This will be a recurring theme across the defense – no unit returns all of its starters, but there isn’t a spot across the defense that is brand new either.

Second, let’s talk size. Mr. Oweh has got some size, and could very easily slide inside on passing downs. Having a pass rush package that includes all three of Toney, Oweh, and Isaac isn’t fair.

Third, starzzz. Shaka is the only one on the two-deep who isn’t a former blue chip recruit. This will be another theme, as there is a BUNCH of talent on defense.

Starting on the inside, I want my nose tackle to be a human bowling ball, and you don’t get much moreso than returning starter Antonio Shelton . I also like my 3-tech to be a giant man-mountain, and hey wouldja look at that, PJ Mustipher stands 6’4” and comes in at 305 pounds.

I’m also a fan of the backups, as Judge Culpepper presents a (somewhat) lighter, quick-twitch DT, and Fred Hansard is also quite a mountainous individual. There’s also a really solid mix of experience and starz across the interior defensive line. I think the defensive line in general will be just as stout as last year’s – the loss of Yetur Gross-Matos on the outside may mean that the rush defense won’t be quite as good, but I think it will be offset by gains up the middle and an increased efficiency in pass rush.

I mean, what else can you say here? The outside has two former five-star recruits, and the inside has an athletic former four-star, easily the highest rated inside linebacker the Lions have had starting since Mike Hull . The backups are no slouches either, and I’m pleasantly surprised by the arrival of Charlie Katshir . He was one that I thought the portal might claim, so it’s nice to see him start to put it together.

It’s nice when all four safeties you trot out in the two-deep are former four-star recruits. There’s a good mix of size and speed here, but the biggest thing will be communication. Penn State got picked apart against decent passing teams last season, and a big part of it was miscommunication between the safeties and the cornerbacks. Too many times, a cornerback would pass a receiver off to the safeties – or was expecting help over the top – and opposing teams picked up big gains because of it. Given the stoutness of the front seven, the back four should be the priority for Brent Pry and James Franklin this off season.

Not unlike the safeties, there is a LOT of talent at the cornerback position. There is also a good bit of length here, which will help against lanky receivers. Don Johnson was putting together a solid 2019 campaign before his season ended with an injury. If the back four can all get on the same page, paired with what should be a ferocious front seven, passing on the Lions won’t be as easy as it was in previous seasons.

Overall, this is going to be a very good defense. The 2019 Lions made their claim in the run game, and while it may be hard to be AS stout against the rush, I wouldn’t expect a huge drop off either. The front seven is one of the best in the country, meaning teams may once again try to use the short passing game to replace the rush.

The biggest question – and rightfully so – will be how well the back four improve from 2019. If some of the miscommunication issues can be cleaned up, this could be one of the best defenses James Franklin has ever had. The team returns five starters, though most of the new starters have extensive playing experience as well. Across the two-deep, 17 blue chippers will be competing, which is actually more skill than the offense will have.