Heisman Hopes for Barkley & McSorley: Is History on Their Side?

A new season of college football is here. And with that, early season predictions are abundant, including right here on PSU Zone. In fact, if you want our game-by-game predictions, go to our 2017 Game-By-Game Preview and Predictions. This week though, we are going to discuss the Heisman hopes for both Saquon Barkley and Trace McSorley. And we are going to use history to figure it out.

Both Barkley and McSorley have been showing up on “Heisman Watch” lists across sports networks, websites, blogs, you name it, all across the country. And well deserved. The story of the 2016 Penn State Nittany Lions was highlighted by the remarkable season for both 9 and 26. From McSorley’s “home-run swinging” touchdowns, to Barkley literally leaping over defenses on his way to the endzone, both are poised to have another notable year in 2017. 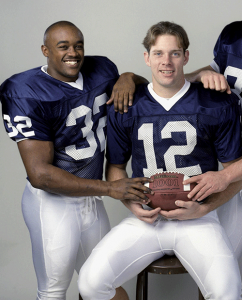 If you are anything like me (and you might just be, since you are on a PSU fan site reading an article about the upcoming Nittany Lions’ season), this 1-2 punch of quarterback and running back donning the blue and white has to remind you of the 1994 squad, helmed by the combo of Kerry Collins and Ki-Jana Carter. That was the last time that Penn State had two players with a legitimate chance of winning the Heisman Trophy. The style of play in college football has changed dramatically since those days. But the excitement of this coming season is very reminiscent of those ‘94, Rose-Bowl-winning, should’ve been National Championship-winning Nittany Lions (no resentful grudges still being held here).

But what would it take for either of these men to bring home that bronze statue? Despite the incredible ’94 run, neither Collins nor Carter came home with the hardware. So let’s talk about the likelihood of these players winning the Heisman.

The Case for Barkley: Can a Running Back Still Win the Heisman? 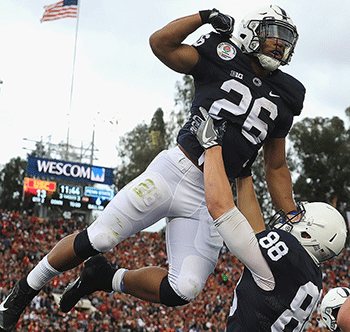 Many experts are picking Barkley as an early Heisman favorite – but can a running back still win in a QB-centric league?

First of all, in recent years, it is very rare for a running back to win the Heisman Trophy. Maybe it is due to the aforementioned change in college football, with more fast-paced, high-flying offenses being the norm across the country. The fact of the matter is that over the past 30 years, only 8 running backs have become Heisman winners. So basically, as a running back, you need to really astound voters and blow the competition away. However, there are some common statistics among those 8 players that could be very telling.

For Barkley to make voters look his way, the bottom line will be rushing yards. Of the previously mentioned 8 Heisman running backs, all of them have rushed for over 1,600 yards in their Heisman year. Additionally, 5 of those 8 rushed for over 2,000 yards in the season. The good news for Saquon is that last year he rushed for nearly 1,500 yards, so with expected improvements this year, he could surpass that threshold. However, in Penn State’s renowned history, only one Nittany Lion has ever exceeded 2,000 rushing yards in a single season (Larry Johnson, 2002).

The advantage that Barkley has out of all previous Heisman running backs, as well as LJ and Ki-Jana, is this fast-paced, high-flying offense of today. Make no mistake, 26 is a huge part of the passing game as well. His Yards from Scrimmage total, could be the new yardage stat that voters look at to put him over the top.

The Case for McSorley: Is He a Legitimate Consideration? 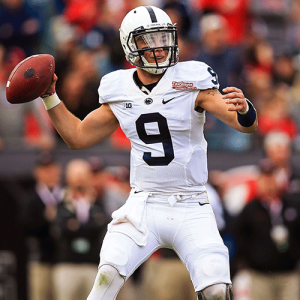 If Trace McSorley wants to join the elite company of recent Heisman winning quarterbacks, he;s going to need to find the end zone at least 40 times.

Right now, most “Heisman Watch” lists have Trace McSorley ranked relatively low, especially compared to Barkley. But do not ever count this guy out. One thing is that quarterbacks tend to win the Heisman a lot in recent years. In fact, 8 out the last 10, and 14 out of the last 17 winners were quarterbacks. So just be the top QB in the country and it’s in the bag, right? Sure, but easier said then done.

If yards are the statistic that gets running backs the trophy, then Total TD’s is what gets it done for the quarterbacks. We are not just talking about Passing TD’s, but any TD’s that they can produce: passing, running, even receiving, kick returns, whatever.

Of the last 7 QB’s that have won the Heisman, all of them have accounted for over 40 total touchdowns for their team. In addition, all of them have actually been in the top 2 of all of college football in total TD’s. Now McSorley is no slough here. He put up 36 total TD’s last year. But in comparison, last year’s Heisman winner and returning contender, Lamar Jackson, put up a total of 51 TD’s on the season. And Marcus Mariota, the previous Heisman-winning quarterback, accounted for 58 total touchdowns in the 2014 season. So if Trace wants to be in Heisman contention, we should hope to be seeing even more of his patented home-run swing. The good news for Trace, it is highly unlikely for voters to give Jackson the trophy 2 years in a row. So, one down (hopefully).

Shooting for lots of touchdowns can often get a quarterback into a lot of trouble. McSorley will also need to be consistent and smart in the passing game to stay in the Heisman hunt. Over the last 25 years, every Heisman-winning quarterback has thrown only 11 interceptions or less, with half of them throwing under 9 INT’s. Quarterbacks have to be keen and poised in the pocket to take home the hardware. You have to go all the way back to Danny Wuerffel (yes, Danny Wuerffel) to find a QB throwing more than 11 interceptions on the year, and still winning the Heisman trophy. For McSorley, interceptions have not really been his downfall (knock on wood), unlike some of his predecessors. However, with the pressure to produce at a higher level this season, he will need to keep it under control.

The Case for Penn State: Return to Pasadena

Finally, for Heisman voters to look in the direction of either Nittany Lion players, Penn State will need to return to the Rose Bowl, or even better, the National Championship. In 1962, the Big Ten started an official association with the Rose Bowl. Since that time, every Big Ten player that has won the Heisman Trophy, with the exception of one, have played in the Rose Bowl and/or the National Championship game. Winners win. And they certainly get the media’s attention, and that equals votes. 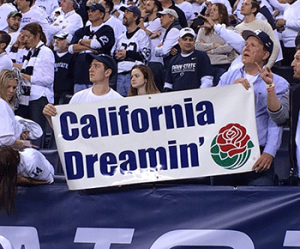 A return to the Rose Bowl , which is part of the College Football Playoff this season, is crucial to either Barkley or McSorley being considered for college football’s top individual prize.

PSU fans have not seen a 1-2 punch like Barkley and McSorley since the good ol’ days of Collins and Carter in ’94. But of all of the statistics listed above, neither member of the ’94 Lions achieved any of them, and they went home empty handed on Heisman night. Can Barkley or McSorley put up the statistics that it will take to win the Heisman Trophy? Absolutely! Recent history is not on the RB’s side, but it can be argued that he has less competition across the country at that position, and he is already well on his way to Heisman-caliber statistics. McSorley has a bigger hill to climb, but with steady improvement over the course of the season, there is no reason why #9 cannot be one of if not the best QB in the nation in 2017. And history has shown that if you do that, it might be time to follow up that home-run swing with a Heisman pose.