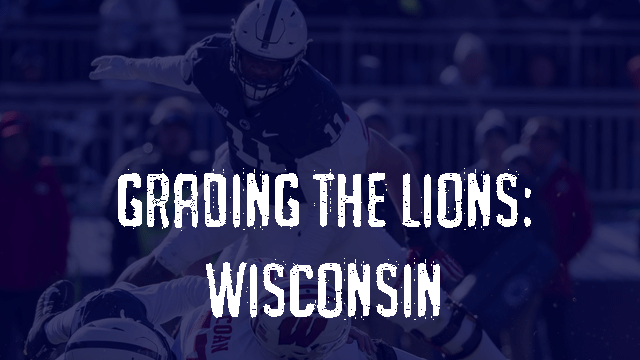 Saturday’s game between Penn State and Wisconsin seemed destined at the beginning of the season to be a national game with CFP implications. Uneven play and injuries have derailed each team’s season, so this weekend’s game appeared to be a footnote on the 2018 Big Ten conference schedule. The end result, a 22-10 win in which Penn State was never really threatened, saw an inept Badger passing game cover more Nittany Lion miscues and strange in-game coaching decisions. But Wisconsin is a good team, well coached and boasting one of the nations best running backs and offensive lines. After a long first quarter TD run by Wisconsin, the defense clamped down, allowing only 3 points the remainder of the game. Below are the grades for Penn State’s dominant win.

With the exception of the Michigan game (though the 42 points given up were not all this group’s fault), the defense has really become a strength of the team. Replacing nearly the entire starting defense from the 2017 Fiesta Bowl Championship team would surely lead to growing pains. But the Lions’ defense has started to find out who its playmakers are, and how to maximize its strengths and minimize its weaknesses. Wisconsin RB Jonathan Taylor is leading the nation in rushing, so he was going to get his yards behind a great line. But the defense minimized how much damage Taylor did after the lightning bolt 71-yard TD run early in the game. They gave up yards (over 200 for the team), but not points. Add to that 4 turnovers forced and 5 sacks, and the defense certainly did its job, making life utterly miserable for Wisconsin QB Jack Coan who had an anemic 2.3 QBR.

The special teams weren’t asked to do much, other than execute a fake punt, at which they were successful. The return game again didn’t add much, and P Blake Gillikin only averaged 38 yards per punt (none inside the 20), and K Jake Pinegar had an uneven day, going 3-5 on field goals and missing an extra point.

Thomas executed a 1-yard fake punt on a drive that pushed the lead to two scores.

After the poor effort against Michigan’s great defense, the Nittany Lion offense played pretty well against Wisconsin, leading in time of possession and having fewer turnovers. QB Trace McSorley reaggravated his leg injury, but stayed in the game to finish off the Badgers. RB Miles Sanders had a surprisingly good day (given the Badgers usually stout run defense), running for 159 yards with a nearly 7-YPC average. A theme, again, was that the offense could not put the punchless Badgers away. Penn State had a two-score lead (the precarious 12 points as they did against OSU), but another fumbled exchange on a read option gave Wisconsin life, albeit brief. WR Jahan Dotson has become the best receiver on the team, setting a nice combo with home-run threat WR KJ Hamler and requisite big TE Pat Freiermuth. Field goals needed to be touchdowns, and the score would reflect how truly outclassed Wisconsin was on this day. WR DeAndre Thompkins had a nice TD in the first quarter to quell the early momentum Wisconsin got from Taylor’s long run.

Inexplicable, inexcusable mental lapses continue to show up for this team. There is no reason fumbled exchanges should be happening on read-options in November. But Penn State’s defense adjusted to Taylor after the first drive of the game, and (save for a couple long runs aided by suspect tackling) they limited the damage Taylor did. OC Ricky Rahne orchestrated a drive to tie the game, which was critical to make sure Wisconsin couldn’t just bleed the clock down to keep them within a score. QB Jack Coan had a microscopic 2.5 QBR, and the passing game had no chance against DC Brent Pry’s aggressive linemen. It was for the coaches to keep the morale of the team high coming out of a soul-crushing loss in Ann Arbor, and they were up to the task. While not an elegant victory, they snuffed out the Badgers and set the team up for a decent (to good) NY6 Bowl.

As the weekend turned out, the Nittany Lions’ postseason hopes benefitted from not only their dominant 22-10 win over the Badgers, but also from five teams ranked above them losing. Penn State is through their gauntlet, going 1-3 against the Big Four from its schedule: Ohio State, Michigan State, Michigan, and Wisconsin. They should have won 3 of those, but that would have led to a bowl matchup that would be disastrous. It’s disappointing to lose such close games, but the team is in position for a Fiesta Bowl berth (rather unbelievably), against a team that would likely mark an upset opportunity. It would be a great way to push into 2019 if they win out against a quality Power 5 ranked bowl opponent. First thing’s first, though, an “away” scrimmage at Rutgers.