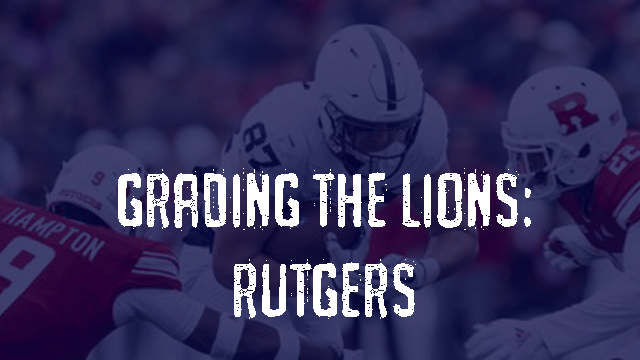 Penn State traveled to Piscataway to take on Rutgers, in a game that should have been a low-drama tune-up for its regular season finale on Senior Day against Maryland. Because Rutgers was the second-worst FBS team (rated ahead of only Oregon State), it was also a chance for the Lions to get QB Trace McSorley fully healthy and clicking with his receivers after the offense struggled to find rhythm against the Badgers last week. Instead, the offense never got going, with McSorley having a painful first half, frequently grossly missing receivers and RB Miles Sanders and the run game suffocated most of the game. In our season preview, we predicted a 38-20 win by the Nittany Lions, figuring that Rutgers would take a step forward but the offense would have no problem. As it turned out, a good game by the Penn State defense eventually made the difference in Penn State’s 20-7 win over the Scarlet Knights, in a game where both offenses struggled.

Rutgers has had a horrible offense all year, and this was again the case against Penn State. Knights’ starting QB Art Sitkowski had 18 yards and two bad interceptions. His replacement Giovanni Rescigno only had two completions. A non-existent passing game more than offset the 188 yards Rutgers had, and since it took so long for them to score, they never really had a chance to catch up. Penn State’s defense was aided by some self-inflicted wounds, like the dropped Philly Special that would have cut the lead to one score and the interceptions to CB John Reid and S Garrett Taylor. This was a good team effort, and Rutgers made things easy on DC Brent Pry’s group.

5 solo tackles, including 2 for loss with a sack, quantify the disruptive force Parsons was all game long. He was constantly in the backfield, and really looks the part of the next great Penn State linebacker. It’s only fitting that he chose to wear #11.

An uneven day by PR KJ Hamler, who appears to have taken the job away from DeAndre Thompkins. Hamler fumbled (then recovered) one punt, and miscalculated when to fair catch and when to return several others. K Jake Pinegar was perfect with 2 [each] short field goals extra points, and P Blake Gillikin put 3 punts inside the 20. Gillikin also had 3 touchbacks, which were huge kicks, but that could have pinned an inept Rutgers offense deep.

Gillikin still averaged nearly 50 yards on 6 punts on a day Penn State needed to flip the field due to its offense stalling.

QB Trace McSorley looked like he shouldn’t have been in the game in the first half, completing only 3 passes before the break. His decision making was suspect again, throwing inaccurate passes with room to run, and underthrowing many deep balls to covered receivers. I found myself thinking that either he has regressed this year, reminiscent of Christian Hackenberg, or he really benefitted by some talented players the past two years. He played [a little] better in the second half, but Penn State will lose to Maryland if the offense sputters like that next week. RB Miles Sanders was bottled up, averaging just over 3 yards a carry. WRs KJ Hamler and Jahan Dotson further cemented themselves as the team’s best receivers, going 1-2 in receptions and yards for the game. Fortunately, in a game of “almosts” for the offense, there was one player on that unit who made the key plays when the Lions needed them:

Friermuth appears to be ready to be the next great Penn State tight end. Freiermuth had 2 touchdowns and was a huge asset in the pass-blocking scheme, accounting for nearly all of Penn State’s margin of victory.

Credit the staff for sticking with McSorley after a bad first half, allowing him to win a record 30th game as Penn State’s starting QB. But he really appears to be regressing in his senior year, a very disturbing trend that also happened with 5-star recruit Christian Hackenberg. He constantly threw behind, over, or under his receivers, and the game could have been out of reach early with even a couple of those misses on target. Rutgers had the worst rushing defense in the country, and Penn State was not able to generate anything appreciable on the ground. An undisciplined first-half penalty by DE Shareef Miller extended a Rutgers drive, and the playcallers couldn’t seem to figure out how to close out the game AGAIN. Not good enough if this team somehow gets into a NY6 bowl.

At this point in the season, the team is who they are. Roles have been established, and the coaches know in whom they have confidence at critical moments, and in whom they do not. Penn State should have beaten Rutgers by 40, but they let the Knights hang around far too long. Lacking the killer instinct, the Lions promptly gave up a touchdown drive to Rutgers after pushing the lead to 20. The coordinators, especially OC Ricky Rahne, just haven’t been good enough this year with the talent they have. It is a young team, but it’s on the coaches to put the team in position to close out games. That is the only reason the team is 8-3 instead of 10-1, despite the fact that 8-3 seems generous based on the level of play they’ve shown the past 3 games. A solid win over a decent Maryland team, who will be fighting for a bowl bid and mad after losing a nail-biter to the Buckeyes, would go a long way toward inspiring confidence that they deserve a top-tier postseason game.