After an admiral performance against (arguable) the best team in the country, a season finale matchup against the hapless Rutgers Scarlet Knights seemed to be just what the doctor ordered for the Nittany Lions. It didn’t take long to see that Rutgers was willing to empty their tank in what was assured to be their last game of the year and their last game under interim coach Nunzio Campanile.

After a first half that had the Lion’s faithful biting their nails, Penn State settled down and was able to pull away for a comfortable 27-6 victory. The grades this week reflect the lackluster start and solid finish against Rutgers en route to a 10-win season.

Parsons ended this regular season the same way he began it, in dominate fashion! Micah has 10 tackles and 1 sack and brought the same level of chaos that opposing offenses have come to expect from him.

The defense receives a B+ grade for their “bend but not break” performance. The Scarlet Knights put up nearly 200 passing yards and won the time of possession battle. Fortunately, their efforts only resulted in two field goals.

Particularly in the first half, Brent Pry’s defense struggled with the rushing attack from Rutgers running back Isaih Pacheco. Couple this with a very slow start from the Will Levis-led offense and Penn State limped into halftime with a 7-3 lead.

The defensive unit buckled down on the ground game and were able to put Rutgers QB Johnny Langan on the turf with 3 key sacks. 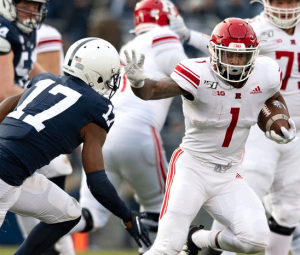 Rutgers saw some early success by running Isaih Pacheco against the Lions.

This unit gets anything less than an A+ only because of the blocked extra point from Jake Pinegar.

KJ Hamler saw a brilliant 50+ yard punt return called back to a 24 yard return due to stepping out of bounds while tight-roping the sidelines.

Blake Gillikin came through with another perfect performance, forcing an under-manned Rutgers offense to go the length of the field each possession.

Gillkin has been nothing short of spectacular all season. He pinned Rutgers deep 4 times on Saturday and forced their offense to go the distance each possession. 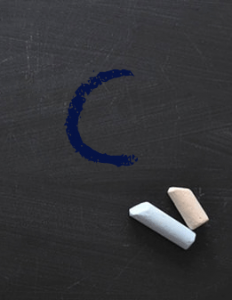 Brown built on his great performance last week with another 100 yard game against Rutgers. Brown made his home in the end zone with three touchdowns. It has become abundantly clear that the Lions will rely on Journey to carry the load moving forward.

With the Nittany Lions playing it safe with Sean Clifford’s injury, Will Levis got his first start.

While putting together a strong performance on the ground with 108 rushing yards, Levis’s passing game remains the concern. He went 8 for 14 for 81 yards and an ugly interception on an underthrown ball to Daniel George. His best throw came on a 44 yard touchdown strike to Jahan Dotson. 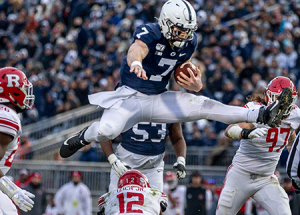 Backup quarterback Will Levis saw his first start against Rutgers and impressed with his legs.

It was running back Journey Brown who turned in the games best performance and sparked the offense to life in the second half with his gritty running style.

It was pretty obvious from the kickoff, Penn State was not taking this game as seriously as their opponents.

I put this on James Franklin and staff to not have the team prepared for a 2-9 Rutgers team with nothing to lose. After playing to essentailly a stalemate in the 1st half, a few adjustments were made and the better team prevailed.

Franklin will get high marks in the overall season performance, but his 1-0 this week mentality needs to echo louder against opponents we are favored to beat by 40+ points.

Before this season started, we predicted this would be a rebuilding year for the Nittany Lions.

Here we are 3 months later, with a 10-2 team and the very real possibility of a Rose Bowl birth.

This is a team that has proven they can play with everybody and with TE Pat Friermuth annoucing he will be returning next year there is plenty to be excited about as a Penn State fan. WE ARE!!!