Penn State had an extra day to get ready for Purdue on Homecoming weekend after the Friday night scrimmage against Maryland, and the Nittany Lions came out ready to go, jumping out to a 28-0 lead early in the second quarter. However, as expected as the 35-7 final score was (Vegas had the pregame line at PSU -28.5), the middle of the game was very strange, with the offense going very quiet, almost sleepwalking at times. In the end, the defense ensured Purdue didn’t get any closer than 3 touchdowns, and Penn State closed out the under matched (and injured) Boilermakers in the end. Though they haven’t played a good team yet, there’s a lot to like about the way these young Lions are progressing as they move to 5-0 on the year. Here are PSU Zone’s grades from Penn State’s dominant performance.

Toney led the Nittany Lions defense with 3 sacks. This game ball is a High-Achiever award as the entire defense had a great game, a credit to DC Brent Pry.

Through five games, the Nittany Lion defense, albeit against subpar competition, has allowed an average of a touchdown per game and surrendered only 37 total points. The defensive line is its usual chaos-inducing self, and the linebacker play has been refreshingly familiar after a few years below Penn State’s typical sky-high standard. It was a total team effort, as the Nittany Lions recorded 10 sacks and recovered a fumble, while holding Purdue to only 104 total yards, including -19 rushing yards (due to the sacks). Purdue only converted one 3rd down, as well. S Lamont Wade led the team in tackles, LB Micah Parsons had great game coming back after his early-exit for targeting against Maryland, and DE Yetur Gross-Matos added two more thunderous sacks. The only drawback was again the play of senior QB John Reid, whom each week appears to be more of a liability (and target for the opposition). He’ll have to elevate his play against the better teams in the conference. 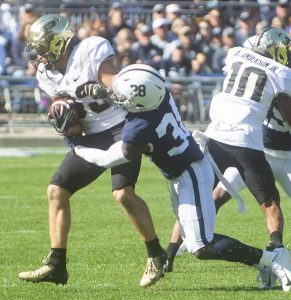 P Blake Gillikin had a decent day, averaging around 40 yards per punt, and the coverage team allowed nothing on kickoff and punt returns. However, K Jake Pinegar missed a short field goal, and the punt return team seems to have way too many adventures on Purdue’s 12 punts, low-lighted by Jonathan Sutherland touching a punt in front of PR KJ Hamler that led to a turnover. Hamler muffed catching a punt that nearly led to another turnover, and needs to do a better job of helping his coverage team know when to clear out of the way. Penn State won’t be able to count on its defense to continually bail it out of mistakes like that against most of its remaining opponents.

Gillikin had a 51-yarder and kept the struggling Boilermaker offense on its side of the field while Penn State’s offense struggled to get back on track in the second half.

This contest was a tale of two games by the offense; a 3-act play in which the actors didn’t show up for the middle one. Penn State came out guns blazing and raced out to a 28-0 lead early in the second quarter. However, when the Boilermakers broke a shutout streak that lasted nearly two full games by the defense, it seemed to shell-shock the offense into sleepwalking into a dry spell. The young skill players have to expect adversity and be ready to respond, though it’s good to have those experiences before the meat of the schedule to be able to recover. The Running Back Committee produced again, this time with Noah Cain leading the way with over 100 yards. WR Jahan Dotson had a 72-yard TD on a great read by QB Sean Clifford, and TE Pat Freiermuth added another TD. QB Will Levis underwhelmed again in mop-up duty. The coaches need to clean up his play if he’s called upon for an extended opportunity. RB Ricky Slade, who saw action early in the game, was ineffective. It stands to wonder how much longer the coaches will turn to him if the results continue not to come. 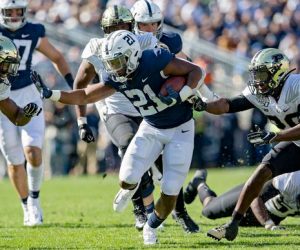 Cliff had another quality, efficient performance, as he tossed 3 more TDs on 264 yards with a completion percentage of nearly 70%. His interception looked more like Hamler’s fault than his, though the ball was slightly underthrown. As we predicted in our season preview, Clifford’s running ability creates opportunities in the passing game. It’s fun to watch the first-year starter grow into the offensive weapon the coaches knew he could become.

The coaches are doing a good job mitigating the weaknesses on the team and maximizing its strengths. The offensive line, though challenged, has not been much of a liability since the Pitt game. The Iowa defense will easily be its biggest test and will be charged up coming home after a 7-point loss to Michigan in a quintessentially “Iowa” style game.

HC James Franklin and staff need to realize four things, however: 1) RB Ricky Slade should not be part of the mix, but the other three running backs all should play 2) The team’s best and go-to receiver is Jahan Dotson, not KJ Hamler, 3) John Reid is a liability the way the defense is set up. He’ll need help on the opposition’s best receiver if he truly is the best option at cornerback, and 4) the punt return team needs work and could cost the team dearly moving forward.

As we predicted before the season, Penn State should be a top-10 team going into the Iowa game. The team is playing well and growing together, improving each game. As Penn State prepares to run the gauntlet of the schedule, which consists of Iowa, both Michigan schools, quietly-good undefeated Minnesota and Ohio State, there’s a lot to like about their chances in each of those games.