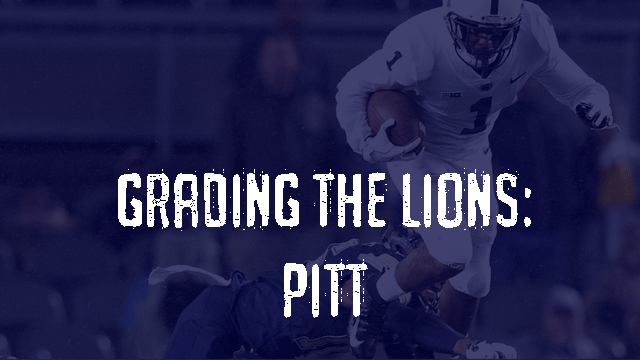 I have to admit, I felt nervous going into this game. Yes, Appalachian State is a tough opponent with which to open a season, but there were preseason concerns, mainly in the rushing game, that reared their heads in the opener. Pitt typically has good running backs, and Qadree Ollison ran up nearly 100 a year ago in Beaver Stadium against a much better defense. The prediction was 27-14, thinking it would be a little tougher on the road. What transpired was something no one expected. Penn State absolutely stomped Pitt, 51-6, but the young Lions still had some growing pains to learn from coming out of this one. Here are the grades for the prime-time, rain-soaked beat-down at Heinz Field.

Though Ollison eclipsed 100 yards, 63 game on one play. Without it, he averaged less than 3 yards per carry. 4 sacks and 3 forced turnovers gave the offense great opportunities to make plays. And on a night when Pitt seemed determined to get in their own way, the defense was happy to let them do it. CB Amani Oruwariye really stepped up, asserting himself as the best defender in the secondary. Micah Parsons also maximized his increased playing time, finishing the game tied for the team lead in tackles. The defense even registered points, drawing a holding call in the end zone with a 21-6 lead. Still, poor tackling remains a problem, and will really haunt them once Big Ten play begins against Ohio State. 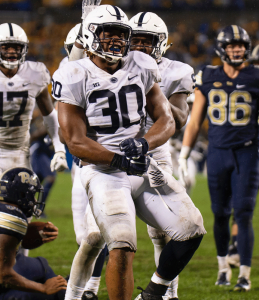 Givens tied Parsons with 7 total tackles and had 2 for loss. When a defensive lineman leads the team in tackles, not many plays are getting into the secondary.

On a tough night to kick and catch, the special teams seemed quiet, which is a good thing. K Jake Pinegar was perfect on extra points, and P Blake Gillikin gave the Nittany Lions great field position all night. Only one missed field goal, excellent field position, and a touchdown on a return make for a huge improvement to last week’s performance by this unit.

Thompkins had multiple dropped passes on offense, but has proven to be a real weapon on punt returns.

At first glance, a score of 51-6 would seem like the offense had no problem. But a close game at the half really got away from Pitt, as they totally imploded by the 4th quarter. RB Miles Sanders paced the offense with his first 100-yard game as a Nittany Lion, an achievement sort of lost in the flurry of second-half points. Dropped passes plagued passing game in the first half, albeit in lousy weather conditions, so it was great to see the running game’s effectiveness when the passing game was handcuffed. QB Trace McSorley had pedestrian statistics, completing less than half his passes at an average of under 5 yards per completion. But tossing 2 touchdowns in weather that makes his job very difficult offset the challenges in throwing the ball, along with the drops that worsened his numbers. McSorley’s leadership and steady, confident influence really seemed to help the young team navigate a hostile environment on the night of its Super Bowl.

KJ had one rushing and one receiving touchdown. More importantly, he represents a versatile wild card who will keep defenses on their heels.

Mostly great adjustments from the Appalachian State game. A mark of a young team is struggling with some of the fundamentals. A mark of a well-coached team is large improvements week-over-week in problem areas. Better secondary play, and nine different receivers with a catch were welcome improvements. But, dropped passes and poor/missed tackling remain issues that have to be fixed. It’s tough to evaluate due to the rain, as both those issues are made exponentially worse by slippery conditions that cause the players to change their approach. And I have no issue with Sean Clifford throwing a touchdown in the 4th. It reminded me of Mike McQueary’s throw against Rutgers in 1995 (Doug Graber game). Backups need game experience, and James Franklin knows there’s no credit for calling off the dogs in blowout wins anymore. The rankings and their weekly adjustments dictate what teams need to do to move up. 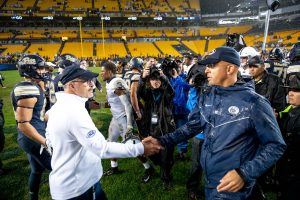 A silver lining might be some clarity in who the playmakers are on the rebuilt offense. WR Juwan Johnson entered the season the favorite to be QB Trace McSorley’s #1 target. Quickly, WR KJ Hamler and Brandon Polk, along with TE John Holland have emerged as clutch performers, gaining confidence with each game. With so many new faces on that side of the ball, the offense needs to be confident that the play called will be executed. McSorley will put the ball on target, but the receivers have to catch the ball. For fans who criticizing Franklin for running up the score, look only to Pitt making keychains of 42-39 and the coach’s inane Twitter rants. Pitt coach Pat Narduzzi tried to enflame this “rivalry” in the media, and James Franklin has quenched the fire with on-field domination, despite Narduzzi taking a much more measured approach this year. In the end, Penn State takes home a 45-point with on Pitt’s home field after the teams’ 99th meeting, and climbs back into the top 10. Fight On State, and Fail to Pitt.