In some ways, you could see Penn State’s loss in Columbus coming a mile away. So much talent on offense graduated, and Ohio State never seems to step backward. The Nittany Lions blew two consecutive games in 2017 & 2018 and should have ridden a 3-game win streak into Columbus. Even in the preseason, 17 points seemed about right, and we predicted the result to be right around the 19.5-point line when the game started for a 38-17 final.

On the other hand, it was the defense that seemed to be lacking entering the year, while offense would have to carry it. The game unfolded much differently, but despite a heroic effort by the defense, the Buckeyes scrapped out a 28-17 victory. Here is Penn State’s report card from the Rumpus in Columbus.

Wade turned in the best game of his career. The numbers: 8 solo tackles, 2 tackles for loss with 1 sack, and 1 fumble recovery. Wade played the type of game Penn State has been waiting for. Hopefully, this trend continues into next season.

With such an inspired effort by the entire defense, I want to give them an A. The Buckeyes walked up and down the field in the first half, though, and the defense gave up 417 total yards and could not solve Ohio State QB Justin Fields’ running on 3rd down. Still, they 3 forced turnovers, 1 in the first half that erased a second OSU touchdown, and 2 more that led to Penn State storming back in the 3rd, giving the Lions several chances to win. Though Buckeye RB JK Dobbins had 157 yards, he only averaged 4.4 yards/carry and was largely contained in the 2nd half. The secondary played its best game of the year, holding OSU WR KJ Hill to a game-high 46 yards. DE Yetur Gross-Matos had a resurgent performance with 2 sacks and was all over the field. 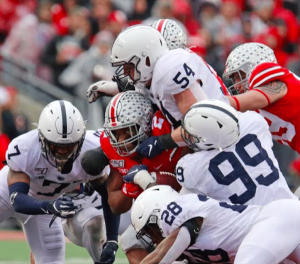 Despite racking up 157 yards, Buckeyes star running back JK Dobbins was largely contained in the second half by an inspired Nittany Lion defense led by DE Yetur Gross-Matos

Special teams have been a theme in this series, with the Block Heard Round the World from Marcus Allen/Grant Haley to Saquon running the opening kickoff back in 2017 (We’ve added the video below and suggest you watch it at least once a week). This time around, special teams were mostly quiet. K Jake Pinegar hit his only field goal, and P Blake Gillikin had an average game by his standards with a shorter-than-usual 34-yard average.

Another stifling effort by both kick and punt coverage, helping Penn State push the Buckeyes back just enough to limit the scoreboard damage. 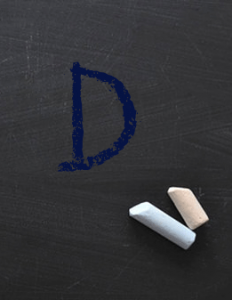 Journey Brown has all-of-a-sudden ended the RB committee approach. Coming off of 2 100-yard games, Brown had just 64 yards in this game, but ran with authority in the second half and had an electric touchdown run.

’m not going to hit the offense too hard for failing to block OSU DE Chase Young. Looking more and more like the first name that Roger Goodell will call in the 2020 NFL Draft, Young was berserk, setting the Buckeyes’ single-season record for sacks with 3 in this game. Penn State elected to block him with just LT Rasheed Walker. QB Sean Clifford had an uneven game, not getting much help from his receivers at all in the first half. WR Justin Shorter finally provided some help for leading pass-catchers WR KJ Hamler and TE Pat Freiermuth. The offense looked completely overmatched in the first half, and for a time it appeared it would never score. 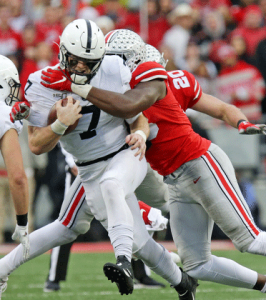 Backup QB Will Levis entered the game after an injury to Sean Clifford and provided a much-needed offensive spark that allowed the Lions to get back into the game.

The game turned after Clifford’s injury. QB Will Levis came in, playing with house money, and nearly led Penn State back from a 21-point hole. The performance reminded me of Pat Devlin in 2008, who entered the game when Darryl Clark went out with an injury and led Penn State to its second-most recent win at the Horseshoe. Levis and RB Journey Brown formed an effective 1-2 running tandem. Levis has a propensity to fumble, though, and put the ball on the ground twice in the game (losing neither). He also had a horrible interception while missing an open Hamler. It seemed Levis provided a shot in the arm that knocked the jitters off of the Nittany Lions and showed that they could play with Ohio State. The offense was just too tentative and had poor focus in the first half, and could not get off the field down only 7 with a 4th and 5 at its red zone, leading to the second OSU TD.

The preparation was good, for the most part. Penn State tightened up its secondary, and again adjusted well at halftime to close the gap. But HC James Franklin again coaches very conservatively in games he isn’t sure his team will win. Coupled with WRs dropping passes, it is the in-game playcalling that continues to hurt Penn State. The notable [read blatantly obvious] strategic error was only blocking Chase Young with one lineman. Rasheed Walker did admirably given an impossible task. The coaches had to give Walker some help after his first sack, but they failed to do so. They were not prepared for Justin Fields running, something they should have known would be part of Ohio State’s plan. Still, the play-callers had the Lions with the ball down 4 in the fourth quarter with a chance to win the game. No one has pushed Ohio State close to that hard this year, and the coaches kept the team’s spirit and effort level up the entire game. 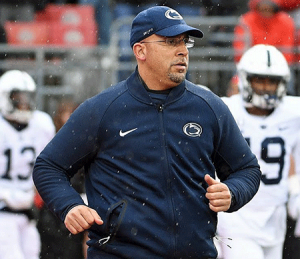 Penn State HC James Franklin seemed to have the Lions prepared for Ohio State but continues to call a conservative game against quality opponents.

Franklin talked last year about the team being great, but not yet elite. He also uses the Ohio State game as a measuring stick for his teams each year. The success Franklin has brought back to Penn State makes it fair to use the entire Ohio State program as a measuring stick for Penn State’s. The Buckeyes are the top of the mountain; they reload and annually pump out talent to the upper tier of the NFL. Penn State lost a ton of talent, and counterpunched Ohio State time after time, shaking its best players and forcing highly uncharacteristic turnovers. Though the outcome of the game might have been a foregone conclusion, the optics of how it transpired gives us as fans much hope for the immediate future. Penn State will steamroll Rutgers and play in a good bowl against a good, ranked team. Just as the 1993 team lost games to Michigan and Ohio State that everyone saw coming, the team found themselves along the way and used the bowl game as a springboard into 1994. That team was certainly elite, and the talent and heart this team showed are reasons to believe the 2020 edition of Penn State can be as well.