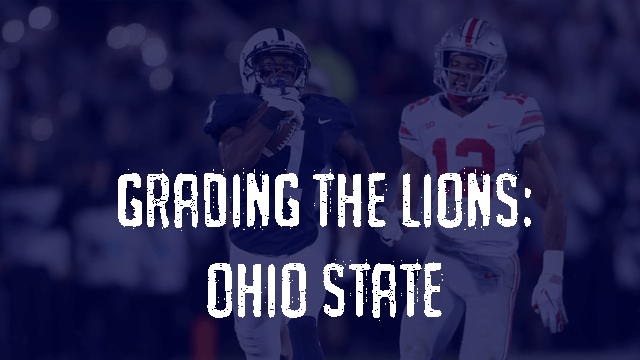 Another game for the ages in unquestionably the best matchup in the Big Ten. But again, the Nittany Lions come up short against the Buckeyes. There were so many storylines, ebbs and flows of the game, and significant inflection point moments. We thought the game would be 20-10 Penn State, and it very nearly (and should have) ended 26-12 in favor of the Lions. But the trend in big games reared its head again, when as soon as breathing room is achieved, the collective exhale allows the opponent to overcome the deficit. A gritty, historic effort by a gritty, historic quarterback was wasted, with the record White Out crowd of 110,889 left to wonder, once again, what if. Too many polar performances for overall offense, defense and special teams, so our grades are position-by-position.

The run defense was suspect coming into the year, and through the first 4 games this was the case. Illinois ran up 245 yards, and we know how much better the Buckeyes are up front than the Illini. But the defense line put up an inspired effort, limiting Ohio State to 119 rushing yards. Their game plan to disrupt Dwayne Haskins was executed perfectly, until he was able to complete the screen late in the 4th quarter.

The reason we need to split up defensive grades is that the secondary had a lackluster game. CB John Reid had a nice game going in the first half, but missed a key tackles on the go-ahead OSU score in the 4th. There is no excuse for WR Binjimen Victor to have scored on the 47-yard pass late in the game. Missed tackles, poor execution and lousy effort allowed the play to happen, where a stop where he caught the ball likely dramatically changes the outcome of the game. Tariq Castro-Fields had an especially tough second half. Still, Dwayne Haskins, Superman through the first third of the year, had a Clark Kent game with a 33.6 QBR. 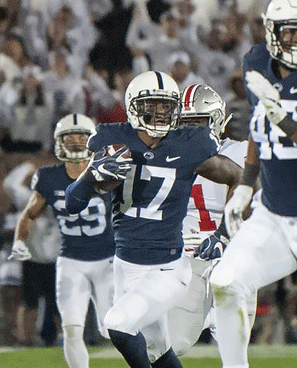 Taylor who had the game’s only interception to set the tone for Haskins’s tough night.

Special teams didn’t create a direct game-defining splash play, as the prior two years’ games had seen. But an early missed 46-yard field goal by K Jake Pinegar may have given the coaching staff pause to try another when Penn State trailed by 1, 14-13. They opted for a 4th down try with a yard to go, instead of a 41-yard field goal. Easy to second guess at 4th and 1, but early in the game it would have been better to take the points and regain the lead. You absolutely have to have points after Ohio State marched down the field to take their first lead. P Blake Gillikin could have performed much better in the first half, leading to a wider lead in a half in which the Lions dominated everywhere but the scoreboard.

Checa did not allow an Ohio State kick return.

QB Trace McSorley had a game for the ages, tallying the most total yards in Penn State history. In the second half, he willed his team from a point down to 12 points ahead, and later engineered a drive nearly by himself to reach the Ohio State 45. While he was not his most accurate, especially from the pocket, his leadership, drive and running ability put Penn State in a position to win. And if the ball weren’t taken out of his hands on the finaloffensive play, we might be writing a much different story of this game. 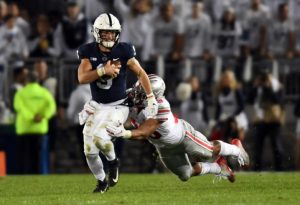 Trace McSorley did all he could to prevent the Ohio State comeback – unfortunately, one man can’t do it all.

RB Miles Sanders, coming off of a 200-yard performance at Illinois, was totally shut down. This is only partially his fault, as clearly the Buckeyes were determined to stop him, just as they did Saquon Barkley in 2017. But the offensive line was clearing the way for McSorley, and Sanders continually slipped trying to cut. He has to adjust his running style for the field conditions. His critical fumble on the Penn State 25-yard line gave the Buckeyes life, and allowed them to enter halftime down only 6. He’s got to take better care of the football in that situation, an issue that plagued him in years past. I’d leave the #8 Mark Allen jersey in the locker room from now on. RB (QB) Tommy Stevens, in his first action of the year, had three unfortunate rushing attempts before the plug was pulled on his package.

The line put forth a valiant effort, producing a 286-yard passer and a 175-yard rusher (that just happened to be the same guy). But the inability to get Sanders going made the offense clunky in the first half, leaving points on the field on multiple occasions. The line blocked no one on the 4th and 5 play at the end of the game, and Sanders never had a chance.

WR Juwan Johnson is developing a habit for making the big play (an OBJ one-hander we’ll see highlights of for years) and botching the simple ones. He again had multiple drops, that could have made his 61-yard game much better. WR Brandon Polk had another very ill-timed drop, snuffing out a drive. WR KJ Hamler had an electric 93-yard touchdown, but without that there wasn’t much to speak of in the passing game in the first half. TE Pat Freiermuth had a Gronkowski-like TD catch in the second half, and appears to be poised for a great career with the Lions.

If only he had 20 years of eligibility left.

This is a hard one, especially after the 4th down playcall to end the game. James Franklin and his staff devised a game plan to shut down the nation’s second most electric QB, which for the most part worked exactly to plan. The defensive pressure threw Haskins off, allowing the Lions to build a lead and keep Nittany Nation rocking. OSU predictably (and far too late in my view) went to screen passes to back the blitz off, and there was no answer. At halftime, that adjustment had to be expected by the Lions’ coaches, but it seemed to catch them off guard and they had no response. The 2017 game should have given some clues as to how they planned to shut down a great running back, yet they couldn’t get Miles Sanders going. And lastly, with another double-digit 4th quarter lead, they couldn’t close out. I have to say it: the 4th and 5 run play to Sanders was the most obvious, no-chance-in-heck-of-working play they could have picked. There was no evidence it would be successful, even if they ran that play 50 more times.

Perhaps Franklin and staff are not as far away as some might think. Looking at the graphs below, the 3 big games in which Penn State has blown double-digit leads late, some encouraging trends are evident.

In the Rose Bowl, USC build the lead, only to have Penn State come back. If Saquon Barkley converts a 3rd and 4, the Lions are Rose Bowl champions after starting 2-2. The 2017 OSU game saw Penn State start out much more confidently than they did in the Rose Bowl, jumping out to a 28-10 first-half lead and taking a 15-point lead into the 4th in a game they had dominated. The decision to go into a zone allowed Barrett to bring the Buckeyes back, something the Lions did again in this year’s OSU game. But it was still a more aggressive zone than a year ago. Cleaning up missed tackles on defense would have done it this year.

So lessons have clearly been learned, and it’s a matter of execution by a young team. Franklin will undoubtedly make good on his promise to close games out better, and it’s exciting to see where the team will be in the years to come. 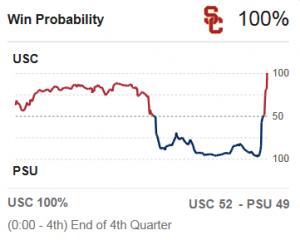 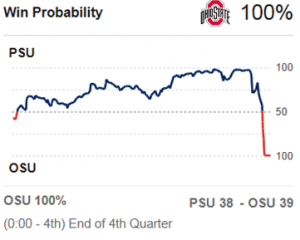 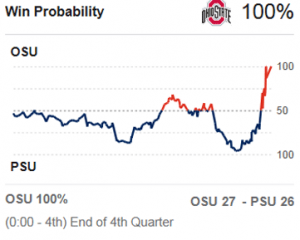