After a bye week that should have given Penn State ample time to prepare for Minnesota’s offense and add wrinkles in its offense, the Nittany Lions came out and played a completely uninspired first half that featured 3 turnovers, and could never catch Minnesota. In our season preview, I predicted that the Golden Gophers would win 34-29, but said that I’d rather Penn State play in Minneapolis than at Nebraska, which is a joke.

Minnesota, to its credit, finally seems to have taken a step forward under head coach P.J. Fleck. Though the Lions made way too many mistakes, you have to tip your cap to Fleck and the upstart Gophers, who earned a well-deserved victory. For Penn State, the season is by no means a total loss, but the big goals it had this past week have now become much harder to realize. Here are the grades from Penn State’s heartbreaking 31-26 loss.

Parsons tied for the team lead in tackles (11) and registered the Nittany Lions’ only sack to give the offense a chance to win it. 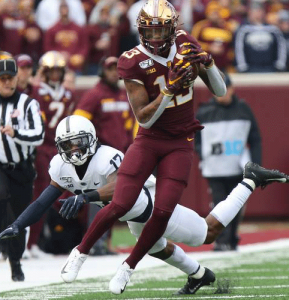 Star Gopher receiver Rashod Bateman carved the Nittany Lion secondary up for 203 yards and a touchdown.

The secondary, which all year has given up its share of big plays, was torched by Minnesota QB Tanner Morgan, who threw was 18-20 for 339 yards and 3 TDs. Rashod Bateman terrorized Penn State’s defensive backfield with 203 yards, and his 66-yard score set the tone for how the day would go. CB John Reid has had a terrible year and was again exposed by receivers that seem to be several steps ahead all day. Reid panics and grabs, instead of trying to get in position and play the ball. His pass interference penalty that extended Minnesota’s drive on 3rd and long deep in its territory was inexcusable. The defense also had far too many missed tackles early in the game, leading to Minnesota points.

Still, DC Brent Pry tightened up everything else in the second half, holding the explosive Gopher offense to only 7 second-half points. The pass rushers were more effective, finally sacking Morgan in the second half. As bad as the numbers looked against the unit, it was not the defense that cost Penn State the victory. DE Shaka Toney’s fumble recovery kick-started the offense in the third quarter, giving it a turnover it desperately needed at that point in the game.

You know it’s a tough day when KR KJ Hamler has 5 kickoff returns. The special teams didn’t have much of an impact. K Jake Pinegar was 2/2 on both extra points and field goals, and the coverage unit held Minnesota KR/PR to 12 total yards in returns. The field was just tilted in Minnesota’s favor all day.

It would have been interesting to see the playcalling had Penn State kicked the extra point when it pulled to within 24-19. Assuming Minnesota scores to make it 31-20, kicking a field goal instead of failing on 4th and goal puts it at a one-score deficit. Easy for me to say, but it’s worth questioning for when the coaches look at the film. 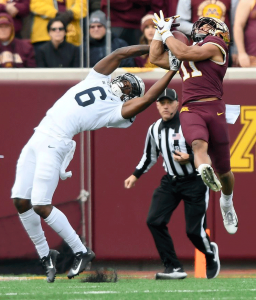 This is a tough group to grade in aggregate. QB Sean Clifford had a Jekyll and Hyde performance, throwing 2 interceptions in the first half and a crucial one to effectively end the game in the 4th quarter. Clifford, only a sophomore, actually threw for more yards than Morgan, but at a completion percentage again near 50%. He missed a wide-open TE Pat Freimuth in the first half that would have been a sure game-tying touchdown and was bitten all day by dropped passed by WRs Daniel George and Justin Shorter. WR KJ Hamler and Pat Freiermuth proved to be the only reliable options, with clutch catches to extend drives. TE Nick Bowers caught a touchdown, and WR Jahan Dotson, underwhelming all year, had a critical 49-yard gain late in the game. Clifford must receive credit for fighting through cramps and bringing Penn State back to have a chance to win the game late, even though it ended in heartbreak.

Brown ran for 124 yards and 2 TDs on just under 9 yards/carry. Just as it looked like RB Noah Cain had emerged as the preferred option at running back, Brown comes up with a huge game to assert himself as deserving of first-team reps.

I had to rewrite this, as the first version wasn’t appropriate. The Nittany Lions had an extra week to prepare for Minnesota. The Gophers came out and did exactly what the coaches knew they would do and looked lost in the first half. Simple slants and crossing routes baffled the linebackers, and multiple pass interference penalties (including an offense PI that essentially killed the final drive on a Journey Brown catch-and-run to the 2-yard line), poor tackling, and missed assignments plagued the secondary. Multiple dropped passes have been the story of the seasons of WRs Daniel George and Justin Shorter, whom the coaches thought would have a breakout game against the Gophers.

The worst part of the coaching in this game, though, was the playcalling in the red zone. For some reason, TE Pat Freiermuth was not targeted, in favor of fade after fade to 5’9” WR KJ Hamler. Despite being dominated in the first half, Penn State found itself in a chance to win, with a first and 10 at the Minnesota 11 yard line. Self-inflicted penalties and another interception on the final drive were emblematic of the entire game. 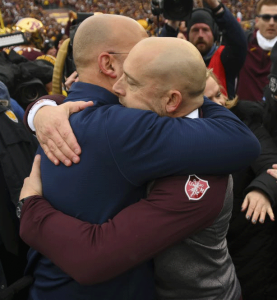 Too many dropped passes, and too many turnovers were the story of this game. The secondary was confused, and offensive playcalling and execution (except for Hamler, Brown, and Freiermuth) was abysmal. The receivers continue to drop passes, and the red zone playcalling made no sense. If Penn State wants to make the Rose Bowl, the coaches need to learn from this game, which was available late, and tighten things up. Instead of a 1994 Illinois-type drive to win the game, the dream of an undefeated season slipped away in a sea of maroon and gold in a game Penn State should have won. The bottom line is that this was an unacceptable coaching job with a bye week and everything in front of the team entering November.