This was the hardest game to gauge entering the season. Penn State should have entered 2019 with a 3-game Land Grant trophy-winning streak, but the Spartans stole games in 2017 (lightening delay game) and 2018 (final-drive MSU comeback) that derailed the Nittany Lions’ postseason hopes. My conclusion was that due to two fourth-quarter comebacks, James Franklin was outcoached by Mark Dantonio. This meant that it was imperative for Penn State to get a big early lead to have a chance to win.

This year’s game delivered that result, with Penn State taking a 21-0 lead into halftime against a Michigan State team that [until the second half] looked like it might never score again. Though the Lions’ offense again stalled in the second half of a game with increasing downpours, the defense suffocated the Spartan offense and would let them get no closer than the halftime deficit. Here are the grades from Penn State’s dominant 28-7 win.

The redshirt freshman had 3 tackles, 2 sacks, and a forced fumble in a disruptive performance. DE Yetur Gross-Matos and DT Robert Windsor had quiet games, but Oweh continued the stellar play of the defensive line in 2019. 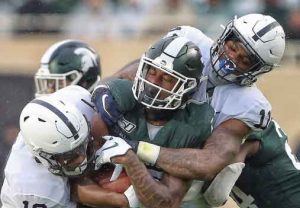 By halftime of the game, Michigan State’s offense had gone 8 quarters without scoring. And in another PSU-MSU game with weather issues, this time rain, protecting a lead was paramount to winning. The Lions’ defense continued its dominant play, terrorizing (and ultimately chasing) QB Brad Lewerke and accounting for 4 turnovers while limiting the Spartans to 265 total yards. LB Micah Parsons displayed the lateral range that likens comparisons to LaVar Arrington, leading the Nittany Lions with 12 tackles. CB Lamont Wade had another solid performance, and the linebackers held RB Elijah Collins to 53 yards. S Jaquan Brisker had a nice return on a late interception, partially negated by a bonehead celebration penalty. 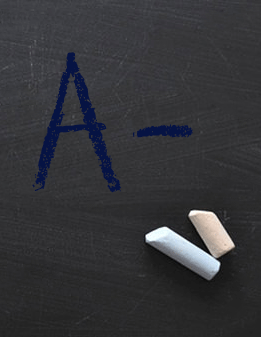 DE Shaka Toney blocked an early field goal with his helmet, and WR Dan Chisena atoned for a wide-open TD drop with a fumble recovery that led to a Penn State TD.  A missed extra point by K Jake Pinegar can be partially excused by the lousy weather, and there was not much help from the return game. Rainy games have increased risk of a special teams gaffe tipping the scale, but Penn State had a clean game overall, and the special teams unit kept the field position in Penn State’s favor all day.

Gillikin is excellent at his craft, and tactfully pinned Michigan State inside its 10 twice, almost a third time. With the Spartan offense struggling all day (and year), making MSU go 90 yards is a nearly impossible feat. 8 punts for an average of 44.3 yards amounts to a great day for most, but another day at the office for Gillikin. 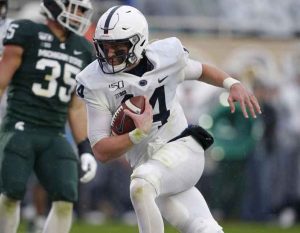 I didn’t think the offense could absorb the losses it did and still be competitive. The offense is getting better each and every week, led by its leader, QB Sean Clifford. The running back-by-committee didn’t seem to get closer to a solution, with RB Noah Cain starting but RB Journey Brown leading the team in yards. WR KJ Hamler played very well in his Michigan homecoming, with a touchdown and nearly 60 yards receiving. Clifford had a clean day, throwing 1 incerception but otherwise taking care of the ball. His 4 TDs (on only 189 yards) would normally be game-ball worth, unless 3 of the TDs went to the same player…

Freiermuth’s 3 TDs ties him with TE Mike Gesicki for the CAREER mark for touchdowns by a Penn State tight end…as a SOPHOMORE. Feriermuth is Gronk-like, bull-rushing his way into the endzone for the second touchdown. He is a great route-runner, solid blocker, and has the measurables and intelligence to be an elite NFL tight end.

This is a hard one to grade. The game plan was good, and HC James Franklin had his team ready to jump out early and keep the Spartans at arm’s length the entire game. The offense, however stalled in the second half again. This time, the driving rain could be attributed to the slow-down in scoring. Over 100 yards of penalties for the second-straight road game is not a good sign heading into Columbus next month, and the offense couldn’t countermove MSU’s defensive adjustments after halftime. Two unsportsmanlike conduct penalties and one ejection were maddening, and something Franklin must and will tighten up over the bye week. I can only imagine what Joe Paterno would have done had a player spit on an opponent…still, Franklin and his staff devised a great strategy and executed it well, throttling Michigan State and seeming to break the Spartan’s will by game’s end. 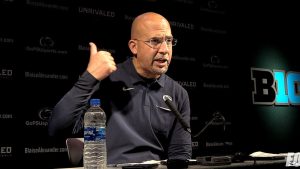 Penn State Head Coach James Franklin was pleased with the overall performance against Michigan State, but made it clear in his post-game press conference the two late unsportsmanlike penalties are “not who we are”

Georgia, Wisconsin, and now Oklahoma fell to unranked teams in consecutive weeks, as Penn State happily moves into the top five. The Nittany Lions control their destiny to make the CFP, with the small matters of beating the Buckeyes in Columbus and Minnesota twice in their way. The great news for Penn State is that even should they lose to Ohio State, they will likely win the remainder and head to Pasedena, something I never foresaw heading into a year I thought would end at 7-5. I did call Minnesota being 8-0 entering November, but the lack of good competition will limit their effectiveness against battle-tested Penn State. 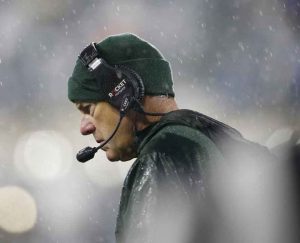 Longtime Michigan State head coach Mark Dantonio has found himself in the midst of a tough season with many of the Spartan faithful calling for him to be ousted.

It’s sad to see what’s happened to Mark Dantonio in East Lansing, as whispers now become out-loud calls for him to be replaced after becoming 1 of only 6 Big Ten coaches with six 10-win seasons. It reminds me of the doldrums of Joe Paterno’s 2000-2004 years. Dantonio is a good coach and a loyal guy. However, he needs to realize his assistants have let him down in recent years, and need to be held accountable.