After 3 underwhelming performances in its last 4 halves of offensive football, Penn State’s bye week came at a convenient time. Plenty of questions surrounded first-year starting QB Sean Clifford, the young skill players, and new offensive linemen. Maryland, needing a win following a stunning upset at Temple, caught Penn State on a Friday night at home. The Terrapins instituted a “Black Out,” and the university canceled classes Friday afternoon to prepare for the war that was to ensue.

The Terps would be mad; Penn State has offensive questions. No less a football mind than Matt Leinert predicted Maryland would win the game. Well, that’s why they play the games. Penn State obliterated Maryland 59-0 in a game as dominant as the score indicates. Offensive precision paired with defensive suffocation derailed Maryland’s gameplan before it got off the ground. Here are the grades from a glorious night in College Park, aka Happy Valley South. It was a night that Penn State fans hoped would never end.

Johnson single-handedly silenced the [only half-Maryland] crowd with his first-quarter interception. In a game with so much emotion for the home team, that play and subsequent touchdown [forgive me] shell-shocked the Terrapins, and they never recovered.

LB Jan Johnson intercepted Maryland QB Josh Jackson on the first series, setting Clifford for a TD run on the next play. Brent Pry’s unit took over the game from there, limiting Jackson to 65 yards, intercepting him twice, and recovering a fumble late in the game. Very early in this game, Jackson’s spirit seemed to break, and the air went out of the collective Maryland balloon. DL Yetur Gross-Matos was a one-man wrecking crew, and the LBs completely shut down Maryland RB Anthony McFarland Jr., who terrorized Ohio State a year ago and nearly led them to an OT victory. 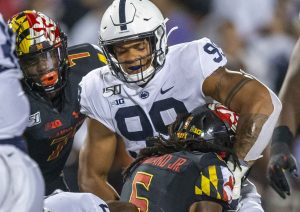 When your team’s punter doesn’t see the field until 3.5 minutes left in the 3rd quarter, and your opponent has 3 times as many punting yards as offensive total yards, you know the game went your way. Splitting hairs now, K Jake Pinegar was perfect again, but K Jordan Stout missed a 52-yard field goal badly.

Dotson had a nice 30-yard punt return in the second half, and there’s a great comfort to the coaches to know that their punt returners catch the ball every time.

What a difference 2 weeks (and another game) makes. Pitt’s defensive line looked good against Penn State in the Lions’ last game, and they stunned UCF in Heinz Field last week. However, on this night, Penn State’s offense could score against the other defense that plays in Heinz Field. WR KJ Hamler had a great game, led by his 58-yard touchdown on 108 receiving yards. RB Journey Brown took another step forward as he is emerging as the starting RB. With all the skilled players on the team, leaders must emerge. 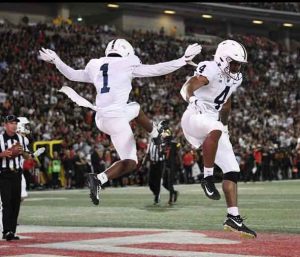 Clifford finally looked comfortable. He threw for nearly 400 yards and 3 TDs against 5 total incompletions. It was a coming-out party of sorts for Clifford.

It was clear at the outset that HC James Franklin and the coaches modified the gameplan for this game. It worked to perfection, and underscores the importance of starting fast, especially on the road,

The Nittany Lions are 1-0 in conference play and heading home to play Purdue at Beaver Stadium. It seems James Franklin and his staff are improving, having made successful in-game adjustments against Buffalo and Pitt and devised a perfect plan for Maryland. It was also clear Franklin wanted this game bad, and he masterfully performed the art of blowing a team out without making it seem like he was running up the score. If this is how Friday night games are going to go, maybe they’re not so bad after all.