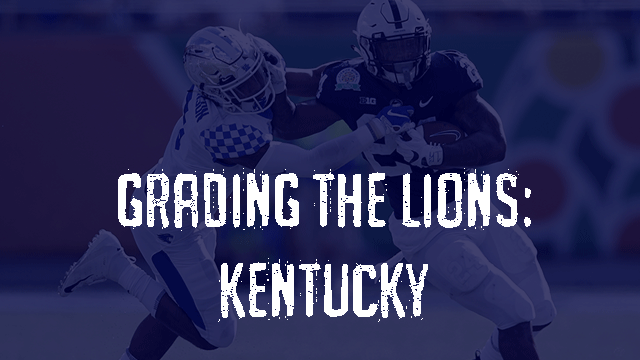 A season that began with much promise, with a returning senior quarterback and stable of capable receivers, eroded into a forgettable rebuilding year, with the immense first-round NFL talent of the past two years unable to be immediately replaced. Growing pains plagued the team throughout the year, with dropped passes and missed tackles recurring themes in nearly every game. Still, a favorable schedule had the Lions in position for a NY6 bowl, until the powers that be somehow deemed Texas a more deserving option. A respectable Citrus Bowl bid against upstart Kentucky did feel more appropriate for a team without a marquee win and a penchant for coming up just short in the biggest moments. “Close but no cigar” was the theme for the year, and would ultimately be the theme against the Wildcats. The Lions’ comeback bid came up just short, 27-24, against a team who certainly had more to gain with a win than Penn State did. Below are the grades for the Citrus Bowl.

The defense knew the key to beating Kentucky would be stopping RB Benny Snell, who ended the game as the leading rusher in Wildcat history. Snell had 144 yards and averaged 5.5 yards per carry, and had a big second half to break the game open with a big run to push the lead to 10. His second rushing touchdown would extend the lead to 20 at 27-7, and the game looked out of hand. To be fair, the defense played great in the first half, and atoned for multiple special teams gaffes and an anemic, out-of-sync offense. But the defense’s lapse right after halftime let Kentucky walk down the field, and couldn’t get off the field at the end of the game when the offense had pulled to within 3 with 4 minutes left and all 3 timeouts. Good, but not good enough, as it turned out, as it couldn’t stop the one dimension Kentucky’s offense had. 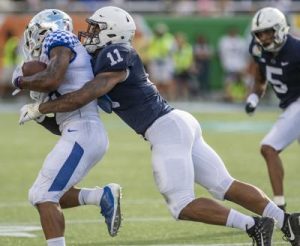 Parsons led the team in tackles and was all over the field. He looked every bit the next great linebacker at Linebacker U. Honorable mention to DT Kevin Givens, who added two sacks.

This group cost Penn State game. A failed fake punt on the game’s first series allowed Kentucky to score the 3 points that represented the margin of victory. Two bad missed field goals by K Jake Pinegar left 6 points on the field, Kentucky took a lead they never relinquished on a punt return in which P Blake Gillikin outkicked his coverage. I can’t understand why it has become so difficult for Penn State to find a reliable field goal kicker, but that has been a huge Achilles’ Heel for James Franklin’s teams. Pinegar must improve.

He helped the Lions’ field position in the first half (save the punt return TD), had a 71-yard punt and pinned the Wildcats inside their 20 twice, once being inside the 5.

The offense was totally out of rhythm in the first half, with QB Trace McSorley having another period of time when he looked astonishingly inaccurate, including a bad interception thrown into double coverage. WR DeAndre Thompkins, who led the team in receiving, had a lost fumble and a critical drop of a pass by QB Sean Clifford, who briefly filled in for McSorley when he went out with a lower body injury. Had Thompkins caught that ball, the entire complexion of the game changes. TEs Pat Friermuth and Nick Bowers each had a touchdown catch, but RB Miles Sanders underwhelmed again. The notion that he would enter the draft seems ridiculous, at this point. Still, McSorley got his team up off the mat to pull within 3 with a heroic performance in his last game at Penn State. It is a shame the team got so far behind, as sending off their record-setting QB would have been a fitting end to a great career. It would have been interesting to see whether McSorley could have converted the fourth and 6 at the end of the game to give his team the lead. 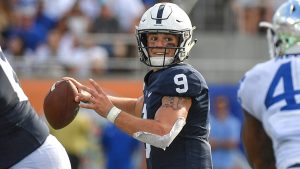 Trace had over 300 total yards and led the team in rushing. Accuracy has been an issue this year and was again in this game, but McSorley is simply a winner who refuses to quit even when he’s not at his best. His receivers really let him down this year, with the exception of WR KJ Hamler and the TEs. The plethora of drops affected his delivery and confidence in throw placement, and the results showed.

It is very frustrating that James Franklin continues to be out-adjusted after halftime. You knew Kentucky would try to get Benny Snell the ball more, and they promptly come out and run right down Penn State’s throat. The fake punt, while refreshingly aggressive, was ill-timed and at the wrong part of the field. The field goal at the end of the game was probably the right call at the time, but seeing the way the offense was moving and the way the kicker had played so far, the playcalling on the entire last plays on that series was questionable. The position coaches, especially the receivers and special teams, did not develop their groups enough throughout the year. That many dropped passes are intolerable this time of year, and the punt coverage continued to be poor. Execution, player development, playcalling, and in-game adjustments all have to be improved for the team to get where it wants to go.

A disappointing result to a forgettable year, as the Lions drop their bowl game for the third time in the last 4 tries. They’ll enter the offseason set to lose by far their most proactive player and leader in Trace McSorley. I don’t think it is, or should be, a forgone conclusion that Tommy Stevens be handed the reigns to the offense next year. He’ll be the front-runner, but Sean Clifford has shown flashes of greatness and had a big, accurate arm. The offensive line will be depleted again, possibly losing two starters to the draft. The defense will have to re-tool as well, especially the secondary, but that unit had room for improvement anyway. The recruiters should also target bigger-bodied players. Small, fast players struggle in the Big Ten, and that seems to be big reason they have a hard time holding off Ohio State. Their larger, stronger athletes wear the smaller players down late in the game. The players and coaches will all have to take a big step forward next season, in both performance and leadership, if this great team is to become elite.