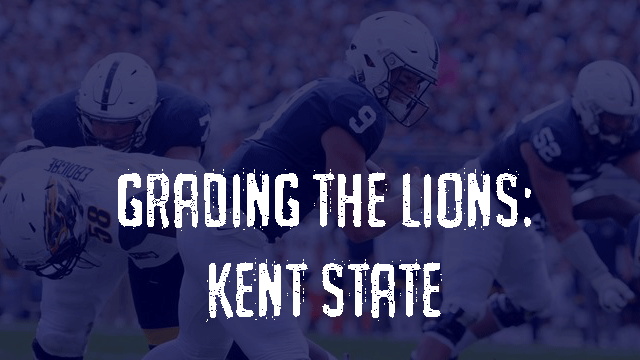 Games like this year’s Kent State are a different kind of fun for the fans. Somewhere in the 100,000 fans, a son experienced his first sun-soaked afternoon in Beaver Stadium with his father. Tailgates are in full swing in the RV lot, and chants of “We Are” echo across Happy Valley as strangers hi-five and smile at each other. And if you don’t rush to the Creamery line immediately after the game, good luck getting served before nightfall. It’s a great reminder, before the games begin to matter so much, what a transcendent experience a Penn State football Saturday really is.

Clearly, the Golden Flashes had no real chance to win, despite their spirited first-half performance, complete with a very early *and successful* onside kick. We predicted a Penn State win 37-3, just under the game-time line of 35.0. And while the Lions were even more dominant than expected in the 63-10 win, in the end, there was little surprise.

The secondary, though burned for an early long touchdown, is the group most improving week over week. They are given increased confidence to plan man coverage, and they are rising to the challenge, led by Amani Oruwariye. Shareef Miller is quickly becoming the key to the defense this year. Since Tamba Hali and friends in 2005, the defensive line has long been a position of strength for Penn State. Miller is an excellent sack master, and disrupting potent offenses will be crucial once conference season starts.

Special teams were again strong for Penn State, with K Jake Pinegar perfect on extra points while not attempting a field goal. Consistent punt and kick returns by DeAndre Thompkins and KJ Hamler gave the Lions good field position all day. The only slight point of improvement might be downing punts inside the 20. P Blake Gillikin is a legitimate weapon, the he had the chance to pin Kent State deep in the second half. The coverage unit wasn’t in place, and the ball went into the end zone for a touch back. Downing the ball inside the 10 on that play could make a huge difference when Ohio State comes to town.

Hamler (I swear there are 3 of him) contributes in many ways each week. His 52-yard kick return and video game-like 33-yard punt return were hidden yards in a dominant performance.

Good weather favors the better team, and a gorgeous day in Beaver Stadium let Penn State offense stretch its muscles. WR DeAndre Thompkins made up for several drops against Pitt with over 100 receiving yards and the game’s first touchdown. RB Miles Sanders is really finding his groove, and his running style really compliments the passing game. Sanders had a lot of positive runs after being hit behind the line, and averaged over 6 yards/carry. It would have been nice for him to hit 100 yards, but RB Mark Allen provided a nicer 1-2 punch for Sanders with nearly 70 yards on his own. I wonder if OC Ricky Rahne is still sorting out his TE, as both four-star true freshmen Pat Freiermuth and Zack Kuntz each had at least a catch. QB Sean Clifford, in mop-up duty, had a PSU record 95-yard touchdown pass to WR Daniel George. He played well again, maybe putting into question QB Tommy Stevens’s stranglehold on the starting job in 2019(?) That should cover the offense unless there’s someone we forgot… 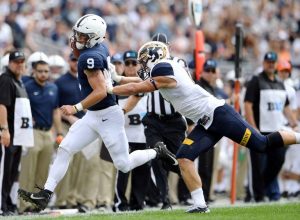 #9 captured more records and milestones in this game. McSorley eclipsed 1000 career rushing yards as a QB, putting him only around 600 short of Michael Robinson’s career total. He also broke Darryl Clark’s record for Penn State QB career rushing touchdowns, with McSorley running 3 in against Kent State. Trace has also really improved his accuracy, throwing long TD passes to DeAndre Thompkins and Brandon Polk. His completion percentage (and lone interception) were the result of drops. The only area McSorley should look to improve is forcing himself not to telegraph his passes. He’s become accurate enough to put the ball wherever he needs to, but looking off safeties will be critical against a secondary as talented as Ohio State’s. That’s splitting hairs, though. McSorley is the key for this season. His health, decision-making and leadership will take this team as far as it can go, and he played a tremendous dual-threat game against the Golden Flashes.

Missed tackles and even more dropped passes continue to hamper this team, though in this game those will get lost due to 667 yards of total offense and a 53-point win. It is starting to become worrisome why the receivers can’t tighten up the drops, this week without the weather to blame. Normally sure-handed Brandon Polk and Miles Sanders even caught the Drop Bug. Both of these issues absolutely have to stop for Penn State to achieve its ultimate goals.

The coaches had their team ready at the beginning of the game, but another unrecovered onside kick against raises concerns. Perhaps a team that knows its desperate with the game at 0-0 does things equivalent competition wouldn’t do, but Penn State has to begin taking care of the details and not rely on its offense to score plenty of points. That starts with the coaches, especially LB coach (and DC) Brent Pry, and new WR coach David Corley, coming over from Army West Point. This was a game to fix those mistakes; unfortunately, it hasn’t happened yet. The Lions have one more opportunity to iron these details out this Friday night against Illinois before things get serious against the Buckeyes.