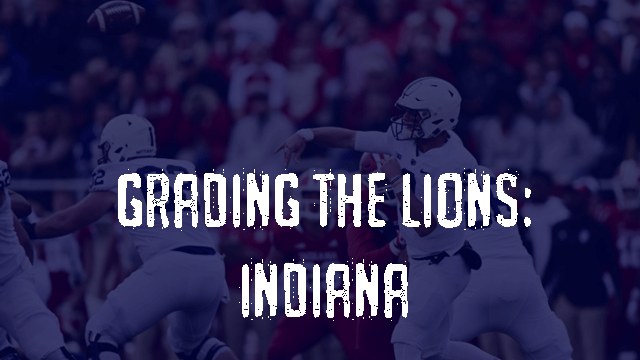 This was a much-needed win, though it felt like another loss. With the season at a crossroads, Penn State, first and foremost, needed to leave Bloomington scoring more points than the Hoosiers. Among the many goals the coaches surely had for this game, they achieved the most important. However, the issues we’ve now come to expect – dropped passes, missed tackles, and the inability to close a team out – plagued the Nittany Lions again. The Lions has a now-ominous 12-point 4th quarter lead, and had to fend off a late, long Indiana TD pass and a recovered on-side kick to secure the victory. Still, amidst a familiar 4th quarter collapse, the team was able to overcome the issues to win the game, despite playing a far-inferior opponent to the prior two. Here are the grades for how the team performed in the 33-28 win at Indiana.

In the season preview, I predicted Penn State would win 28-10. I thought the Lions defense, while vulnerable against the run, was talented enough to snuff out Peyton Ramsey and the Hoosier offense. The Indiana running game began with body blows to the Penn State underbelly, helping them overcome a relatively slow start by Ramsey. In the end, Stevie Scott ran for 138 on 5+ YPC, and the Lions’ defense gave up multiple runs of 20 yards or more. The grade would be worse, but they stepped up late to shut down the Hoosiers with a couple sacks. The long touchdown late in the game was inexcusable, though. 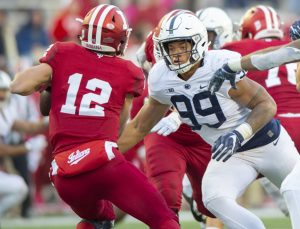 DE Yeter Gross-Matos led the team and tackles and has 2 sacks of his own, but Toney played like a man possessed down the stretch, with 4 sacks for the game to help seal the win.

In the special team evaluation after the Michigan State, I was hard on both K Jake Pinegar for inaccuracy and P Blake Gillikin for not pinning the opponent inside the 20. Pinegar was perfect on field goals (he has a PAT blocked), and Gillikin has 2 punt inside the 20. The fake punt was a train wreck, but that’s not on Gillikin. KR Jonathan Thomas nearly scored on a great 94-yard kick return, and KR KJ Hamler added a 58-yarder to flip the field. But 3 muffed punts and a failure to recover the onside kick are just not good enough, despite the windy conditions.

He averaged more than 40 yards per punt on a day when field position was very important, pinning the Hoosiers inside their 20 twice. I actually like the idea of using Gillikin, a legitimate athlete, to execute a fake. The play design and execution, of course, need work. 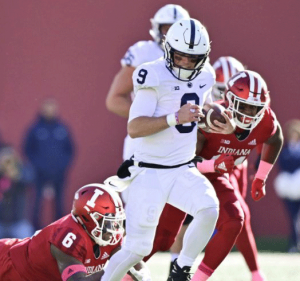 Quarterback Trace McSorley willed the offense to victory with his legs rather than his arms down the stretch.

The offense is a tough group to grade. QB Trace McSorley had another bad game passing, with a completion percentage just over 50, and around a 6 yard YPC. He was effective in the running game, though, adding 107 rush yards and 2 TDs. Miles Sanders was effective early, but the receivers…this group, now adding injuries to the list of issues they’ve experience this year, continues to drop passes. Just as Juwan Johnson seemed to be turning the corner, he goes out with an injury. The drops do not seem likely to stop, and have become contagious. It was good to see Tommy Stevens come in and be effective, and Penn State has found its tight end in Pat Freiermuth. The passing game has to improve if this team is going to step forward, starting with its QB and extending to the receivers. Hopefully the injuries are not significant.

He willed the team to victory running the football.

The coordinators and position coaches have really disappointed this season. Wide receivers coach David Corley does not appear to be effective, with his unit regressing as the year is progressing. Ricky Rahne, in his first year as offensive coordinator, does not yet know how to call the four-minute offense to slam the door. Brent Pry’s defense has been predictably soft against the run, as was to be expected given the losses. But, the secondary continues to drop interceptions and make key plays to get the ball back to the offense. The in-game coaching must be improved across the board.

But while many fans think the sky is falling in Happy Valley, James Franklin’s comment this week that the team is “still ahead of schedule” is accurate. For the last 3 years, Penn State was the beneficiary of a starting NFL WR (Chris Godwin), and generational talent at running back. The program continues to restock its cupboard of blue-chip recruits, and we knew after the sanctions that the depth would be the last thing to be rebuilt. The Nittany Lions’ starters are as good as anyone’s in the country. There were many starters lost on offense and defense from a year ago. So until Penn State can reload to the level Alabama, Ohio State, and Clemson (something most teams are never able to do), there has to be an Outback/Citrus Bowl year (likely at worst) while the roster is refreshed. But if the Nittany Lions can’t get the front seven settled, the next three games could be tough sledding.