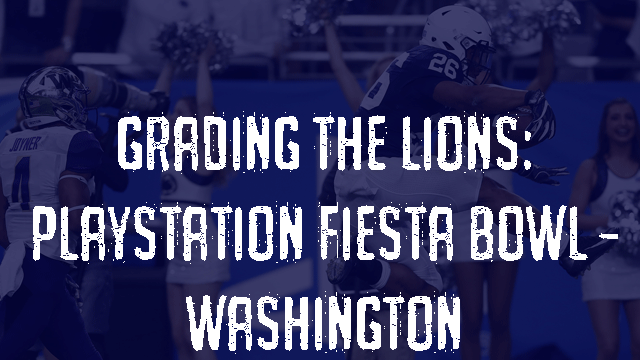 The Fiesta Bowl has been fun for Penn State through the years. Now 7-0 in Tempe/Glendale, Penn State finished 2017 with an impressive offensive performance in a 35-28 win over a strong Washington team who (like the Nittany Lions) was two one-score road losses away from being undefeated. That said, in PSU Zone’s Big Ten bowl game predictions, I suggested that the CFP committee put the B1G’s best teams in matchups the committee thought they would win. I thought Penn State’s strength (its offense) would win the battle against Washington’s strength (its defense), and that its pass rush would be the difference to tip the scale in Penn State’s favor. The game played out pretty much that way, with great performances by Penn State’s stars, timely 3rd down conversions and key defensive stops. After a shockingly successful 2016 campaign that saw the Lions come out of nowhere to win the conference, they followed it up with another top-10 finish and an impressive NY6 bowl win over the team picked to be in the playoff ahead of them last year. Below are the grades from the Lions’ victory.

The defense turned in a bi-polar performance, but with much more good than bad. Ohio State exposed what was a suffocating secondary as being susceptible to big plays, and they gave up their share of those against the Huskies. A 69-yard TD run by Myles Gaskin, and a 28-yard TD pass from Jake Browning to Aaron Fuller kept Washington in the game. But without the run, Gaskin had a pedestrian 29 yards at 2 yards per carry (and still finished below 100 yards), and Browning only had 175 yards for an offense that had been averaging over 36 points and 400 yards per game. 4 sacks, a fumble recovery and around a 50% third down conversion percentage. 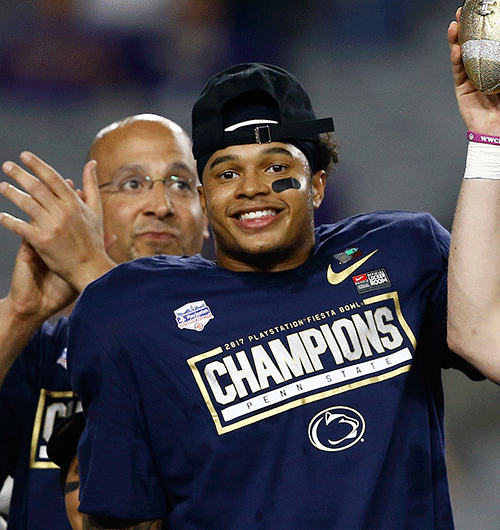 Allen had 6 solo tackles among 7 overall. The first component that leads to sacks is solid coverage, and wrapping up receivers when they catch the ball minimizes yardage. Allen caps off his Penn State career forever linked to Grant Haley for the electric TD against OSU and key 4th down stop against Wisconsin in 2016, and will be remembered for his ferocious hits, leadership, versatility and open-field tackling.

Not much was asked of the special teams, save the late [missed] field goal attempt. James Franklin rightly elected not to have Saquon Barkley return kickoffs, and there was a distinct drop-off with Miles Sanders. Tyler Davis missed a critical field goal, one that he has to make in that situation, which would have put Penn State up 10 with 34 seconds remaining. He was perfect on 5 extra point attempts, but the Lions will need to upgrade the field goal kicking next season.

With the completely unfair task of replacing Barkley in the return game, he averaged 14 yards on his 4 returns, with a long of 23 yards.

It’s a shame the offense turned the ball over 3 times, because that was the only detractor from an otherwise dominant performance. The turnovers also allowed the final score to be closer than the game actually was. In what will surely be his final college game, Saquon cemented his legacy as the greatest Nittany Lion of them all with 175 total yards, a 92-yard lightning bolt that all-too-much harkened back Ki-Jana in the Rose Bowl, and his trademark Defender Hurdle to net a key first down late in the game to extend a drive. DaeSean Hamilton had a great final game as a Nittany Lion, turning in a 110-yard, 2-TD performance. But hands-down, there was one member of the offense who was most responsible for the 545 yards of offense Penn State hung on Washington. 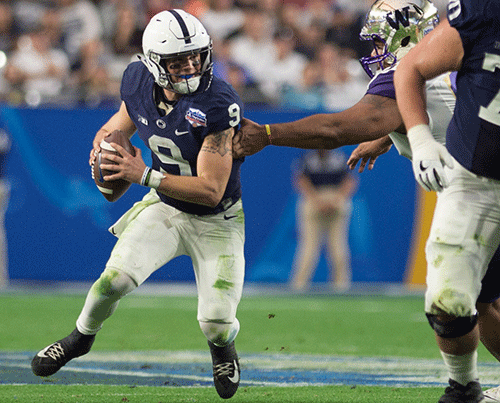 McSorley threw for 342 yards and 2 TDs while running for 60 more yards.  The interceptions were the result of a great play by the Husky corner and a tipped pass. The reward, however, far exceeded the risk of McSorley throwing into traffic. He made timely, accurate throws and converted critical 3rd downs late in the game to burn critical time off the clock. He has the moxie of Matt McGloin, the running ability of Rashard Casey, the leadership skills of Kerry Collins and the sheer will to win of John Shaeffer. McSorley positioned himself for a Heisman run in 2018, and Penn State for even bigger things.

The offensive game plan, against one of the best defenses in the country, was perfect despite losing both Joe Moorhead and Charles Huff to Mississippi State before the bowl game. The coaching staff really seems committed to improving. Finding themselves in a similar situation as they did in the Rose Bowl and against Ohio State this year, the coaches elected to be aggressive, passing on second and third down. The field goal was the right call after the false start penalty, and the defense was more aggressive than the Rose Bowl and OSU games while still preventing the deep pass. The Lions came out prepared and executed, forcing Washington to play its game rather than the other way around.

Penn State wins a bowl game for the first time since beating Boston College in the Pinstripe Bowl James Franklin’s first year. It wins a NY6 bowl for the first time since Kevin Kelly, Michael Robinson and the 3-OT Orange Bowl in 2005. The Lions win the Fiesta Bowl for the first time since Wally Richardson and Curtis Enis beat Priest Holmes, Ricky Williams and Texas in 1996. The 2017 edition was 6 points shy of a perfect season, losing two games by 4 combined points, and walked into Columbus and played Ohio State even. While having to suffer losing its top receiver, tight end and [likely] all-world running back, Penn State will continue to stock the cupboard with depth at every position. They get Trace McSorley back, and look to expand Tommy Stevens’ role to supplement Miles Sanders in replacing Saquon Barkley. The Nittany Lions get Ohio State, Michigan State and Wisconsin at home, setting themselves up for another special season in 2018. 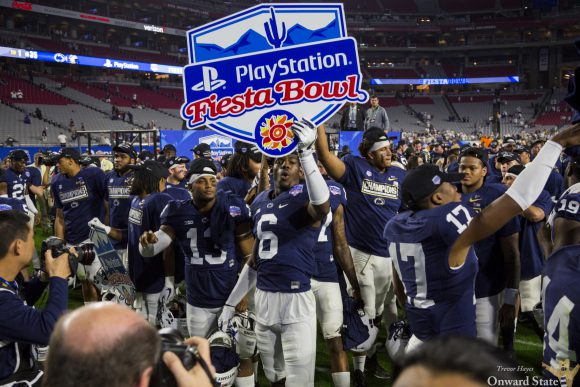