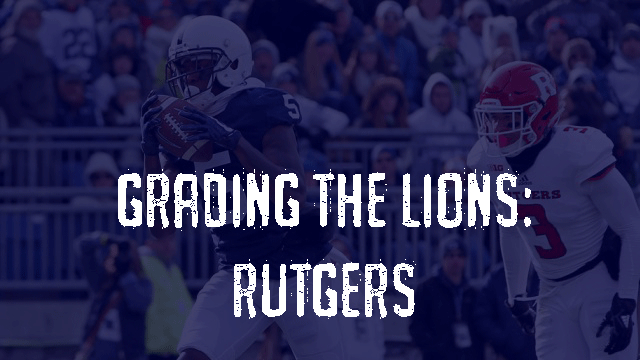 Normally the best medicine a coach could for after back-to-back season-crushing road losses would be Rutgers. In our season preview I labeled them a dumpster fire and predicted Penn State would win 59-0. But for much of the first half of Saturday’s game, it almost felt like the sky was falling. Those of us who remembered the year well screamed “1999 all over again” as Penn State looked to be in a fog, sleepwalking through the game’s first twenty minutes. Then, the Nittany Lions remembered who they were playing and woke up. To its credit, Rutgers has taken a nice step forward this year under coach Chris Ash, playing stout defense and devising a game plan that shut down the best player on the field.

Rutgers “jumped out” to a 6-0 lead, but that would be it for the afternoon. LB Jason Cabinda led the team in tackles again, which usually signals a Penn State victory. LB Brandon Smith also had a great afternoon, accounting for 4 solo tackles among his 10 total for the game. The secondary held the receivers in check as well, allowing 43 total passing yards. They could have played all afternoon…6 points was all the Scarlet Knights would get. It was nice to see the second team shut the door late in the game, if for nothing more than to let the final score reflect the level of domination in the game.

Brandon Smith had his breakout game against Rutgers. He led the team in solo tackles and ensured the Knights couldn’t just run away from Cabinda to be successful

Not much was asked of the special teams, as Penn State flexed its muscles in the beginning of the second quarter and never looked back. P Blake Gillikin kept the field position in check while the defense solved the passing and running of Rutgers QB Giovanni Rescigno. The returners were held in check but the coverage units contained Rutgers returner Janarion Grant, allowing an average of 20 yards on kick returns. 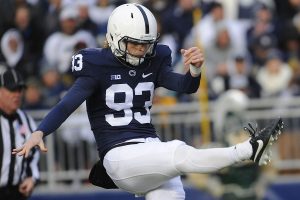 Punter Blake Gillikin has been a standout on special teams all season long. His performance against Rutgers was no different.

Gillikin again gave the Lions a field position advantage, which was especially critical early in the game. A hidden stat in addition to the 40+ yard average is that only one of his punts was able to be returned.

This is a difficult group to grade, given the uneven performance they turned in. However, until the offensive line becomes even sporadically competitive, a B is as good as the overall unit can hope for. Again, an opponent designed their game plan to stop RB Saquon Barkley. And again, they did. Barkley has shown amazing perseverance throughout these last three games following Ryan Bates’ injury against Ohio State. Christian Hackenberg seemed to give up under similar conditions in 2015. Despite jailbreak-run blitzes and linemen that just totally missed their blocks, Barkley managed to tie Curtis Enis for second on Penn State’s career rushing touchdown list. He even made a spectacular leap over a defender to set up one of his two scores. TE Mike Gesicki had a good game and scored on a wide open pass play. WR  Juwan Johnson seemed to catch everything near him and converted several first downs in the game. It appears that there should be several candidates for the Offense Game Ball; however, in reality, there is only one.

McSorley, who seems to have taken this team on his back. His postgame comments indicated frustration with teams taking Barkley away, but that the team needs to be and is prepared to win in other ways. McSorley himself set a new Penn State record for total touchdowns. He should be given a lot of credit for the job he’s done over the past two years. Few quarterbacks would have had his level of success. He has already made a strong case for Penn State’s best-ever QB and has a whole year to go.

Rutgers is better than they have been. The defense played well and shut down a talented opposing QB. However, at some point, the coaches have to be responsible for the extended inability to get Saquon Barkley the ball with even the slightest chance of making a play. He was open on a wheel route during one of Johnson’s catches, but either choice of receiver would have been right on the play. Clearly, it is a difficult challenge, but had they been able to address the issue sooner Penn State would likely be undefeated.

It is an absolute shame that one injured lineman will likely cost Saquon Barkley what should have been a unanimous Heisman Trophy. To be fair, the sanctions are still visible in the narrowing yet still-present gap in depth the Nittany Lions have. But Barkley is arguably the best running back in school history and inarguably the best all-purpose player by a long shot. He has said all the right things about staying positive, doing what he can to help the team, and such. He picks up blocks, sells his fake handoffs while 4 defensive players swarm him regardless of whether he has the ball or not, and still makes plays that no human being should be able to make. It will be interesting to see whether Barkley can reach 1,000 rushing yards, and whether it will be enough to allow him to take home the Heisman. It now will likely depend on the late-season performance of QBs competing for both playoff berths and Heisman immortality.

The silver lining might be that Penn State appears to be in good standing for a NY6 Bowl. Though current projections have them going to the Outback or Citrus Bowls, many of the teams above them in the CFP still have to play each other (Auburn, Alabama and Georgia anyone?) and Ohio State may very well lose to Wisconsin or Michigan. Wouldn’t a rematch with USC in Glendale be something?