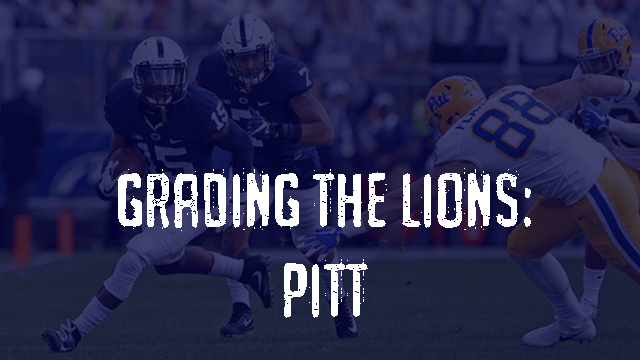 Regardless of your feelings about whether Pitt should be an annual rivalry game or not, Penn State players, coaches and fans have been waiting for this game since a year ago. The Lions should have won in Pittsburgh, and the game had huge ramifications as the season played out, ultimately costing them a spot in the playoff. After running all over Akron, Pitt came to Happy Valley in throwback uniforms ready to play in their Super Bowl (keychain manufacturers at the ready) in front of more fans than will attend the next two of their games combined. Penn State rose to the challenge, winning by 3 scores and never being seriously threatened by a weaker (though maybe over-caffeinated) opponent.

This might be too soft on a group that allowed a mediocre (at best) offense to have a nearly 2:1 advantage in time of possession. This is a misleading stat with the explosiveness of the offense, similar to the 1994 unit, that scored so quickly the defense had more opportunities to be on the field. Pitt showed they can run the ball, but like the ’94 group they bent but rarely broke, forcing 2 field goals from inside the 15 yard line. They allowed Pitt RB Qadree Ollison a game-best 6.4 YPC, but held him under 100 yards and out of the end zone. The run defense was exposed a bit, but they forced a lousy game from ex-USC and 5-star recruit QB Max Browne, who had a QBR under 10. The unit also registered 5 sacks (2 by Shareef Miller) and intercepted Browne twice as well.

A perfect day by Tyler Davis, and another strong game from Blake Gillikin. DeAndre Thompkins didn’t break a long punt return, but offers a big threat each time he’s back there. He averaged 10 yards per return. The coverage unit totally shut down Quadree Henderson, clearly part of the game plan. Gillikin’s directional punting and great coverage completely eliminated Henderson from the return game. That said, Barkley needs to stop going out for kick returns. If they don’t trust Miles Sanders to hold on to the ball, there has to be another option available to return kicks to ensure Barkley doesn’t suffer an unnecessary injury.

The ability to strike quickly will help this team this season. They will never be too far behind, and can flip the momentum on any given play. Barkley’s rushing numbers look unspectacular at first glance (88 yards), but he had 6.3 YPC and a rushing TD. He was also Penn State’s leading receiver, with an amazing catch-and-run TD as McSorley’s third option on the play. He is as good as any player in the country, week in, week out. McSorley’s accuracy does not seem to have improved from last season. I was afraid Chris Godwin’s skill was covering accuracy issues (much as Allen Robinson was responsible for a lot of Christian Hackenberg’s success as a freshman). He had some nice downfield throws on the run, but the mid-range throws from the pocket are a cause for concern, albeit a mild one. McSorley’s running continues to be a huge asset, keeping the defense from keying on Barkley. Mike Gesicki had a good game and two nice TD catches. His hands are underrated.

To completely nitpick, the success of the Pitt run game was annoying and will have to be addressed before conference play. In general, though, this team came out focused, not overly emotional and took care of business. There was no early-game lapse like last year’s team. The entire Pitt community’s obsession/inferiority complex with regard to Penn State had to make it hard for the players not to comment throughout the week. Franklin kept his team focused on the goal, and rightly allowed them to vent after the game. This is his team, and everyone is buying into the system.

Pitt needs to remember its place in the current college football climate. Penn State does NOT owe them an annual game because of history and geography. It was Pitt that refused to join Penn State in an all-sports conference in the early 1980’s, opting instead to prioritize its basketball program when joining the Big East. The athletic administration failed to realize that Pitt needed Penn State much like Oklahoma realizes it needs Texas. Now Pitt finds itself in the best historical basketball conference and is generally not competitive with the top teams in football (the 2016 Clemson game of course a notable exception). The basketball program has declined, making the move to the ACC all the more questionable. Until Pitt commits to prioritizing and improving the football program and gameday experience for its fans, it will continue to be at sitting at home New Year’s Day and most of the week before.