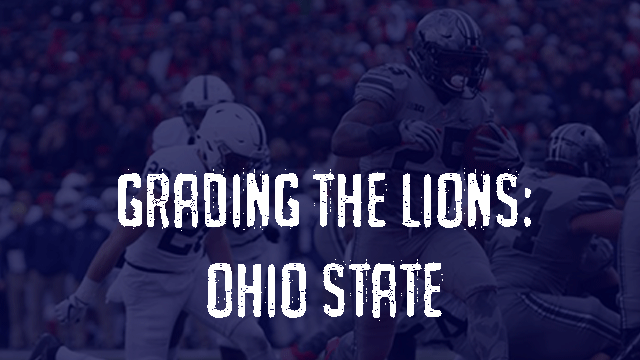 The showdown in Columbus lived up to its billing as the game of the year in college football. It had splash plays, turnovers, controversy, and big-name players making big-name plays. Ohio State is one of a very few teams with layers of NFL-talent up and down its roster, which allows it to reload each season. Games like this help a program like Penn State really understand how it stacks up against the elite programs in the sport. Four years ago, the Buckeyes dominated the Nittany Lions 63-14. I remember thinking it would be a really long time before they could actually walk into the Horseshoe and compete. Saturday’s game served notice that last year’s Rose Bowl was not a fluke. Penn State has officially returned to upper-echelon status in college football, and its young talented depth players will continue to fill in the gaps created by injury. Penn State’s program is running a marathon, not a sprint, but Saturday showed that they are very near the finish line. That said, there are some areas needing legitimate improvement to finish the current year strong.

Barrett was on fire, but the defense was totally unable to stop Ohio State in the fourth quarter. Wide open receivers and an inability to contain the Buckeye QB running the ball plagued the defense in the second half. A pass interference penalty continued a drive that led to Ohio State’s second touchdown. Marcus Allen, not Jason Cabinda, led the Nittany Lions in tackles, signaling that too many plays were getting to the second level of the defense. The defense seemed to be unsure whether to sell out for the blitz or drop into coverage, leaving the linebackers in no-man’s land, with Ohio State receivers running free. The unit played well in the first half, but injuries and depth caught up with them in the second and they wore down.

Miller had 5 tackles and a sack. He was the best player on a defensive front that was collectively about a half step away front radically changing the outcome of the game.

Anytime you can start a big road game with a touchdown on the opening kickoff, it jumpstarts your offense while taking the crowd out of the game right off the bat. And the fact that it was Saquon Barkley who scored obviously shell-shocked the Buckeyes. Blake Gillikin had his first shank of the year, and the punt block couldn’t have happened at a worse time for the momentum of the game. Tyler Davis was perfect on extra points and hit his only field goal from only slightly farther than PAT-range. The coverage units didn’t allow a huge gain, and Koa Farmer did a great job once the Buckeyes started actively avoiding Barkley, contributing a 59-yard gain on his longest return. 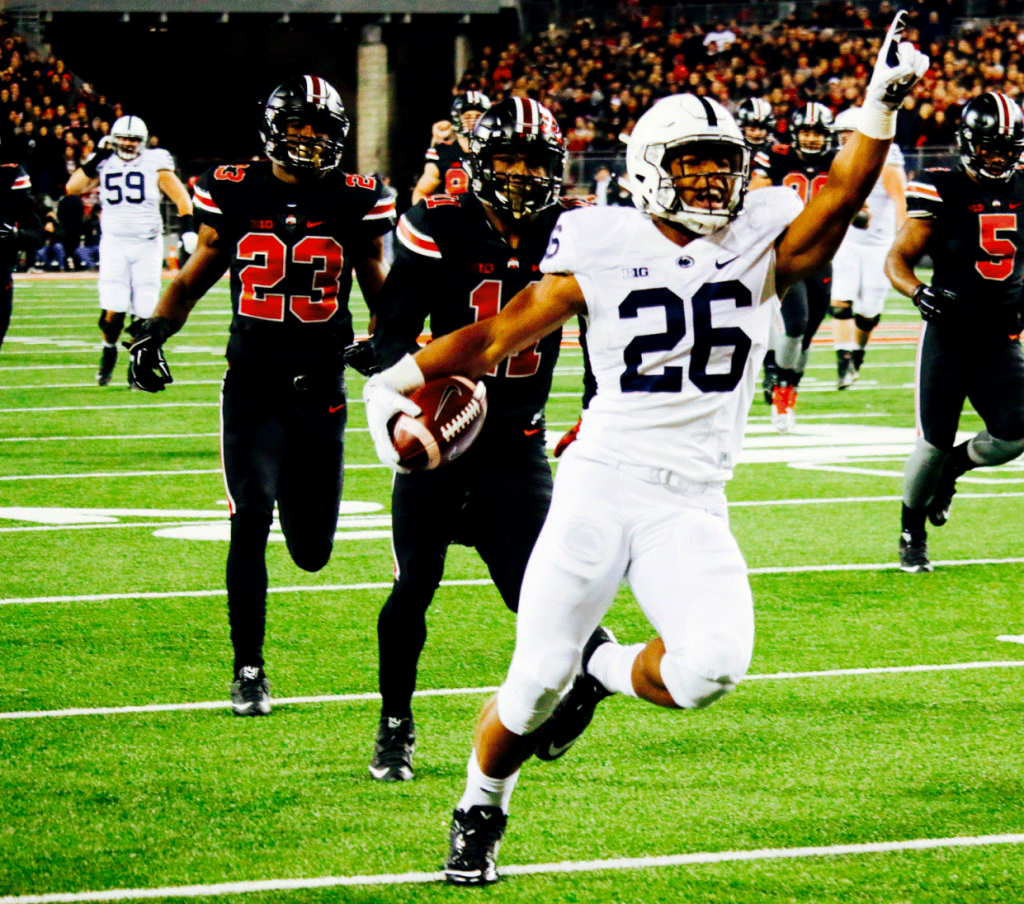 All together now: it is PERFECTLY FINE to have Barkley returning kickoffs. Punts are another story, which is why he’s not back there. He is the best weapon the Nittany Lions have, and the coaches have realized that getting him the ball in space has the potential to create electricity.

For much of the first half and again in the third quarter, it looked as though Penn State would run away from Ohio State. It seemed unbelievable to have an 18-point lead at any point during a game in Columbus, let alone a 15-point lead in the fourth quarter. TE Mike Gesicki had a nice game, with his usual 3rd down magic. Trace McSorley played another inspiring game, and finished with a QBR just under J.T. Barrett’s (79 to 77). But when Ryan Bates went down early on the game, the Buckeye defensive line began to take over the game. Chock full of NFL talent, the line became very disruptive to McSorley and running game. They tried to line up and run three times from the red zone late in the game, but it was completely futile. It’s now become an issue that Barkley is unable to generate rushing yards. He is still a game-breaker in the passing and return games, but the offense is at its best when he is getting his yards on the ground. Without a running game, the repeated failures of the Nittany Lion offensive line made traditional vertical passing nearly impossible, despite McSorley’s ability to extend plays. Even their final touchdown was a prayer that DeAndre Thompkins wrestled away from the Buckeye defensive back. The line will have to improve when Penn State faces its next quality opponent.

McSorley did all he could to will his team to victory and led the team in rushing. He has stepped up his game with the improved competition, proving once again that rises to the challenge.

This game was designed for Ohio State to win. They draw Penn State the week after the Lions played Michigan, at home, and coming off of a bye. That said, Penn State got off to the best start it could have hoped for. The kickoff return and subsequent touchdown after a fumble covered the fact that Ohio State outgained the Lions 2 to 1 in the first half. What’s more, the Ohio State coaching staff out-adjusted the Penn State staff in the second half, typically Penn State’s specialty. There is nothing the staff could have done to match the talent of the opponent, but like the Rose Bowl they got far too conservative with a double-digit lead. Up by 15 and following what should have been a back-breaking fumble recovery at the OSU 42, a predictable running play, an incompletion, and another predictable running play preceded a blocked punt that was horribly-executed by the line. The next possession, the Lions finally were able to complete a sizeable gain to WR Saeed Blacknall, setting them up with a first down at the OSU 7 yard line. Watching 3 runs up the middle that had no chance of succeeding reminded me of the 1979 Sugar Bowl against Alabama. In both games, Penn State could have run the ball 20 times up the middle and never scored. The problem was the refusal by the play callers to take a risk. The USC game last year should have reminded the coaches what happens when you try to sit on a lead on the road. By that time, it was clear running Barkley would not work. They needed to involve the receivers in the game plan more and be willing try to win the game with their best players.

In our season preview, I predicted Penn State would lose a close game against Ohio State. In hindsight, to expect the Lions to lead the entire time and be in a position to close the door multiple times was beyond any reasonable expectation. Teams like Ohio State and Alabama have 5-star talent at every position, 2 and 3 layers deep. They have no weaknesses. While it is initially disheartening to feel like Penn State gave the game away, it is important to look at the game through the continuum of season-over-season progress. They matched an elite team coming off a bye week on its home field. Gone are the days of 49 and 28-point thumpings in Columbus. The challenge is that even elite teams trip up and lose games they thought they had. As long as James Franklin has the team moving in the same direction, and the recruiting pipeline continues to load up the cupboard, Penn State will continue to be in position for title runs. This game confirmed, without a doubt, WE ARE back.