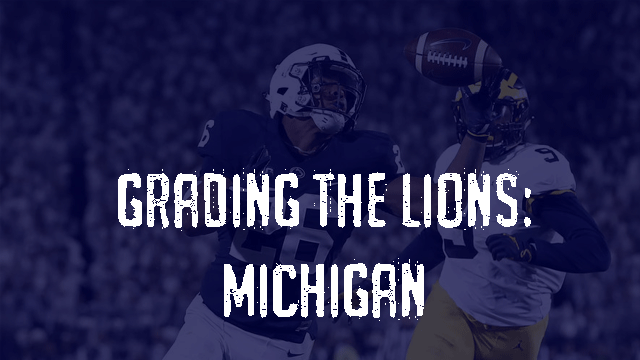 The only knock on the Nittany Lions throughout the perfect first half of its season has been the lack of a quality opponent against which to measure themselves. That resumé gap was filled Saturday night against the Wolverines. Coming off of their bye week, Penn State had the opportunity to prove itself worthy of the #2 ranking against the first of three quality opponents, who were all too hungry to dethrone the Big Ten champs. In front of a record crowd, a full-stadium White Out and a national College Gameday showcase audience, Penn State throttled Michigan 42-13 to atone for the 39-point loss a year ago in Ann Arbor.

As the offense ripped off two quick touchdowns, the defense was busy shutting the Wolverine offense down. Michigan came back with a touchdown off of an interception to cut the lead [nearly] in half, sparking a 13-point second quarter. This swing quelled Penn State’s momentum from the first quarter. The second half, however, was a different story. The defense came out inspired, led again by their senior leader Jason Cabinda. Michigan did not score in the second half, and the defense put to rest the talk about Michigan’s elite defense. After 7 games, Brent Pry’s unit still leads the FBS in scoring defense, the only stat that really matters. 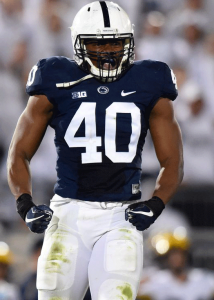 Cabinda registered a game-high 13 tackles and recorded a sack. Having a linebacker consistently lead the team in tackles signifies that the ball isn’t getting behind the defense, the defensive line is consuming their opposing counterparts, and that the defensive playmakers are finishing the plays. His disciplined, efficient technique is poetic to watch for a fan of good defense.

Tyler Davis hit all six extra points, Blake Gillikin only had to punt two times, and the kick and punt returners were generally held in check. Michigan only had one decent return off of a Penn State kickoff. Special teams is usually the X-factor that can tip the scale for one side over the other. In this game, there was a group that provided that advantage all night long, and contributed to an early Michigan mistake that took the air out of its first touchdown. That group gets our special teams game ball…

The Penn State faithful waited a year to get Michigan on their field for revenge. Their ire directed at Michigan kicker Quinn “sleepover” Nordin caused him to miss the first extra point. They did not let up on Michigan all night, and were rewarded with a great performance by their team. The fans give Penn State the best home field advantage in college football, and definitely made things miserable for the Wolverines on all sides.

They can’t stop him, they can only hope to contain him (and they didn’t even do that). Northwestern sort of provided the blueprint for how to stop Saquon Barkley, so Michigan either didn’t watch the tape or decided to do something different. Barkley showed once again that he shines when the lights are the brightest, opening the game with an electric 69-yard touchdown. He did look a little uneasy as a receiver (by his standards), dropping a long pass in the first half and bobbling his long touchdown that put the game away. But that ended up being one of three splash plays that only enhanced his Heisman profile. The most encouraging outcome of the offensive side of the game was the return of QB Trace McSorley’s running game, which had been absent since the Iowa game when Saquon Barkley had 211 rushing yards. When McSorley is a threat to run, the read-option is deadly. Mixing in some early QB runs seems like the key to ensuring Barkley isn’t bottled up. Mike Gesicki had a key catch to set up the touchdown late in the first half, and four receivers had at least three catches to keep the “elite” Michigan defense off balance. 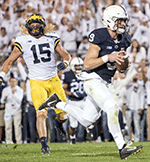 In a game dominated by explosive offensive and splash plays galore, it was QB Trace McSorley’s leadership and sheer determination that earned him this week’s Offensive Game Ball

Trace “McSCOREly” who, beyond his great running and throwing, provided excellent leadership. His third rushing touchdown was pure effort, and he was not going to be turned away. When the leader of the offense is laying it all on the line, the rest of the team responds. It has really been fun to watch the young QB develop into a true leader and motivate his teammates to perform their best.

It is not surprising that Penn State had a losing record in Whiteout games entering this year’s Michigan game, despite the decided advantage the environment provides. They typically reserve it for the best opponent, and there is a lot of pressure on the home team. This year, ESPN brought the College Gameday fanfare, and the team was ranked #2. Expectations couldn’t have been higher, and there was a ton of noise and distraction around the young men who had to play the game. Being careful not to quench that emotion but directing it toward energetically executing the game plan is a careful balance. The coaches had an extra week to prepare, and they made the most of it. They got their Heisman-hopeful running back going, spread the ball around, and utilized the entire toolbox of their stud QB. They again made the right in-game and halftime adjustments, which led to a second-half shutout.

James Franklin often uses his first statements in the postgame interview to praise the opposing team. After this game, though, he instead praised the fans, and for good reason. The “Harbaugh effect” is alive and well in the Big Ten, and I got the sense that Franklin did not appreciate the end of last year’s game nor some of the recruiting tactics he used to lure kicker Quinn Nordin away from Penn State (the fans seemed to know exactly who he was when he lined up for the extra points). Because it wasn’t directly addressed, we are left to fill in the blanks, but Franklin took the high road and operated with integrity. It was a great move to ask the reporter who the next opponent was, especially since that is usually the mantra he repeats immediately after a win. Demons exorcised, first dragon slayed. Ohio State, Ohio State, Ohio State.