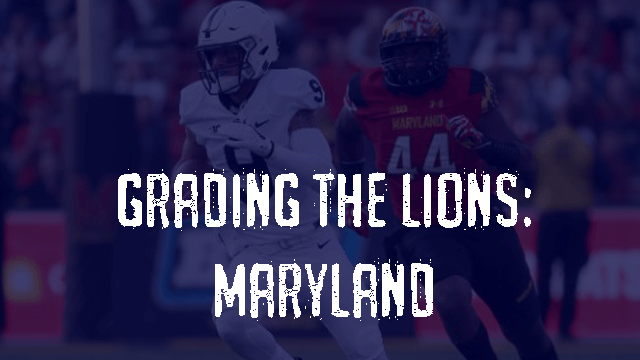 Talk about saving the best for last. On paper this game seemed like it would be an easy one for Penn State, but the Nittany Lions turned in a complete performance in dispatching the Terrapins on their home field. Games against lower-tier conference opponents should be stat-padding games, and a chance to give valuable real-game minutes to backups while avoiding further risk of injury to the star players. In our season preview, we indicated that a 10-2 Penn State team should be good enough to get a New Year’s 6 bowl bid; that looks to be exactly where the Lions sit, at the moment favored to play TCU or Notre Dame in the Cotton Bowl. But first thing’s first; the grades for the regular season finale.

Maryland didn’t have a chance. The defense suffocated the Terrapin offense, holding Maryland to 1 for 16 on third down and stopping all 3 fourth downs. They also recovered two fumbles and allowed a single field goal. The Terrapin offense was overmatched by superior defensive talent that was peaking in its execution. 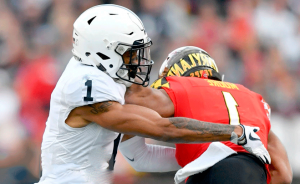 Campbell who had four solo tackles. Campbell had a solid year opposite Grant Haley, and played his best game of the year against Maryland.

The special teams did its job. The kick and punt returners did not have any significant returns, and Blake Gillikin had four punts averaging 45 yards each. Tyler Davis was 9-for-9 on extra points and hit his only field goal.

In his final game as a Nittany Lion, Davis had a perfect day.

The story of this game seemed to be the further emergence of Tommy Tuddies, aka Tommy Stevens, who led the game in rushing yards and was responsible for four touchdowns. He has really turned in to the 2004 version of Michael Robinson, with the dream of having the starting QB job to himself the following year. McSorley played another great game, as did Mike Gesicki (how did he catch the one-handed touchdown pass?), but Saquon Barkley had another sub-100 yard game and had less than 100 total yards, including kickoff returns. 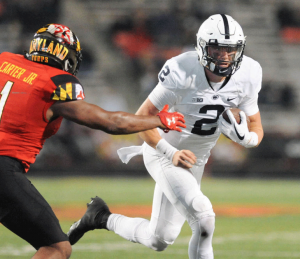 Stevens who broke out in a big way. He led the game in rushing yards and total touchdowns, had the game’s highest QB rating and caught a pass. His football ability is obvious, and the team seems to thrive when he’s in the game.

The game plan was conceptualized and executed flawlessly. Coach Franklin has the Nittany Lions playing very well and has achieved back-to-back 10+ win seasons for the first time since Darryl Clark in 2008-9.

The Old Boys Club seems determined for Ohio State to make the playoff, especially given its similarity to the left-out 2016 Penn State team. It’s a shame that a blocked punt in Columbus and an unnecessary roughness penalty late in East Lansing led to Penn State being 4 points short of a perfect season. But despite major top-end talent overhauls after the bowl game, the Lions will be good for the long haul and will enjoy another NY6 bowl this year.