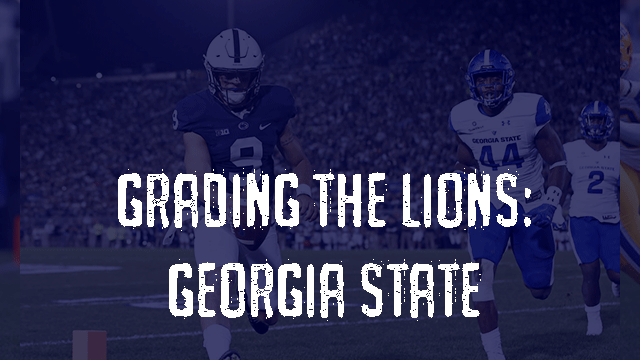 As I wrote in the PSU Zone 2017 Season Preview, the Georgia State game itself exists because Penn State has five conference road games this year. But unlike years past, when a game against an lower-tier team would be played at noon in front of “only” 95,000 mostly sleepy fans, the game was moved to prime time. High profile recruits were brought in to witness the magic of a night game in Beaver Stadium, with the scales tipped to ensure the Lions dominated. It must have been fun for those high school students to experience the overwhelming advantage granted by 102,000 raucous supporters. While playing a smaller school typically lends itself to a blowout, it was a smart move by the athletic department to move the game to a later start to maximize the recruiting and attendance benefits of the game.

Like the Akron game, it was difficult to exceed expectations. The only true way to gain credibility when playing an opponent like Georgia State was to make it clear that they are overmatched in all phases, and shut them out. In addition, the defense forced 5 Panther turnovers, registered 3 total sacks and recorded 11 total tackles for loss. Marcus Allen returned his interception 50 yards as well. Taz Bateman did run for 100 yards, but only had 3.4 yards per carry. Like the Pitt game, the defense stood tall when it mattered.

Special teams are quickly becoming one of the biggest assets the Nittany Lions have. Tyler Davis missed his only field goal attempt, but was perfect on all 8 extra points. After 8 touchdowns, the Panthers were only able to return two kickoffs, as well. DeAndre Thompkins is always a threat (and is sure-handed) on punt returns, and Barkley returned the only kick he saw 37 yards. Maybe it’s fine if he returns kicks, after all. I’m running out of superlatives for Blake Gillikin. He was stellar again, allowing only one punt return for one yard. Gillikin is himself a Georgia native, who committed to Penn State after the Lions worked him out in 2015 at a satellite camp held at (you guessed it) Georgia State.

This was a great game for Trace McSorley. While not playing to his usual high standard against Pitt, he turned in a terrific performance against Georgia State, throwing 4 TD passes to four different receivers and running for another. He provided the dual threat to which we’ve become accustomed, while still throwing for over 300 yards. He did not focus on only one receiver, and did not overly rely on the deep 50/50 ball. And of course, Saquon Barkley had his fill of splash plays, mostly as a receiver, with none bigger than a stadium record 85-yard touchdown pass. The only negative was that the offensive line (albeit without Brendan Mahon) struggled to line up and establish a running game against a much weaker opponent. Barkley ripped off at 33-yard run, but in general they struggled to press the issue against the Panthers. They’ll need to be able to sustain long drives, again losing the time-of-possession battle. But, 85-yard TD passes will have that effect on a statistic.

It is difficult to get a team “up” for  every game, but James Franklin and his staff continue to do it. The Lions looked great throughout this game, had no turnovers and surrendered no points. They are making adjustments week-to-week and mid-game, and look poised for another special season after completing a perfect non-conference slate. The defense, especially, looked a step ahead of QB Conner Manning all night. Franklin also smartly got valuable game minutes in for backup second- and third-string backups.

Georgia State will learn that you don’t try a field goal down 8 TD’s just to break up a shutout. Line up and try to score a touchdown. I have no problem with Franklin’s timeout at all; the defense earned that shutout. Because Penn State called off the dogs off very early in the 2nd half, Georgia State should have never attempted the field goal. I also have no problem with Tommy Stevens throwing a long TD to Saeed Blacknall late in the game, either. Franklin needs games like this to give his backups real reps, and real opportunities to run the offense. This would have been a much bigger deal in the old days, such as Doug Graber’s tantrum after the 1995 PSU-Rutgers game in East Rutherford. Backup QB Mike McQueary threw a long TD to a wide open receiver, prompting a mid-field confrontation with Joe Paterno. JoePa cussed him out, and Graber was fired after the season. I’m glad it didn’t come to that against Georgia State.

The worry with a relatively soft non-conference schedule is game-readiness going into conference play. A benefit, however, is coming out relatively healthy with the opportunity to rest the first-teamers in the second half. The engine is revved up, and Penn State will be more than ready to head out to Iowa City and kick off the conference schedule under the lights.