Saquon Barkley is the best player available in the 2018 NFL Draft. His skills, abilities, strength, and talent to change the result of any game make him a valued asset for any franchise. And while we all know all the reasons why he should go #1 overall in the draft, unfortunately, he will not. The rationale for why he will not have the prestige of #1 mostly comes down to one thing: The Cleveland Browns.

The Cleveland Browns have the #1 pick in this year’s draft, and they don’t exactly have a good track record in this category. While the past few seasons have been an improvement, Cleveland typically do not draft well for their future (ahem – Johnny Manziel). On top of that, drafting running backs has not proven to be a winning strategy for them. The modern version of the Cleveland Browns have only drafted a RB twice in their history of 1999 until now. Those picks of Trent Richardson and William Green have not exactly panned out to be major stars or contributors to the Browns’ offense. And despite being drafted only in 2012, Richardson currently does not even have an NFL job. 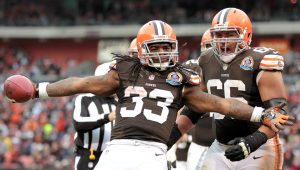 Don’t get me wrong, this is not bashing Carlos Hyde, who is clearly in his prime and coming off his best back-to-back seasons as a pro. But it clearly shows that Cleveland is going in another direction when it comes to the RB position. They are now paying Hyde as a Top 10 back in the league, and they expect him to be that. They also have a more than capable “change of pace” back in Duke Johnson. So why would they choose Saquon #1 overall? When you select a #1 overall pick, it generally is someone who you feel can make an immediate impact on your team.

Well maybe, you say, since Cleveland has the #1 and #4 picks, some team will be willing to trade up to get Saquon Barkley? The last time that any team traded up to a top 5 pick for a running back was back in 1999 and 2000 for Ricky Williams and Jamal Lewis respectively (both for the #5 overall pick). So in the past 17 years, no NFL team has felt the need to trade up that high for a running back. Does that make it right? Probably not, but that is the trend, and NFL teams follow trends.

Beyond the Browns’ ineptitude at drafting, there is another key reason why Saquon will unfortunately not be chosen #1 overall. History has shown that NFL teams prefer QB over any other position when it comes to #1 picks. In fact, the last RB taken #1 overall by any NFL team was Ki-Jana Carter (We Are!) all the way back in 1995! Since that time, an astounding 14 QB’s have been taken #1 overall in 22 years. The next closest position in terms of volume of #1 picks are defensive end and offensive tackle. Based on what we have seen, my guess would be that the Cleveland Browns will follow this QB tendency.

History is not on the side of Saquon Barkley being the #1 overall pick, both in terms of the Cleveland Browns and the rest of the NFL. But maybe that’s a good thing. Do we really want to see Saquon in Orange & Brown? That being said, Saquon is indeed a unique athlete, who is by far the most talented in this draft class. He breaks the mold when it comes to high caliber football players. Maybe he can break the mold when it comes to draft trends in the NFL.